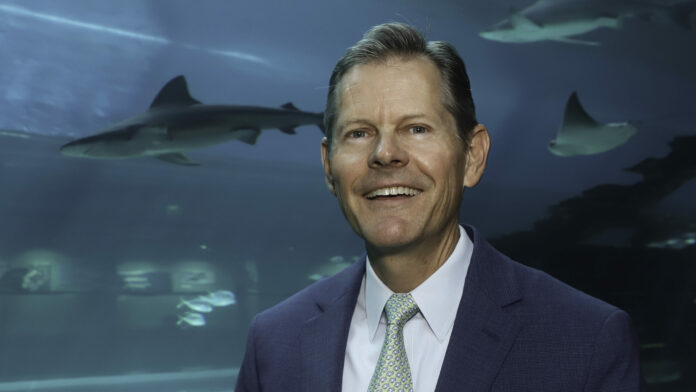 Tom Schmid was chosen as the new President and CEO of the Columbus Zoo and Aquarium. The Board of Directors voted to formally name Schmid to lead the Zoo, The Wilds, Safari Golf Club and Zoombezi Bay.

Schmid begins his leadership role on Dec. 6 after concluding his service as CEO of the Texas State Aquarium in Corpus Christi. At Texas State Aquarium, Schmid led his team to grow the institution to one of the largest aquariums in North America, advancing wildlife conservation work and raising nearly $100 million to support the aquarium’s mission.

“Tom Schmid is widely acclaimed throughout the zoo and aquarium industry to be extremely smart, ethical and passionate about zoos and wildlife conservation,” said Zoo Board Chairman Keith Shumate. “I believe that we have found an individual with the experience to lead this zoo and take it to the next level. In getting to know Tom, I am struck not only by his track record as a leader but also his skills as a listener. I am excited for this community to get to know him and for the Columbus Zoo to move forward under his leadership.”

Schmid brings over 34 years of experience in modern zoological attractions, working in every aspect of operations, both internally and externally, and in institutions accredited by the Association of Zoos and Aquariums (AZA).

From 2012-2013, he served as chair of the board of directors for AZA after serving on the board. In addition, he is on the executive committee of the Coastal America Learning Center Network and a board member of the World Association of Zoos and Aquariums (WAZA.)

“I’m humbled and honored to work alongside this incredible team and to become part of the Central Ohio community,” said Schmid. “What captured my interest — the culture of conservation at the Zoo and The Wilds — is working with rare and endangered species; the staff expertise in animal care and welfare; and the diversified portfolio of parks, which include Safari Golf Club and Zoombezi Bay. This is an extraordinary organization with an exceptional team.”

Schmid also shares his excitement to be part of a team that embraces big ideas and collaborates with community partners in sustainability projects and dynamic and innovative guest experiences.

“The possibilities are endless, and it’s truly an honor to be selected to lead this organization and see what new opportunities we can create together,” said Schmid.

He began his career at SeaWorld in Orlando, FL. Before arriving at Texas State Aquarium, Schmid served as the Director of Operations for NAUTICUS – the National Maritime Center, located in Norfolk, Virginia. He was hired as the Director of Animal Husbandry of Animal at Texas State Aquarium, promoted to Chief Operating Officer in 1998, and then became President and CEO in 1999.

Schmid will follow interim director Jerry Borin, who returned on April 1, 2021, from retirement to lead the organization after the former CEO and CFO resigned following reviews into misusing Zoo assets.