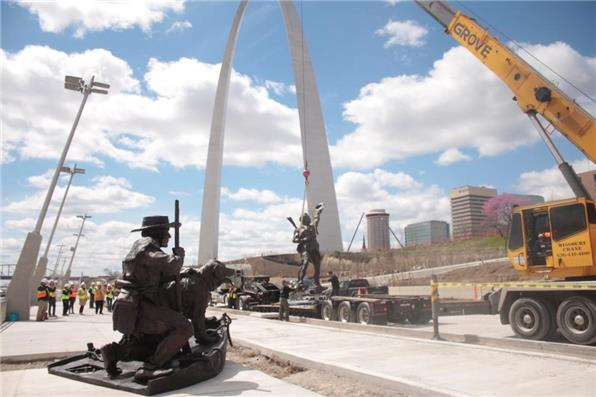 St Louis, MO, USA — After a two year absence, the well-known Captains’ Return statue of Lewis and Clark returned to the St. Louis riverfront on Friday, April 1 as part of the ongoing CityArchRiver renovations. The CityArchRiver project is transforming the grounds surrounding the Gateway Arch into a seamless park experience with biking and running trails, space for outdoor concerts and a new museum commemorating westward expansion.

The Captains’ Return statue, by sculptor Harry Weber, depicting the return of the Lewis and Clark expedition was first installed near the Eads Bridge in September of 2006 to mark the 200th anniversary of that event.

On many occasions during its eight years in that location, it would be submerged in the Mississippi River during routine flooding. The 9,000 pound, 22 foot tall sculpture was removed from the riverfront in April 2014 for restoration while construction of the new riverfront was underway.  Now, almost two years later, the statue is installed in its new location just north of the Gateway Arch on Leonor K. Sullivan Blvd.  This new site is on a section of the riverfront that has been raised by three feet through the project, making the statue less susceptible to flooding and more accessible to visitors.

“We are all very grateful to the people at Great Rivers Greenway, CityArchRiver Foundation, and the City of St. Louis for all their help and support in getting the Captains back where they belong,” said Weber. “All of us connected with the statue including the donors who made it possible are proud to be a small part of the magnificent new Riverfront.”The renovation work, completed at the Tyson Research Center by VMD Sculpting of St. Louis, repaired all of the flooding damage and a new patina was applied. A patina provides color for the exterior of the statue and protects the bronze from corrosion from chemicals in the atmosphere.

Joe Kleimanhttp://wwww.themedreality.com
Raised in San Diego on theme parks, zoos, and IMAX films, InPark's Senior Correspondent Joe Kleiman would expand his childhood loves into two decades as a projectionist and theater director within the giant screen industry. In addition to his work in commercial and museum operations, Joe has volunteered his time to animal husbandry at leading facilities in California and Texas and has played a leading management role for a number of performing arts companies. Joe previously served as News Editor and has remained a contributing author to InPark Magazine since 2011. HIs writing has also appeared in Sound & Communications, LF Examiner, Jim Hill Media, The Planetarian, Behind the Thrills, and MiceChat His blog, ThemedReality.com takes an unconventional look at the attractions industry. Follow on twitter @ThemesRenewed Joe lives in Sacramento, California with his wife, dog, and a ghost.
Share
Facebook
Twitter
Linkedin
Email
Print
WhatsApp
Pinterest
ReddIt
Tumblr
Previous articleA Buzz Price guide to business ethics
Next articlePHOTOS: Audubon Cool Zoo