Coasting For Kids Raises $114,000 for Give Kids the World Village 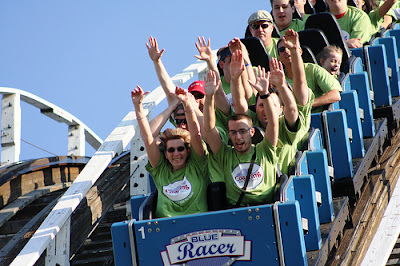 Sandusky, OH, USA (June 13, 2012) /PRWEB/ — Roller coaster fans proved they have big hearts and strong stomachs this Sunday at Cedar Fair Entertainment Company’s “Coasting For Kids” event, which raised nearly $114,000 for Give Kids The World Village(GKTW).That’s twice as much as the event collected in its first three years, bringing the four-year total to more than $200,000.

At 11 Cedar Fair parks across North America, participants raised at least $75 for the privilege of riding roller coasters a dizzying number of times throughout the day, spurring camaraderie and friendly competition. Many contributed far more than the minimum donation for GKTW, a Central Florida non-profit “storybook” resort that provides cost-free vacations for children with life-threatening illnesses and their families.

“Through the overwhelming generosity of Cedar Fair and that of the more than 350 coaster enthusiasts who participated, children with life-threatening illnesses, along with their families, will be able to experience our Village, where happiness inspires hope,” Give Kids The World President Pamela Landwirth said.

At Cedar Fair’s flagship park, Cedar Point, more than 75 participants took marathon rides on the Magnum XL-200 and Gemini. Some logged more than 100 rides in a single day, stopping only for water and a quick bite to eat.

“This year’s riders showed an unparalleled level of dedication and enthusiasm,” Cedar Point spokeswoman Annie Zelm said. “Many have been personally impacted by these special children and their families, and they know that the physical stamina it takes to make it through a day of continuous coasting isn’t much compared to what a sick child endures. We hope to bring at least twice as many riders on board next year and in the years to come as Coasting For Kids gains momentum.”

About Cedar Fair Entertainment Company:
Cedar Fair Entertainment Company is a publicly traded partnership headquartered in Sandusky, Ohio. The Company, which owns and operates 11 amusement parks, six outdoor water parks, one indoor water park and five hotels, is one of the largest regional amusement park operators in the world. Cedar Fair’s flagship park, Cedar Point, has been consistently voted the “Best Amusement Park in the World” in a prestigious annual poll conducted by Amusement Today newspaper.


About Give Kids The World:
Recognized as the highest rated charity in America by personal finance site MainStreet, and also reported by MSN Money, Give Kids The World Village (GKTW) is a 70-acre, non-profit resort in Central Florida that creates magical memories for children with life-threatening illnesses and their families. GKTW provides accommodations at its whimsical resort, donated attractions tickets, meals and more for a weeklong, cost-free fantasy vacation. With the help of many generous individuals, corporations and partnering wish-granting organizations, Give Kids The World has welcomed more than 115,000 families from all 50 states and more than 70 countries. For more information about GKTW and its mission, visit givekidstheworld.org.

Joe Kleimanhttp://wwww.themedreality.com
Raised in San Diego on theme parks, zoos, and IMAX films, InPark's Senior Correspondent Joe Kleiman would expand his childhood loves into two decades as a projectionist and theater director within the giant screen industry. In addition to his work in commercial and museum operations, Joe has volunteered his time to animal husbandry at leading facilities in California and Texas and has played a leading management role for a number of performing arts companies. Joe previously served as News Editor and has remained a contributing author to InPark Magazine since 2011. HIs writing has also appeared in Sound & Communications, LF Examiner, Jim Hill Media, The Planetarian, Behind the Thrills, and MiceChat His blog, ThemedReality.com takes an unconventional look at the attractions industry. Follow on twitter @ThemesRenewed Joe lives in Sacramento, California with his wife, dog, and a ghost.
Share
Facebook
Twitter
Linkedin
Email
Print
WhatsApp
Pinterest
ReddIt
Tumblr
Previous article"Bible Storyland" World Premiere at San Antonio Film Festival
Next articleCedar Fair Parks Offer New Refreshment to Crave