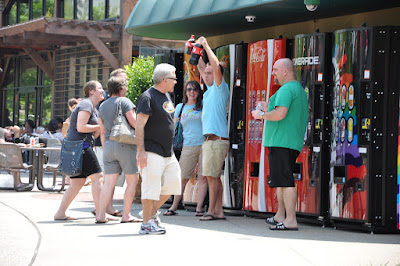 Atlanta, GA, USA (June 20, 2012) /BUSINESS WIRE/ — They have appeared around the world and on U.S. college campuses, and now a Coca-Cola Happiness Machine has struck again – but in a way like never before. Starting just in time for the first day of summer today, unexpected moments of happiness are happening at the World of Coca-Cola at Pemberton Place, where for the first time a Happiness Machine will stay in a single location for an extended period of time.


This seemingly ordinary Coca-Cola® vending machine, located outside the World of Coca-Cola, will deliver spontaneous surprises to unsuspecting and randomly selected Pemberton Place guests now through Sept. 3 as part of the attraction’s Summer Moments of Happiness promotion. These guests may receive their expected ice-cold Coca-Cola or walk away with one of nearly 4,000 summertime prizes such as sporting goods, coolers and digital cameras, all in the name of summer fun.


“Unlike in the past, people now can plan to visit a Coca-Cola Happiness Machine,” said Russell Jacobs, General Manager of Retail and Attractions for The Coca-Cola Company. “With this machine, the question is no longer where will happiness strike again, but when – and who knows, you might be next.”


Since opening at Pemberton Place five years ago, the World of Coca-Cola has welcomed guests from six continents, more than 75 countries, all 50 U.S. states and the District of Columbia. In addition, 11 percent of the estimated 712,000 visitors to Atlanta from outside North America in 2010 experienced the World of Coca-Cola during their stay. Since becoming the home of the 126-year-old secret formula to Coca-Cola in 2011, the Atlanta attraction has seen increased attendance, strengthening its impact on the city’s hospitality and tourism market.


About the World of Coca-Cola
The World of Coca-Cola has welcomed guests from six continents, more than 75 countries, all 50 U.S. states and the District of Columbia. Join more than 5 million people who have visited the Atlanta attraction and experience the history of the world’s most famous soft drink at the dynamic, multimedia home of the 126-year-old secret formula for Coca-Cola. Get closer than ever before to the vault containing the secret recipe, and see the fully-functioning bottling line that produces a commemorative glass bottle of Coca-Cola for every guest. View more than 1,200 never-before-displayed artifacts, take a trip around the world in a thrilling 4-D movie experience and tempt your taste buds with more than 60 beverages from around the globe.


The World of Coca-Cola is located in Pemberton Place, adjacent to the Georgia Aquarium in downtown Atlanta, and is accessible via the Peachtree Center or CNN/ World Congress Center MARTA stations. Consumers with questions may call 1-800-676-COKE or visit our website at www.worldofcoca-cola.com to purchase tickets. Follow us on Twitter at twitter.com/WorldofCocaCola or find us on Facebook at facebook.com/WorldofCocaCola.

Joe Kleimanhttp://wwww.themedreality.com
Raised in San Diego on theme parks, zoos, and IMAX films, Joe Kleiman would expand his childhood loves into two decades as a projectionist and theater director within the giant screen industry. In addition to his work in commercial and museum operations, Joe has volunteered his time to animal husbandry at leading facilities in California and Texas and has played a leading management role for a number of performing arts companies. Joe has been News Editor and contributing author to InPark Magazine since 2011. HIs writing has also appeared in Sound & Communications, LF Examiner, Jim Hill Media, and MiceChat. His blog, ThemedReality.com takes an unconventional look at the attractions industry. Follow on twitter @ThemesRenewed Joe lives in Sacramento, California with his fiancé, two dogs, and a ghost.
Share
Facebook
Twitter
Linkedin
Email
Print
WhatsApp
Pinterest
ReddIt
Tumblr
Previous articleBosch Home Appliances Features at EPCOT’s VISION House
Next article2012 Asian Attractions Expo Breaks Records for Annual IAAPA Show Supporting Asian Marketplace

Illuminarium opens in Atlanta on July 1