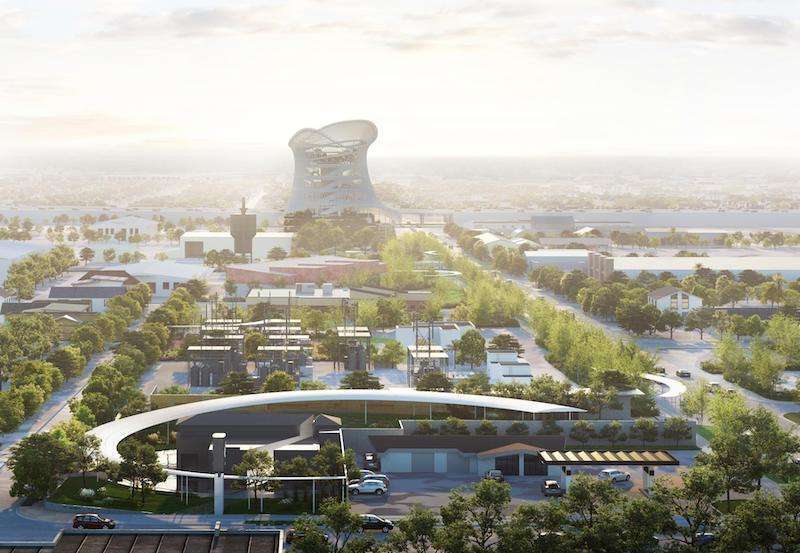 onePULSE Foundation, the not-for-profit established to honor and preserve the legacy of the 49 killed and all those affected by the June 12, 2016 Pulse nightclub tragedy, today announced that Coldefy & Associés with RDAI, Orlando-based HHCP Architects, Xavier Veilhan, dUCKS scéno, Agence TER, and Prof. Laila Farah, has been selected to design the National Pulse Memorial & Museum.

Mayra Alvear, whose daughter, Amanda Alvear, was killed in the Pulse tragedy, and Pulse survivors Neema Bahrami and Brian Reagan were joined by onePULSE Foundation CEO Barbara Poma, Orlando and Orange County Mayors Buddy Dyer and Jerry L. Demings along with local leaders and community advocates to make the announcement during a special event at Dr. Phillips Center for the Performing Arts.

The winning team’s concept design serves as a starting point for discussion and a basis for the design but is not the final, finished memorial and museum. Over the next year, Coldefy with RDAI | HHCP will work to further refine the designs so they can best reflect community feedback.

“The National Pulse Memorial & Museum will honor the 49 lives taken and all those affected while also educating visitors and future generations on the profound impact the tragedy had on Orlando, the U.S. and the world,” said Barbara Poma, onePULSE Foundation CEO. “We are excited to work with Coldefy with RDAI | HHCP and the full team, whose next step is to embark on a master plan for the project, which will include robust community engagement.”

The design concept from Coldefy with RDAI | HHCP features a reflecting pool encircling the Pulse building, which will be integrated into the memorial design. In memory of the 49 victims, a palette of 49 colors lines the basin and radiates towards a peaceful garden planted with 49 trees. The design also envisions a spiraling, open-air museum and educational center with vertical gardens, public plazas, and a rooftop promenade.

“We are very honored that our team has been selected by the onePULSE Foundation to continue this journey together. This is a deeply meaningful project that reminds us how much architecture and landscape can influence our behavior and have an impact on our community; it’s a project that already transcends our entire team in a beautiful, collective adventure,” said Thomas Coldefy, principal of Coldefy & Associés. “Together, we have an opportunity to reclaim a place from terror and darkness and create a new reality, one that brings people together in celebration of joy and love.”

“This design is the one that I personally fell in love with. It gives me peaceful memories and reflections of remembering our 49 Angels. The water running calms the soul. The opening beam of light shining towards the heavens, confirms to me that our Angels are watching over us…,” wrote the mother of one of the people killed in the tragedy in a comment submitted during the review period.

Complementing the National Pulse Memorial, a museum and educational center will pay tribute to all those affected by the Pulse tragedy and serve as an important place for dialogue and education acting as a catalyst for positive change. It will be central to realizing onePULSE Foundation’s credo that “We will not let hate win.”

“…The Museum has a lightness in design, but captures what the Pulse museum should be: A place to educate and bring a message of hope to the world. It will show that Love will forever win. The protruding light up to the sky, sends a signal to the world inviting them to come see what Pulse represented,” said the father of a Pulse victim in a comment submitted during the review period.

Additionally, the Orlando Health Survivors Walk will trace the three-block journey many victims and first responders took the night of the tragedy to get to Orlando Regional Medical Center and extend north to the Dr. Phillips Center for the Performing Arts.

“We will never bring back the 49 innocent victims whose lives were taken on June 12, 2016, or erase the pain that the horrific act brought to so many, but the establishment of this memorial is an important part of our community healing process. Additionally, the museum will not only serve as an important place for dialogue and education, but also further Orlando’s legacy of being a place of belonging, acceptance and respect for all,” said Orlando Mayor and Jury member Buddy Dyer. “As this journey continues, I look forward to continuing to work with the onePULSE Foundation and our community to further ensure we serve as a beacon of hope, unity and love.”

“Having responded to the tragedy as the Orange County Sheriff, it’s been especially meaningful to serve on the selection Jury and see how the design team has captured the spirit of our community,” said Orange County Mayor and Jury member Jerry L. Demings. “The National Pulse Memorial & Museum will provide a place for people to reflect, grieve, heal and honor the 49 Angels, and also stand as a testament to the indomitable spirit and resilience of the Orlando community.”

Launched in March 2019, the unique two-stage global design competition garnered 68 submissions from 19 countries and was led by Dovetail Design Strategists, the country’s leading independent architect selection firm. The submissions were narrowed down to six finalist teams who developed concept designs for a public exhibition and comment period that took place in early October.

“It has been gratifying to be part of the journey that has led to today’s announcement. The design competition —end to end— was created and conducted to generate excellence and it delivered exceptional results,” said Dovetail Design Strategists President Susanna Sirefman. “The Jury, deeply committed to imagining what the National Pulse Memorial & Museum could represent and teach future generations, has selected an inspired, forward-looking concept design that will, when fully developed, set a new, world-class standard.”

onePULSE Foundation plans to build the National Pulse Memorial on the site of the Pulse nightclub with the museum and education center located at 438 West Kaley Street – approximately one-third of a mile from Pulse. The memorial and museum are projected to open in 2022. The memorial will be free and open to the public year-round.

Joe Kleimanhttp://www.themedreality.com
Raised in San Diego on theme parks, zoos, and IMAX films, Joe Kleiman would expand his childhood loves into two decades as a projectionist and theater director within the giant screen industry. In addition to his work in commercial and museum operations, Joe has volunteered his time to animal husbandry at leading facilities in California and Texas and has played a leading management role for a number of performing arts companies. Joe has been News Editor and contributing author to InPark Magazine since 2011. HIs writing has also appeared in Sound & Communications, LF Examiner, Jim Hill Media, and MiceChat. His blog, ThemedReality.com takes an unconventional look at the attractions industry. Follow on twitter @themedreality Joe lives in Sacramento, California with his fiancé, two dogs, and a ghost.
Share
Facebook
Twitter
Linkedin
Email
Print
WhatsApp
Pinterest
ReddIt
Tumblr
Previous articleCLYMB Abu Dhabi sets November 29 opening date on Yas Island
Next article美智刻娱乐：故事铸魂，科技筑梦