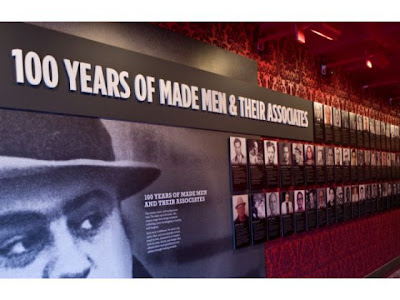 Las Vegas, NV, USA (February 22, 2012) — They say a picture is worth a thousand words. In the case of the new Las Vegas Mob Museum, that would equate to over 80,000 words. TEA member Color Reflections Las Vegas printed and mounted over 800 photographic prints for the 41,000- square- foot museum newly opened in Las Vegas, Nevada.

“Knowing how important the library of photographs are to the experience at the Mob Museum, our company was both excited and privileged to have the opportunity to bring the story of the Mob to life through our graphics,” said Joe Castellano, President Color Reflections Las Vegas. “Our staff put in over 2000 man-hours to color correct, print, mount, cut and paint the vast library of photographs that tell the rich history of the Mob, and visually introduce the visitor to those men and women who played a role in this historical organization.”

Color Reflections began in Las Vegas in August 1995. At that time they were a custom photo lab and digital imaging center. Over the years, they evolved into one of the premier fully Digital Large Format Printers on the West Coast, providing graphics to the gaming, trade show, retail and corporate clients. Color Reflections can produce everything from simple 8×10” prints to larger than life building wraps along with custom fabrication abilities.

Located in the former federal courthouse and United States Post Office, the Mob Museum is housed in a historic building. Completed in 1933 and listed on the Nevada and National Registers of Historic Places, it was one of the 14 courthouses in the nation to hold the Kefauver Committee hearings on organized crime. The 41,000-square-foot Mob Museum includes approximately 17,000 square feet of exhibition space on three floors in addition to a specialty retail store, special event areas, educational areas and office space.

Kim Patterson, project manager for the Mob Museum project had this to add, “Project’s of this size are not unusual for us, but it still surprises me when we use over one ton of mounting sub straights for any single project.”

Joe Kleimanhttp://wwww.themedreality.com
Raised in San Diego on theme parks, zoos, and IMAX films, InPark's Senior Correspondent Joe Kleiman would expand his childhood loves into two decades as a projectionist and theater director within the giant screen industry. In addition to his work in commercial and museum operations, Joe has volunteered his time to animal husbandry at leading facilities in California and Texas and has played a leading management role for a number of performing arts companies. Joe previously served as News Editor and has remained a contributing author to InPark Magazine since 2011. HIs writing has also appeared in Sound & Communications, LF Examiner, Jim Hill Media, The Planetarian, Behind the Thrills, and MiceChat His blog, ThemedReality.com takes an unconventional look at the attractions industry. Follow on twitter @ThemesRenewed Joe lives in Sacramento, California with his wife, dog, and a ghost.
Share
Facebook
Twitter
Linkedin
Email
Print
WhatsApp
Pinterest
ReddIt
Tumblr
Previous article
Casino Authority Authorizes $6 Million for Renovation and Expansion of Historic Atlantic City Steel Pier
Next article
Universal Studios Singapore’s Madagascar Ride Nominated for Best Attraction Award