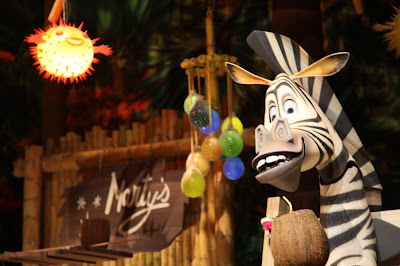 MADAGASCAR, the first attraction in the world based on the DreamWorks Animation (DWA) film franchise, is one of five attractions vying for the About.com 2012 Readers’ Choice Award, which honors the best new achievements for theme parks, amusement parks and water parks. Theme park fans can visit the About.com website and vote once per day between Feb. 22 and Mar. 21. Winners will be announced Friday, Mar. 30.

“This is award in many ways compares to the People’s Choice Award for the theme park industry, and it is indeed an honor to be nominated,” said Brent Young, creative director on the project and Chief Creative Officer for Super 78 Studios which produced the media for the ride in partnership with DWA. “Madagascar is in a bit of an under-dog position because it’s based in Singapore, but we’re hoping that fans of the DreamWorks franchise and the good people of Singapore will get out the vote.”

The nine-minute Madagascar indoor flume ride transports guests into the world of Alex the Lion, Marty the Zebra, Melman the Giraffe and Gloria the Hippo using a range of special effects including that immerse them convincingly into the story and the experience.

2012 marks the second year of the About.com Readers Choice Awards, which is the only program that focuses exclusively on theme park achievements in the past year.

Joe Kleimanhttp://wwww.themedreality.com
Raised in San Diego on theme parks, zoos, and IMAX films, InPark's Senior Correspondent Joe Kleiman would expand his childhood loves into two decades as a projectionist and theater director within the giant screen industry. In addition to his work in commercial and museum operations, Joe has volunteered his time to animal husbandry at leading facilities in California and Texas and has played a leading management role for a number of performing arts companies. Joe previously served as News Editor and has remained a contributing author to InPark Magazine since 2011. HIs writing has also appeared in Sound & Communications, LF Examiner, Jim Hill Media, The Planetarian, Behind the Thrills, and MiceChat His blog, ThemedReality.com takes an unconventional look at the attractions industry. Follow on twitter @ThemesRenewed Joe lives in Sacramento, California with his wife, dog, and a ghost.
Share
Facebook
Twitter
Linkedin
Email
Print
WhatsApp
Pinterest
ReddIt
Tumblr
Previous articleColor Reflections Provides Photographic Services to Las Vegas Mob Museum
Next articleTickets Now on Sale for Warner Bros. Studio Tour London and its Immersive Behind The Scenes Look at Harry Potter