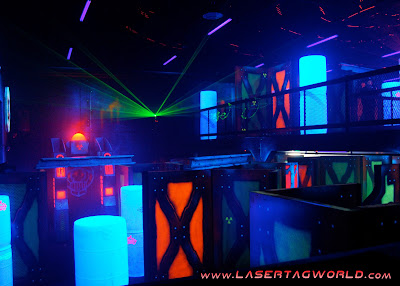 Indianapolis, IN, USA — Spare Time Entertainment Center in Lansing, Michigan closed its doors for a renovation and overhaul in early 2012. During this down time, the facility revamped the food menu, added new effects to the bowling alley, and installed an Urban-themed laser tag arena (www.LaserTagWorld.com) from Creative Works.


Michael MacColeman, the owner of Spare Time Entertainment, met with Jeff Schilling and his team at Creative Works several years ago during the IAAPA Amusement Expo. Since that time, he has kept in touch knowing that he would eventually want to renovate his facility and add laser tag as a new attraction. As Michael discovered from his research, laser tag is an added benefit for any entertainment venue due to its interactive game play, high throughput, and return on investment.


In January of 2012, Michael was finally able to pull the trigger and move forward with designing and building a custom laser tag arena for his space. Right from the get-go, he took advantage of the detailed project management from Creative Works. Michael really wanted a second level within the arena, but there was an immovable roof truss making it extremely difficult pull off. They coordinated with the contractor in order to design a structure that would work properly for the game and also meet code.


Once the site was ready, the Creative Works team arrived in Lansing to install the attraction. In just 4 days, the space was transformed from a non-descript “black box” into a fully themed laser tag arena with murals, props, and effects. Michael, along with the rest of his team, was very happy with the result. “Even though we haven’t opened quite yet, we’ve walked some people through the arena,” said Bill Assande from Spare Time. “With all of the lights and effects in there, it looks fantastic!”


To read more about this facility, visit www.sparetimelansing.com

Joe Kleimanhttp://wwww.themedreality.com
Raised in San Diego on theme parks, zoos, and IMAX films, InPark's Senior Correspondent Joe Kleiman would expand his childhood loves into two decades as a projectionist and theater director within the giant screen industry. In addition to his work in commercial and museum operations, Joe has volunteered his time to animal husbandry at leading facilities in California and Texas and has played a leading management role for a number of performing arts companies. Joe previously served as News Editor and has remained a contributing author to InPark Magazine since 2011. HIs writing has also appeared in Sound & Communications, LF Examiner, Jim Hill Media, The Planetarian, Behind the Thrills, and MiceChat His blog, ThemedReality.com takes an unconventional look at the attractions industry. Follow on twitter @ThemesRenewed Joe lives in Sacramento, California with his wife, dog, and a ghost.
Share
Facebook
Twitter
Linkedin
Email
Print
WhatsApp
Pinterest
ReddIt
Tumblr
Previous article
Fairmont Pacific Rim Allows Guests to Control Stay through iPad Technology
Next article
Electrosonic Completes A/V Integration on Renovated New York Historical Society Museum