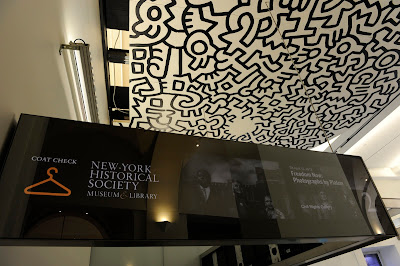 The New-York Historical Society Museum predates the founding of the Metropolitan Museum of Art by nearly 70 years. The Museum supports the New-York Historical Society, one of America’s preeminent cultural institutions, whose mission is to explore the richly layered political, cultural and social history of New York City, New York State and the nation, and to present history and art exhibitions and public programs that reveal the dynamism of history.

Platt Byard Dovell White Architects and Lee H. Skolnick Architecture + Design Partnership were the design team on the project. Included in the scope of the project was a sweeping new 3,400-square-foot space that combines museum admissions, the adjacent Robert H. and Clarice Smith New York Gallery for American History and Robert H. Smith Auditorium on the first floor, and the only children’s history museum and library in the city.

At the theater entrance and over the admissions desk are striking, sleek, semi-mirrored glass digital signage cases. Designed by Lee H. Skolnick Architecture & Design and built by DCL in Boston using Ad Notam glass, the signage provides visitors with information about the museum’s offerings and Historical Society activities. With the help of AV consultant TAD, Electrosonic supplied C-Nario signage software and players, which Unified Field used to craft the signage content.

Near the admissions desk is an interactive ‘living painting’ by Small Design Firm of Cambridge, MA. The living painting, based on Pulling Down the Statue of King George III, New York City (1852-1853) by Johannes A.S. Oertel from the museum’s collection, is displayed on a 2×5 landscape-oriented videowall made up of ten narrow-mullion Planar Matrix 55-inch monitors supplied and installed by Electrosonic. At first glance the painting on the videowall appears to be static. But behind the monitors, Dell computers run an application that makes the picture come alive.

Using a Microsoft Kinect camera, which tracks the movement of visitors, the computers launch a sequence of activities that change the content of the painting. Initially, visitors can hear the crackling and burning sound of the fire in the painting. When they approach the monitors, the dog in the foreground starts to move. As more visitors gather in front of the videowall and the longer they remain, captivated by what they see, the painting continues to come to life. The Revolutionary War colonists begin to tug on the ropes around the man-on-horseback statue in the midground, and sounds of their struggle increase. Finally, the statue crashes to the ground and smoke and ashes rise in the air. Then, miraculously, the painting returns to its original state.

In the Smith Gallery, which is capped by a remarkable ceiling by the late artist Keith Haring’s Pop Shop Studio, Small Design Firm created two interactive experiences relating to the historical artifacts on view. The New York Rising exhibit, which features a huge array of paintings and artifacts, uses five rotating display housings which contain portrait oriented 46-inch Samsung touchscreens installed by Electrosonic. When a visitor rotates one of the touchscreen cases, panning across a portion of the exhibit, the graphical images on the touchscreen pan with it, thereby highlighting the artifacts on the wall directly in line with the display. The visitor touches the image in the viewfinder to discover more information about the particular piece of artwork or artifact.

In addition, six pairs of 55-inch displays, mounted in portrait orientation, are mounted on the east and west building columns, showcasing treasures from the museum’s collection. Four Sony Vaio 22-inch touchscreens are on hand for further information gathering.

Adjacent to the Smith Gallery is the 420-seat Robert H. Smith Auditorium. This multi-purpose space, expanded with a mezzanine floor to greatly increase its capacity, hosts presentations in the form of a “distinguished speaker series” and other public programs and performances in the evenings, but during the day showcases an 18-minute multi-screen media experience titled “New York Story”. Produced by Donna Lawrence Productions and narrated by Liev Schreiber, “New York Story” traces the history of the city from its beginnings as a remote outpost to its current role as a world force.

In the auditorium, Electrosonic installed a three-projector blend system comprising Christie WU12K-M projectors fed by Extron JMP 9600-2K JPEG2000 video players controlled by a Medialon show control system. “New York Story” imagery begins at the front of the stage on four 6-foot wide screens, which roll up and down and widen to a total of ten as the tale unfolds. Images are also shown on gray drapes, set just behind the white roller screens. Midway through the show, some of the movable screens lift up to reveal the center portion of a 72-foot wide backscreen bearing a single image. During the last five minutes of the experience, the entire 72-foot span is revealed. The stage machinery for the display surfaces was provided by PDO and LA Propoint. Electrosonic designed the projection system to cover the three screen planes, which are sometimes used simultaneously. To ensure that it was feasible, Electrosonic and Donna Lawrence Productions did full size tests at Electrosonic’s Burbank facility one year prior to installation.

To maximize usability of the theater, an AMX-controlled full presentation system allows for everything from a complete band set up to a simple PowerPoint presentation. It features a Panasonic projector, connections for up to 18 microphones, Blu-ray and DVD players and podium control for the PowerPoint computer. The presentation system only shares speakers and the screen with the show. The theater’s mezzanine houses a touchscreen control position for Medialon and AMX, and features a Yamaha LS9-32 sound mixing board.

Outside the theater, Electrosonic equipped the Smith Gallery and Dexter Hall with fixed speakers and portable special events audio and video systems that allow presentation in either gallery with either local or theater generated audio and video. The portable part of the system can be used as a stand-alone setup anywhere in the building.

Downstairs at the New-York Historical Society, kids get their own taste of the past – even its dark side – at the DiMenna Children’s History Museum, the first ever museum devoted to children’s history. One exhibit introduces kids to Newsies, the newsboys who eked out a living selling papers on the street, while another tells the tale of the Orphan Trains used to ship destitute children out west to work on farms.

Electrosonic’s design consulting team provided design services for the auditorium as well as portions of the Great Hall and Dexter Hall. The team worked closely with Donna Lawrence Productions on the auditorium’s schematic and design development, creating two different full-scale mock ups of a section of the theater to test the design against the unique demands of the multi-screen projection.

The design consulting team also devised an innovative solution for the auditorium’s sound system. Since the main screen had limited space behind it for speakers, and placing speakers behind the main screen could not be used once the 2-foot wide screens were deployed, they opted to hide speakers in the apron and ceiling of the stage to give the audience the illusion that sound is coming from the center of the screen. The design consulting team continued its audio role post-installation, supporting Donna Lawrence Productions with the final audio mix on site.

Joe Kleimanhttp://wwww.themedreality.com
Raised in San Diego on theme parks, zoos, and IMAX films, InPark's Senior Correspondent Joe Kleiman would expand his childhood loves into two decades as a projectionist and theater director within the giant screen industry. In addition to his work in commercial and museum operations, Joe has volunteered his time to animal husbandry at leading facilities in California and Texas and has played a leading management role for a number of performing arts companies. Joe previously served as News Editor and has remained a contributing author to InPark Magazine since 2011. HIs writing has also appeared in Sound & Communications, LF Examiner, Jim Hill Media, The Planetarian, Behind the Thrills, and MiceChat His blog, ThemedReality.com takes an unconventional look at the attractions industry. Follow on twitter @ThemesRenewed Joe lives in Sacramento, California with his wife, dog, and a ghost.
Share
Facebook
Twitter
Linkedin
Email
Print
WhatsApp
Pinterest
ReddIt
Tumblr
Previous articleCreative Works Creates Dual Level Laser Tag Arena at Indianapolis FEC
Next articleSuper 78 Studios Now Offering Attraction Concept and Development