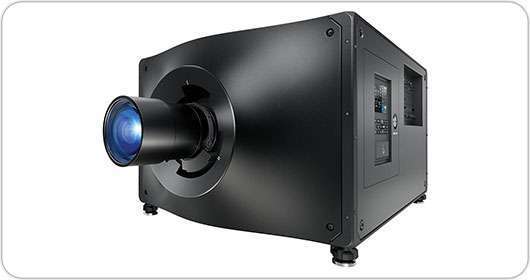 Building on the success of the well received Laser CineDome platform, D3D Cinema and Christie are pleased to announce the next generation upgrade – Gen2 – featuring Christie’s new D4K40-RGB pure laser projectors (pictured above).  The Laser CineDome solution premiered in late 2016 as a premium giant dome projection platform, designed to replace film-based 70mm theater systems in museums and science centers.  The Gen2 option will be available in Q2 2019 and will be offered to giant dome theaters at a price point lower than the Gen1 version.

The Gen2 evolution of Laser CineDome boasts a vastly expanded contrast ratio producing greater than 90% of the REC 2020 color space for even richer colors and stunningly lifelike visuals.  Coupled with CineDome’s industry-leading high frame rate capabilities up to 120 frames per second, 6K resolution, and enhanced playback functionality, the Gen2 Laser CineDome package will deliver the most dazzling and immersive cinema experience on the market, a critical stipulation for D3D’s clients in the institutional museum cinema space.

“As a former institutional giant dome theater director, I’ve been most impressed by the stellar focus uniformity, brightness uniformity, and resolution produced by our three-projector 6K solution,” said Art Mercurio, Vice President of Technology for D3D Cinema. “Frankly, it produces a noticeably better image when compared to the muddy edges, hot spots and pixelated screen-door effect inherent to a single-projector/single-lens solution, which we tested extensively throughout our own R&D.  With the significant leap in contrast of this Gen2 system, Laser CineDome now checks every box for ‘highest quality’ on the market.”

“We realize that many dome operators and executives are making upgrade decisions this year, for integrations in 2019 and 2020,” said Derek Threinen, VP of CineDome Business Development at D3D Cinema.  “So, the timing for this rollout is critical.  D3D’s mission, as always, is to reinvigorate the museum/giant screen cinema business by coupling the best image quality with a more prosperous business model, open platform programming versatility, and an upgrade path to emerging technologies.  CineDome is already the premium solution for museum dome clients – a system designed by giant cinema dome operators for giant cinema dome operators – but our technology is built to evolve.  The evolution to Gen2 raises the quality bar again…and this new bar will be hard to dethrone.”