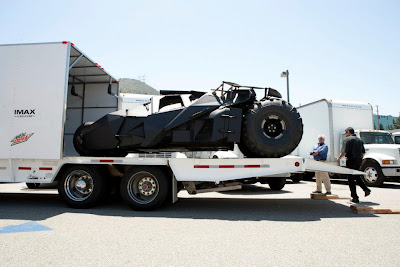 Burbank, CA, USA /BUSINESS WIRE/ — Fans who have been eagerly awaiting the July 20 release of Warner Bros. Pictures’ and Legendary Pictures’ “The Dark Knight Rises” will have an opportunity to get a firsthand look at the Tumbler and the Bat-Pod, which are rolling out on a coast-to-coast tour, sponsored by Mountain Dew and IMAX®.

Both the Tumbler and the Bat-Pod have served as high-powered modes of transportation for Batman in Christopher Nolan’s earlier blockbusters—with the Tumbler first appearing in “Batman Begins,” and the Bat-Pod being introduced in “The Dark Knight.” They will both be featured in different ways in the hugely anticipated finale to the director’s Batman trilogy, “The Dark Knight Rises.”

*Please note that dates and locations are subject to change, and more may be added.

More information on the tour can be found at:

Opening in theatres and IMAX digital and 15/70 film theaters on July 20, 2012, “The Dark Knight Rises” will be distributed worldwide by Warner Bros. Pictures, a Warner Bros. Entertainment Company. The film has been rated PG-13 for intense sequences of violence and action, some sensuality and language.  Approximately 60 minutes of the movie was filmed with IMAX 15perf/70mm cameras.

Joe Kleimanhttp://wwww.themedreality.com
Raised in San Diego on theme parks, zoos, and IMAX films, Joe Kleiman would expand his childhood loves into two decades as a projectionist and theater director within the giant screen industry. In addition to his work in commercial and museum operations, Joe has volunteered his time to animal husbandry at leading facilities in California and Texas and has played a leading management role for a number of performing arts companies. Joe has been News Editor and contributing author to InPark Magazine since 2011. HIs writing has also appeared in Sound & Communications, LF Examiner, Jim Hill Media, and MiceChat. His blog, ThemedReality.com takes an unconventional look at the attractions industry. Follow on twitter @ThemesRenewed Joe lives in Sacramento, California with his fiancé, two dogs, and a ghost.
Share
Facebook
Twitter
Linkedin
Email
Print
WhatsApp
Pinterest
ReddIt
Tumblr
Previous articleUK’s Largest Man-Made Wildflower Meadows Prepped for Olympic Park
Next articlePower Efficiency Corporation Helps Ocean Park Conserve Energy on Extensive Escalator Network