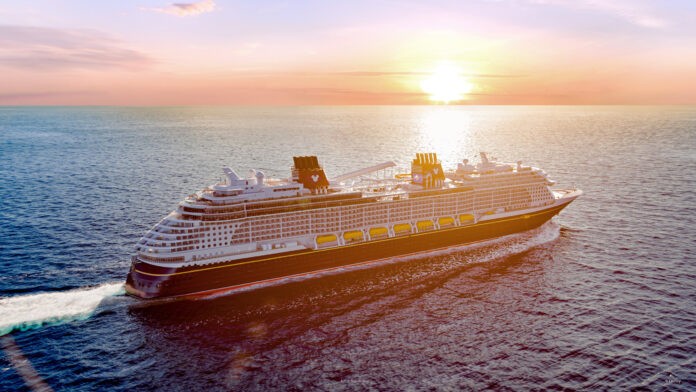 During a virtual media preview event representatives from Disney Cruise Lines and Walt Disney Imagineering showcased many of the new features expected on the company’s fifth ship, Disney Wish. The ship’s maiden voyage is scheduled for June 9,2022 from Port Canaveral, Florida to the Bahamas. Bookings are available starting May 27, 2021.

The ship’s Grand Hall serves as the central atrium and meeting area, where a Cinderella statue greets guests as they arrive. In a first for Disney, the Grand Hall Stage will provide various theatrical surprises throughout the day.

The major new addition to the ship is a water coaster called AquaMouse. The attraction builds on the clear acrylic waterslide (AquaDuck) found on other Disney vessels. Rafts of guests will be propelled through immersive tunnels that include special effects, lighting, sound and projected images. The 760 foot-long waterslide provides a two-minute ride experience. The ride is themed to a new Mickey and Minnie short called “Scuba Scramble,” taking guests on an adventure to Mermaid Lagoon.

The water play areas of the ship will also be enhanced with a new Toy Story Splash Zone for younger kids.

The ship’s activity club for kids will feature a unique secret entrance available only to children, accessible through the Grand Hall. The entrance allows kids to slide right into the middle of the Oceaneer Club.

Inside the club kids can visit the Marvel Superhero Academy where they will train alongside superheroes like Black Panther, Ant Man, The Wasp and SpiderMan. In the Walt Disney Imagineering Lab, kids can learn about the designers who create Disney experiences. They will be able to design their own coaster and then virtually ride it.

Shows will take place in the Walt Disney Theater, inspired by a magical forest motif. Disney’s Aladdin stage show is being reimagined for the ship and two additional new shows are in development.

Dining on Disney Wish will look a bit different from its sister ships. Star Wars fans will enjoy the Hyperspace Lounge. Panoramic views from all over the Star Wars galaxy will be complemented by inter-galactic cocktails.

Adult dining is themed around Beauty and the Beast, including The Rose Lounge, Palo Steakhouse and the Lumiere-inspired restaurant Enchante.

The ship will feature three new restaurants that guests will rotate through.

Arendelle provides a Frozen dining adventure. Designed as a sort of theater-in-the-round diners are invited to celebrate the engagement of Anna and Kristoff, with appearances from all the Frozen characters. Food will have a Nordic influence.

1923 is themed to the golden age of Hollywood, and aptly titled to reflect the year Walt Disney Studios first opened its doors. Classic and elegant, the food will feature California-inspired flavors.

Worlds of Marvel is an “interactive dinner mission.” Disney is referring to the restaurant as a “cinematic dining adventure” though more details will be announced later.

Disney Wish’s staterooms are receiving a storybook-themed makeover. 1,254 staterooms, many with ocean views, are found on the ship. New for this ship are a series of suites perched above the ship’s bridge and several concierge level two-story suites.