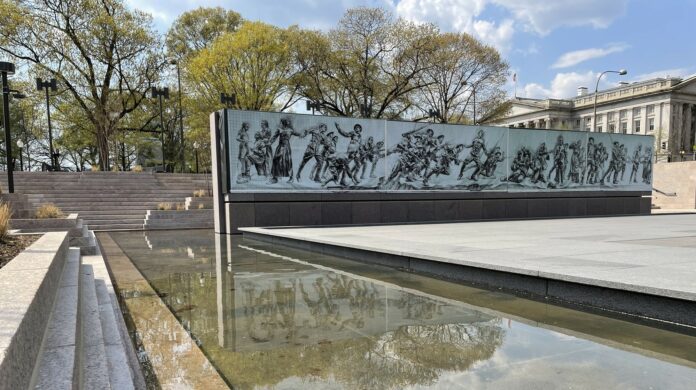 The American flag was raised over the World War I Memorial for the first time on Friday, April 16, the formal unveiling of the memorial that honors the 4.7 million Americans who served their nation in World War I, including 116,516 who made the supreme sacrifice. The First Colors Ceremony featured recorded remarks by President Joe Biden and Secretary of the Interior Deb Haaland. A full recording of the event is available online. The National Park Service welcomes visitors to the World War I Memorial, which is now open to the public.

“The National Park Service is proud to be a part of the raising of the American flag over the memorial that honors the Americans who served this country during World War I,” NPS Deputy Director Shawn Benge said. “This memorial joins a nationally significant group of parks, monuments and memorials that commemorate and tell the stories of the American experience, and I encourage everyone to join me in honoring the service and sacrifice of the  heroes who served their country in the First World War.”

Built by the United States World War I Centennial Commission and designed by architect Joseph Weishaar, the new memorial features a statue of Gen. John J. Pershing, commander of the American Expeditionary Forces during the war; the Peace Fountain, a cascade of water behind an excerpt from the poem “The Young Dead Soldiers Do Not Speak” by Archibald MacLeish; engraved quotes and references to theaters, campaigns and battles in which American forces participated; and exhibits about the role of the United States in World War I.

The memorial’s central feature, a sculpture titled “A Soldier’s Journey,” is scheduled for installation in 2024. The 58-foot-long bas-relief sculpture by Sabin Howard will feature 38 figures depicting the journey of a recurring American soldier and representing the larger American experience of World War I.

The memorial is located at the former Pershing Park, 1.76-acres along Pennsylvania Avenue NW between 14th Street NW and 15th Street NW, across from the White House Visitor Center. The World War I Memorial builds on the original design of Pershing Park, dedicated at the site in 1981 as the American Expeditionary Forces Memorial.

“The time is long overdue for the World War I Memorial to take its rightful place among the memorials of the nation’s capital that pay tribute to the men and women who served and sacrificed in America’s armed conflicts,” Jeff Reinbold, superintendent of National Mall and Memorial Parks said. “The National Park Service is honored to serve as a keeper of America’s stories, and to care for this incredible memorial at which we honor those who served both “Over There” and on the home front in World War I.”

The World War I Memorial  is open to the public 24 hours a day, seven days a week. National Park Service rangers provide programs for visitors and answer questions.