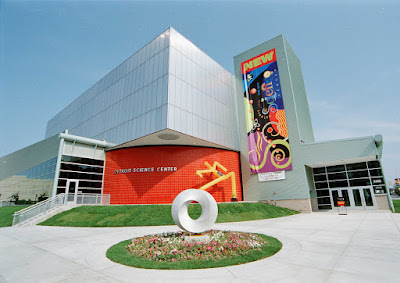 Detroit, MI, USA (September 11, 2012) — Following the sudden closure of the Detroit Science Center a year ago (on Sept 26, 2011) due to “financial hardship,” things took a turn for the worse. Citizens Bank of Flint, its largest creditor, requested the Science Center liquidate its assets to pay off an outstanding debt of $6.2 million.
With a July 5, 2012 public auction looming for the liquidation, Ambassador Ronald Weiser, a former Chair of the Michigan Republican Party and Trustee of the Henry Ford museum in nearby Flint, arranged with Citizens to purchase the museum’s land, building, assets, and outstanding debt at a reduced cost.  As part of his plan, he helped form a new nonprofit entity called “Michigan Science Center,” a completely different organization than the one operating Detroit Science Center at the time of its closure. Ambassador Weiser’s wife Eileen, who was instrumental in the design and implementation of his strategy, sits on the Michigan Science Center board.
For Weiser’s plan to succeed, Michigan Science Center will not be able to incur debt.  All funding will either come from donations or from sales.  To date, the nonprofit has commitments of more than $2.5 million, including $1 million from the General Motors Foundation.  Once the existing debt has been paid off to Weiser, the property and contents will be sold to the new foundation at a discounted cost.

Board members are meeting this week to determine a possible opening date, predicted to be this fall.  As an indication that things are progressing, Detroit Science Center’s facebook page was recently changed to reflect the museum’s new name and a new website is currently under construction.

One other area museum, the Detroit Children’s Museum, was operated under contract by the Detroit Science Center and closed shortly after the Science Center due to the larger institution’s financial issues. Operation of the Children’s Museum has reverted to its owner, Detroit Public Schools, and it is open on a limited basis to public school children from within the district during the school day.  Detroit Public Schools is considering opening the Children’s Museum to other schools and the public should federal or state funding be made available to supplement operating costs.  At this time, there is no word on the new Science Center entering into a operational contract with the school district.

Joe Kleimanhttp://wwww.themedreality.com
Raised in San Diego on theme parks, zoos, and IMAX films, InPark's Senior Correspondent Joe Kleiman would expand his childhood loves into two decades as a projectionist and theater director within the giant screen industry. In addition to his work in commercial and museum operations, Joe has volunteered his time to animal husbandry at leading facilities in California and Texas and has played a leading management role for a number of performing arts companies. Joe previously served as News Editor and has remained a contributing author to InPark Magazine since 2011. HIs writing has also appeared in Sound & Communications, LF Examiner, Jim Hill Media, The Planetarian, Behind the Thrills, and MiceChat His blog, ThemedReality.com takes an unconventional look at the attractions industry. Follow on twitter @ThemesRenewed Joe lives in Sacramento, California with his wife, dog, and a ghost.
Share
Facebook
Twitter
Linkedin
Email
Print
WhatsApp
Pinterest
ReddIt
Tumblr
Previous articleSarah Joyce New Vice President for Europe, Middle East and Africa at Electrosonic
Next articleState of Kentucky Issues RFP For Former Kentucky Kingdom Theme Park