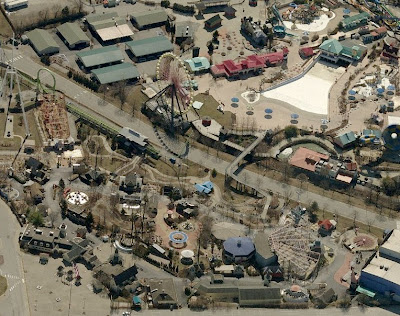 Louisville, KY, USA (September 11, 2012) — On Monday, September 10, the Commonwealth of Kentucky’s Finance and Administration Cabinet issued solicitation #RFB 758 1300000095, also known as “RFP for Operation of the Amusement Park on the Grounds of the Kentucky Fair Board.”  The deadline for proposals is October 19, 2012.

The property at the center of the proposal is the former Kentucky Kingdom theme park, which, during its most recent period of operation, was managed by Six Flags Corporation.  During the past year, proposals to reopen the park have been made by both the Koch party, owners of Holiday World, and a group led by former Kentucky Kingdom operator Ed Hart.  The Koch family terminated their proposal after evaluating the current state of the property and determining that a successful reopening could not be done in a timely manner.

The Kentucky Kingdom Redevelopment Corporation, Hart’s group, delivered a proposal prior to the issuance of the RFP.  Based on the criteria listed in the RFP, it is likely that Hart’s group will need to submit a newly devised proposal.  Most notable in the RFP are four items listed as “Dealbreakers-Prohibitions.”  As stated in the RFP: “If a proposal includes one of the provisions listed in the ‘Dealbreakers’ section, then said proposal shall be deemed non-responsive/non-responsible and will NOT be evaluated by the Commonwealth.” One of these dealbreakers is “Any provision in any instrument that causes the Commonwealth to be immediately responsible to cure a default on behalf of the Respondent/Tenant.” The plan Hart’s group submitted prior to the RFP listed a cost of $40 million, with $30 of that to be a loan or loans with banks, with the state issuing the park as collateral. This stipulation in the RFP potentially invalidates Hart’s existing proposal.

Some key points in the RFP are:

Bidders will have the opportunity to tour the site on October 18.  After the bidding process ends on October 19, the proposals will be reviewed by an evaluation team selected by the Finance and Administration Cabinet.  The three finalists will then be able to enter into a “competitive negotiation process” with the state.  The RFP does not indicate a desired date for the park’s reopening nor what attractions should be kept or removed, but rather places those responsibilities on the bidders as part of the proposal process.

Joe Kleimanhttp://wwww.themedreality.com
Raised in San Diego on theme parks, zoos, and IMAX films, Joe Kleiman would expand his childhood loves into two decades as a projectionist and theater director within the giant screen industry. In addition to his work in commercial and museum operations, Joe has volunteered his time to animal husbandry at leading facilities in California and Texas and has played a leading management role for a number of performing arts companies. Joe has been News Editor and contributing author to InPark Magazine since 2011. HIs writing has also appeared in Sound & Communications, LF Examiner, Jim Hill Media, and MiceChat. His blog, ThemedReality.com takes an unconventional look at the attractions industry. Follow on twitter @ThemesRenewed Joe lives in Sacramento, California with his fiancé, two dogs, and a ghost.
Share
Facebook
Twitter
Linkedin
Email
Print
WhatsApp
Pinterest
ReddIt
Tumblr
Previous articleDetroit’s Science Center Has New Name and New Operator; Hopes for Fall Reopening
Next articleLarge Format Veteran Paul Giguere Joins Global Immersion’s Giant Screen Product Team