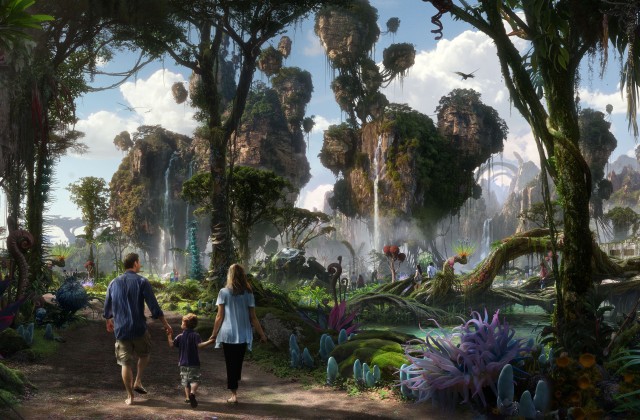 The Walt Disney Company today announced both Q1 2017 earnings and the opening date of its newest themed land.

Pandora – The World of Avatar will open at Disney’s Animal Kingdom on Saturday, May 27, it was announced today by Disney CEO Bob Iger during The Walt Disney Company Shareholders meeting.

Inspired by Academy-award winning filmmaker James Cameron’s box-office hit, “AVATAR,” the new 12-acre land will immerse guests in the lush world of Pandora about a generation after the film’s human-Na’vi conflict.

Riding a magnificent Mountain Banshee, guests will soar across Pandora on Avatar Flight of Passage. This high-tech adventure will offer a thrilling flight through the jungles and floating mountains, and over the majestic oceans of this colorful world. On the family-friendly Na’vi River Journey guests will sail down a sacred river hidden within a glowing rainforest. The expedition will end in an unforgettable encounter with a Na’vi Shaman, a figure who has a deep connection to the life force of Pandora.

Guests will also be able to dine at Satu’li Canteen, grab a drink at Pongu Pongu or shop for Na’vi cultural items, toys, science kits, and more at Windtraders.

The expansion completes the transformation of Disney’s Animal Kingdom from a day into nighttime theme park with captivating offerings and extended entertainment.

Pandora – The World of Avatar is a creative collaboration by Walt Disney Imagineering, Cameron and Lightstorm Entertainment to bring to life the mythical world of Pandora.

The company also announced that Parks and Resorts revenues for the first quarter increased 6% to $4.6 billion and segment operating income increased 13% to $1.1 billion. Operating income growth for the quarter was due to increases at its domestic and international operations. The growth in the quarter was unfavorably impacted by Hurricane Matthew at its domestic operations and a shift in the timing of the New Year’s holiday relative to our fiscal periods.

The increase in operating income at Disney’s domestic operations was primarily due to growth at its parks and resorts and cruise line. Higher operating income at its parks and resorts was driven by guest spending growth, partially offset by lower attendance and occupied room nights. The increase in guest spending was due to higher average ticket prices, food and beverage spending and average hotel room rates. Attendance reflected the prior-year benefit of the 60th Anniversary celebration at Disneyland Resort, the impact in the current quarter from Hurricane Matthew at Walt Disney World Resort and the impact of the New Year’s holiday shift. Costs at Disney’s parks and resorts were flat, as labor and other cost inflation and costs for new guest experiences were essentially offset by cost efficiency initiatives. At its cruise line, growth was due to higher average ticket prices and lower dry-dock expenses. A portion of the dry-dock costs for the Disney Wonder were incurred in the current quarter whereas all of the dry-dock costs for the Disney Dream were incurred in the prior-year first quarter.

Joe Kleimanhttp://wwww.themedreality.com
Raised in San Diego on theme parks, zoos, and IMAX films, Joe Kleiman would expand his childhood loves into two decades as a projectionist and theater director within the giant screen industry. In addition to his work in commercial and museum operations, Joe has volunteered his time to animal husbandry at leading facilities in California and Texas and has played a leading management role for a number of performing arts companies. Joe has been News Editor and contributing author to InPark Magazine since 2011. HIs writing has also appeared in Sound & Communications, LF Examiner, Jim Hill Media, and MiceChat. His blog, ThemedReality.com takes an unconventional look at the attractions industry. Follow on twitter @ThemesRenewed Joe lives in Sacramento, California with his fiancé, two dogs, and a ghost.
Share
Facebook
Twitter
Linkedin
Email
Print
WhatsApp
Pinterest
ReddIt
Tumblr
Previous articleVillage Roadshow Opens Off-road Driving Attraction at Wet ‘n’ Wild Gold Coast
Next articleExplore Real Life Denizens of the Deep on LEGOLAND Dubai’s New Submarine Adventure