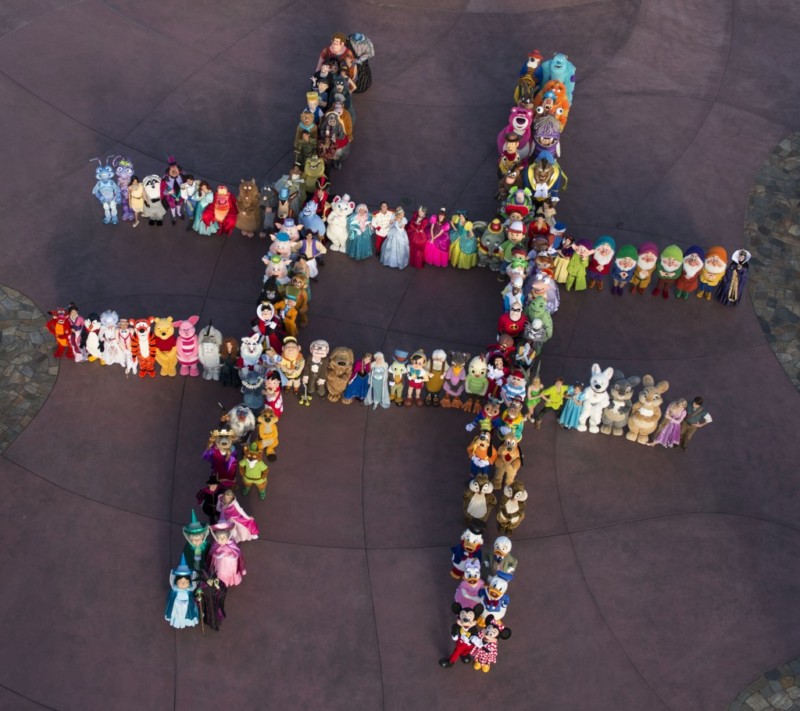 Anaheim, CA and Lake Buena Vista, FL, USA — 140 Disney characters gathered at Walt Disney World Resort to create the Ultimate Tweet to announce the latest Disney Parks bi-coastal, all-night extravaganza; and guests are invited to show their “Disney Side” by dressing as their favorite Disney hero or villain.

Mickey, Minnie, Donald, Goofy, Pluto and 135 of their friends came together to trumpet the countdown to “Rock Your Disney Side: 24-Hours” this Memorial Day Weekend, the traditional start of the family travel season, when guests of Walt Disney World Resort in Florida and Disneyland Resort in California can enjoy select parks for 24 hours nonstop.

The Magic Kingdom Park in Florida and Disneyland Park and Disney California Adventure Park in California will be filled with great Disney heroes and villains from 6 a.m., May 23 to 6 a.m., May 24, 2014, local time marking the beginning of a summer of fun at Disney Parks. The celebration on both coasts will feature a cavalcade of events showcasing the good-vs.-evil of classic Disney stories including character meet-and-greets throughout the parks, special entertainment, event merchandise, and food and beverage offerings. Along with the entertainment guests have grown to love every day, they’ll discover surprise additions and special events throughout the 24 hours.

Mickey and pals announced the 24-hour party in their own inimitable style – with a 140-character-strong “Mega Tweet,” sending a #DisneySide message to all their fans on social media to come see them on May 23.

“Rock Your Disney Side” All Summer

Fans will be able to “rock” their Disney Side throughout the summer on both coasts. Guests will find new excitement at the Walt Disney World resort including the completion of New Fantasyland – the largest expansion in Magic Kingdom history – with the new Seven Dwarfs Mine Train family rollercoaster attraction (Opening date to be announced). Other summer festivities include the New-Fantasyland-inspired Disney Festival of Fantasy Parade and the rollout of MyMagic+, taking the Disney guest experience to the next level. Recent additions to Disneyland Resort include the stage show, “Mickey and the Magical Map,” featuring characters, music and fun surprises in the Fantasyland Theatre, and Fantasy Faire, a regal setting for encounters with some favorite Disney princesses.

Disney Side of Summer Sweepstakes

Guests also can tweet how they plan to “Rock” their Disney Side this summer along with #DisneySideSweepsEntry for a chance to win a coast-to-coast 7-day / 6-night Disney Parks vacation for 4 and attend the Rock Your Disney Side 24-Hour event!  One winner and three guests can enjoy a back-to-back stay at the Walt Disney World Resort in Florida followed by Disneyland Resort in California to join us for the “Rock Your Disney Side: 24-Hours.”

For more information on other ways to Show Your Disney Side, check out www.RockYourDisneySide.com

Joe Kleimanhttp://wwww.themedreality.com
Raised in San Diego on theme parks, zoos, and IMAX films, InPark's Senior Correspondent Joe Kleiman would expand his childhood loves into two decades as a projectionist and theater director within the giant screen industry. In addition to his work in commercial and museum operations, Joe has volunteered his time to animal husbandry at leading facilities in California and Texas and has played a leading management role for a number of performing arts companies. Joe previously served as News Editor and has remained a contributing author to InPark Magazine since 2011. HIs writing has also appeared in Sound & Communications, LF Examiner, Jim Hill Media, The Planetarian, Behind the Thrills, and MiceChat His blog, ThemedReality.com takes an unconventional look at the attractions industry. Follow on twitter @ThemesRenewed Joe lives in Sacramento, California with his wife, dog, and a ghost.
Share
Facebook
Twitter
Linkedin
Email
Print
WhatsApp
Pinterest
ReddIt
Tumblr
Previous article
Full House for Fulldome: Record registration for IMERSA Summit signals high interest in immersive dome experiences
Next article
Pepsi Signs Pact to be Official Beverage Supplier at Shanghai Disney Resort