Dollywood Launches Into 2016 With First of its Kind Wooden Coaster 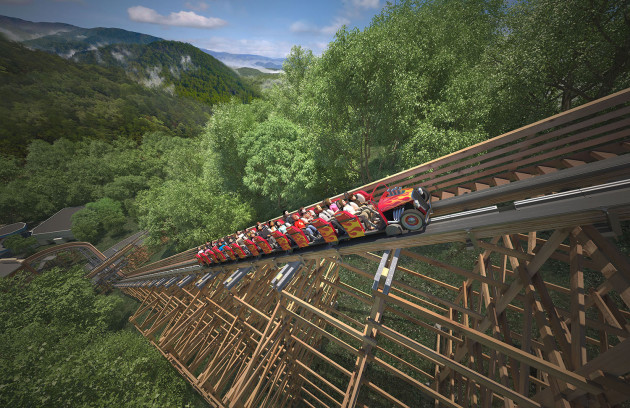 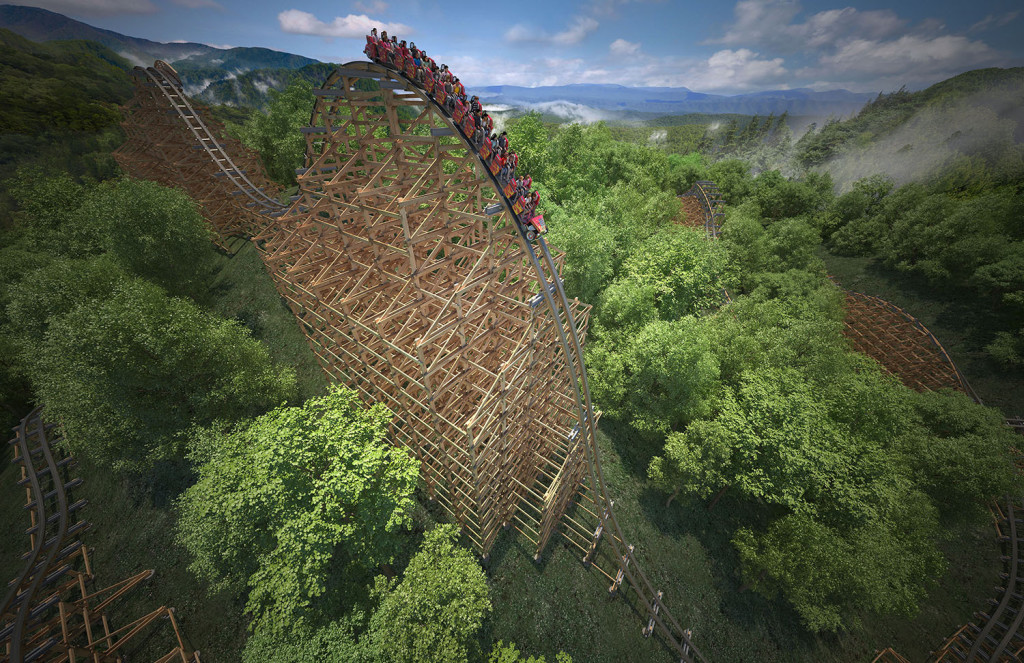 Themed after a tricked out 1950s-era hot rod, Lightning Rod launches riders from zero to 45 mph more than 20 stories up its lift hill to one of the ride’s first airtime moments. At the crest of the hill, riders face twin summit airtime hills before tackling the daring first drop. Lightning Rod races down the 165-foot drop and propels guests along its 3,800-ft. track to a top speed of 73 mph, the fastest speed for a wood coaster in the world.

“Lightning Rod reminds me so much of those colorful cars cruisin’ up and down Main Street in downtown Sevierville back when I was in high school. I remember all those souped up cars; but what I remember most were those good lookin’ boys behind the wheel with those flat top and ducktail haircuts,” Dolly Parton said with a laugh. 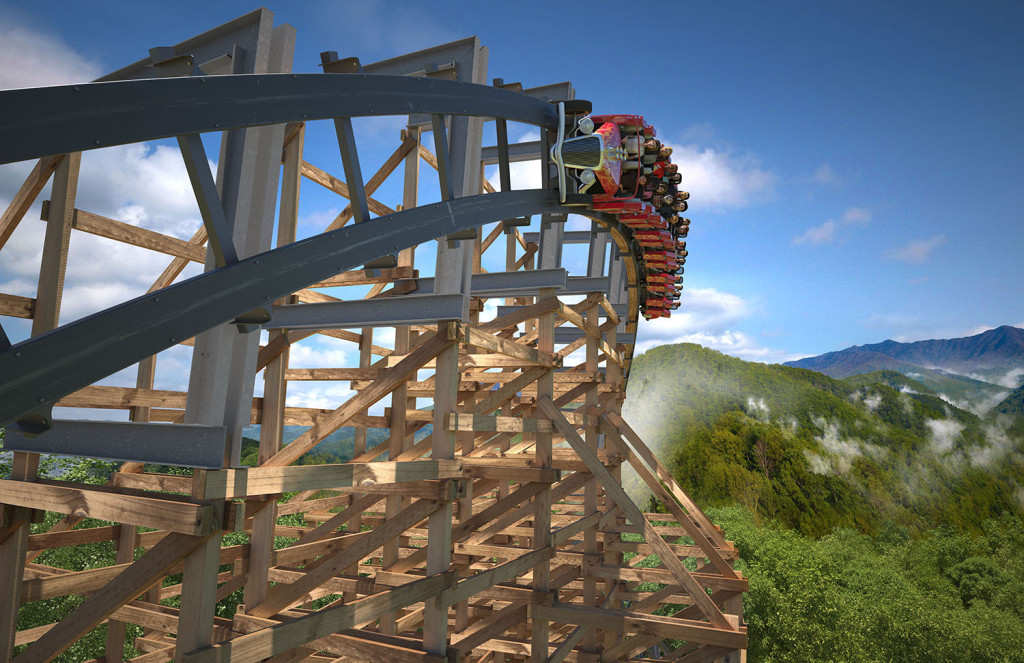 “I’m truly excited about this ride because it will let our guests experience something just as fast as those hot rods I remember,” she continued. “Even better, it’s the fastest wooden roller coaster in the world, so I think we’re going to see a lot of people coming from all over to peel out on the Lightning Rod.”

Located in Dollywood’s Jukebox Junction, Lightning Rod rockets riders around its massive wooden structure on an adrenaline-charged lap through the trees in the hills and valleys surrounding Dollywood. During the ride, guests experience nearly 20 seconds of airtime. The coaster train is comprised of 12 cars, carrying two passengers each, for a total of 24 people per train.

Dollywood’s development team has tapped Rocky Mountain Construction (RMC) as the ride manufacturer. RMC is no stranger to out-of-the-box coaster projects, having designed a number of innovative attractions around the world. Lightning Rod employs several unique features including the lift hill launch, twin summit airtime hills, a 90+ degree banked breaking wave turn, a 90+ degree outside banked turn, and a non-inverting half loop.

Lightning Rod puts riders in the driver’s seat of Johnny Rev’s newest hot rod. After months of tinkering, Johnny invites Dollywood guests to step behind the wheel for the first test drive of his flashy new creation. Like any proper hot rod, massive header pipes and an imposing injector scoop peer out from the train’s flamed bodywork. 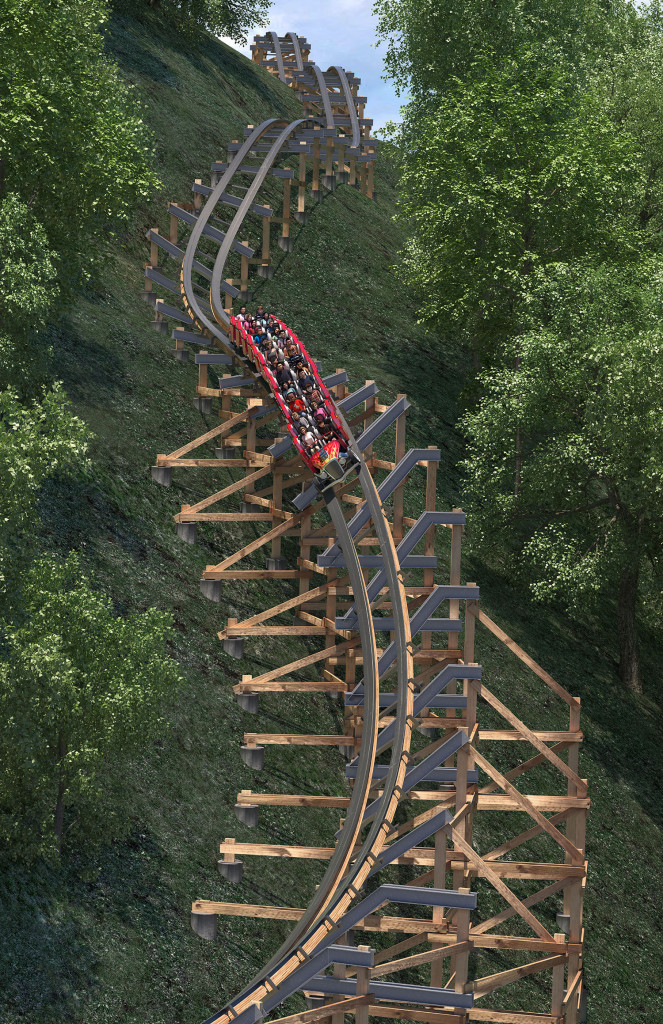 Lightning Rod is the newest member of The Dollywood Company’s collection of award-winning attractions. In March 2012, Dollywood opened the $20 million Wild Eagle, the country’s first wing coaster. The company introduced RiverRush, Tennessee’s first and only water coaster, at Dollywood’s Splash Country in 2013. FireChaser Express, the nation’s first dual-launch family coaster, was added at Dollywood in 2014. Dollywood mainstays Thunderhead, consistently among the world’s top five wood coasters, Mystery Mine, Blazing Fury and Tennessee Tornado round out the park’s list of innovative coasters.

Joe Kleimanhttp://wwww.themedreality.com
Raised in San Diego on theme parks, zoos, and IMAX films, InPark's Senior Correspondent Joe Kleiman would expand his childhood loves into two decades as a projectionist and theater director within the giant screen industry. In addition to his work in commercial and museum operations, Joe has volunteered his time to animal husbandry at leading facilities in California and Texas and has played a leading management role for a number of performing arts companies. Joe previously served as News Editor and has remained a contributing author to InPark Magazine since 2011. HIs writing has also appeared in Sound & Communications, LF Examiner, Jim Hill Media, The Planetarian, Behind the Thrills, and MiceChat His blog, ThemedReality.com takes an unconventional look at the attractions industry. Follow on twitter @ThemesRenewed Joe lives in Sacramento, California with his wife, dog, and a ghost.
Share
Facebook
Twitter
Linkedin
Email
Print
WhatsApp
Pinterest
ReddIt
Tumblr
Previous articleElectrosonic Brings the Human Body to Life at Turkey’s Konya Science Center
Next articleETI and Panasonic Introduce Displays with Videro Software Pre-installed