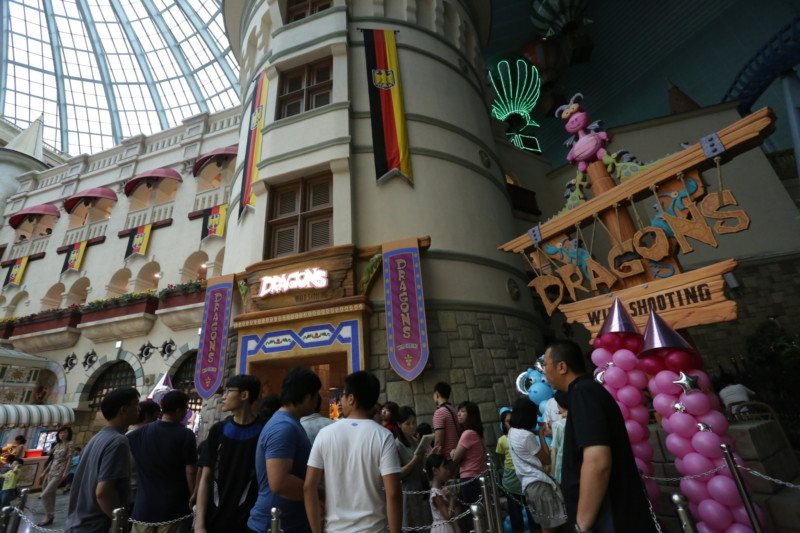 Dragons Wild Shooting is an interactive multi-media dark ride set in a storybook medieval kingdom.  Dragons have overrun the castle and everyone has fled, except for one – the royal court’s hapless jester, Jingles.  Jingles enlists guests’ help in utilizing state-issued “civil defense wands” to drive the Dragons from the castle.  Boarding enchanted battle wagons, guests see the kingdom overwhelmed by a swarm of fire-breathing Dragons.  But upon entering the castle, guests discover that these “fearsome” creatures are actually just party animals… and really bad houseguests.  They’ve guzzled all the ale, eaten all the food, and they’re getting into all manner of hilarious mischief.

Guests travel through the castle – through the great hall, the portrait gallery, the grand staircase, the kitchen, the royal banquet hall, the armory and more – magically zapping the hilarious horde of Dragons.  In the ride’s climax, guests face off with the Great Dragon, a monstrous creature who has an allergic reaction to the magic wand zaps – like scarfing down bad shrimp at the all-you-can-eat buffet.  If guests score enough hits during the final battle, the Great Dragon swells to bursting, cartoonishly exploding into a swarm of Baby Dragons.  The victorious guests are crowned heroes of the kingdom, and see their portrait hung in the castle’s throne room.

“Dragons Wild Shooting” takes guests on a journey through a mid-century children’s book-styled world, with pop-up book environments and a massive cast of whimsical Dragons.  The ride’s interactive gameplay integrates animatronic figures with animated media and a host of special effects.  For instance, when guests zap the Cannonball Dragons flying through the armory, they are percussed by blasts of air synchronized to the on-screen media.  And when the fire-belching Great Dragon bursts up through the floor of the powder room for the ride’s climax, guests are met with an eyebrow scorching blast of heat.  But the attraction is more than innovative in its style and experience.  Its interactivity features hidden levels of bonus gameplay for guests to unlock.  And unlike traditional interactive attractions, where guests scour the scenes for small, hard-to-hit “target symbols,” the entire Dragon – whether practical or media – is a live target, each with unique reactivity.  Dragons Wild Shooting is wowing guests at Lotte World (South Korea) with its huge cast of lovable silly characters, its ambitious interactivity and its surprise-packed ride experience.

InPark spoke with several of the creative minds behind the attraction. 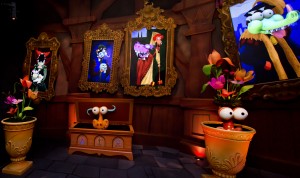 What was your brief from the park for Dragons Wild Shooting?

We were charged with creating a first-of-its-kind media-based, interactive dark ride with an original story for Lotte World’s family guests.  The experience we created is a storybook adventure through a castle overrun by rowdy, silly, rambunctious dragons.

Do you know of any other dark rides with such a theme?

Over the years, there have been other rides set in a medieval fantasy, but this is the first time guests have been immersed in a fairy tale world inspired by children’s book art, with pop-up book illustration environments and whimsically stylized characters.

What were the challenges of installation?

The breakneck-speed schedule combined with a small footprint in an existing space that required creative retro-fitting were the initial hurdles, but the greatest challenge was creating a seamless game-play experience that integrated three-dimensional animatronic figures and interactive media targets with trackless ride vehicles, sound effects, music and special effects. 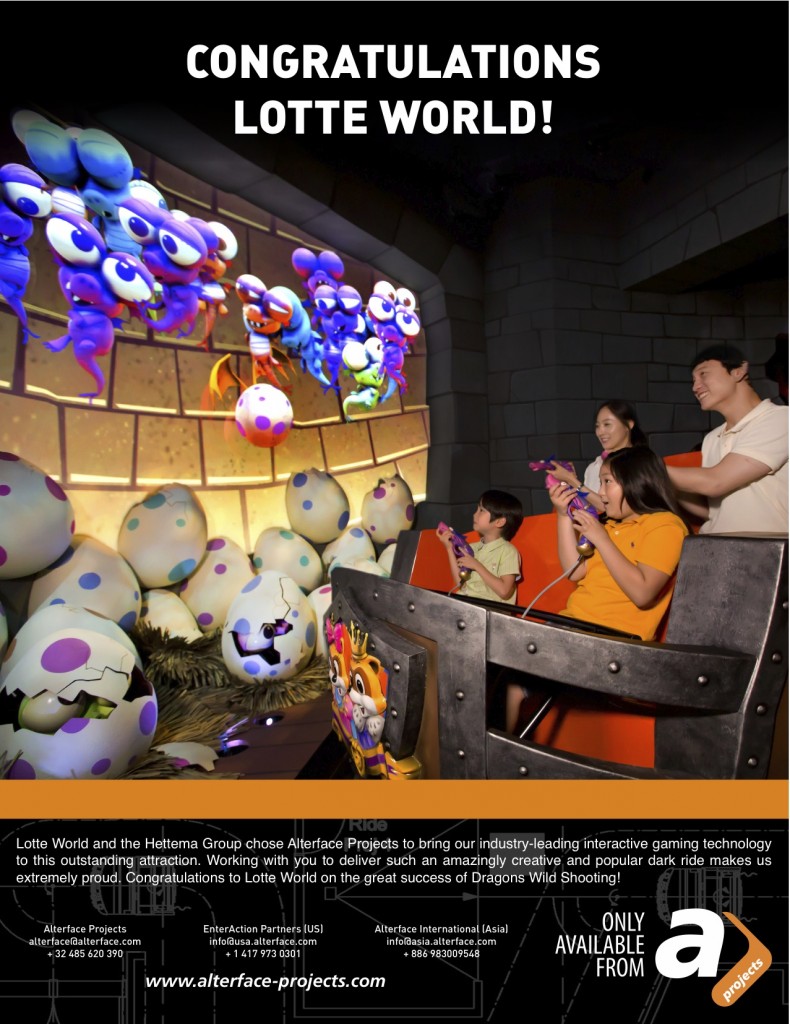 What, for you, is the best part of the ride?

We love our great cast of characters, with a wide variety of quirky dragons, but the glamorously zaftig Queen Dragon – whose minions scurry to fulfil her every need before she barbecues them – gets the biggest laughs in the show.

How does the interactive element enhance the ride experience?

Interactivity combined with the game element personalizes the experience and creates a desire to ride the attraction again and again.  The target reactions triggered by each “hit” are also unique. It’s a surprising adventure with air-blasting “firework dragons,” exploding powder kegs and eyebrow-scorching heat blasts.

What demographic is this attraction targeted to?

The attraction is packed with humorous and engaging characters.  The character interactions and funny vignettes appeal to girls and boys of all ages.   There is so much going on in this ride that even if you aren’t playing the target game, it’s a thoroughly enjoyable experience.

What really made this project successful?

It took a really great team to bring this ride to life. Merging new technologies and a variety of systems into a detailed creative storyline takes dedicated and unique talent.  We appreciated the efforts of each one of our partners. 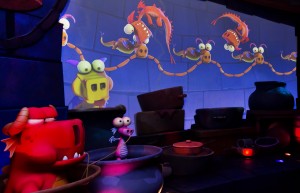 Can you detail what your role was in creating the attraction?

We delivered the shooting system which is the only one in the market that allows “what you see is what you can reach.” Our role was also extended to the portion of interactive show control. We are responsible for the synching of the animatronics and light effects. So instead of a “flat” show control system we have added a layer which takes the movement of the vehicles and the action of the players into account for the show control. Our role started initially as technology provider and we happily ended up being the ones synchronizing the many elements of this ride.

Tell us more about the custom system your company developed.

There are many enhancement our system has brought. First, due to its modular structure we have been able to carve it precisely to the needs of the client without having to recreate something from scratch.

Second, the ride is based on extremely creative screen shapes and technologies that are integrated into those screens in the scenery. There is nothing in the ride which is “standard.”

Finally, we were singularly able to “inter-activate” the scenery and the animatronics. We were very happy to find in [The Hettema Group and Lotte World] partners who were open to the latest developments of our technology. 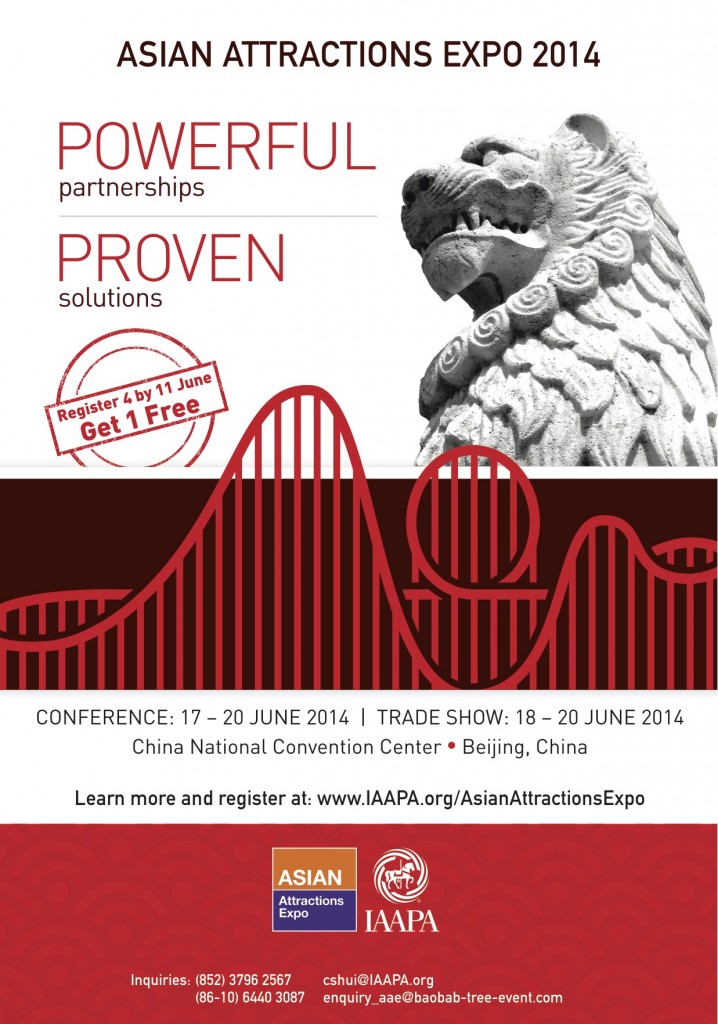 What do you think makes Dragon Wild Shooting a unique attraction?

“Dragons” is a unique blend of physical and media elements- a creative integration of the virtual into the real that has a genuinely natural interactivity. It is not a “video game on wheels” and it is not an old fashioned shooting gallery. It is a piece of great story telling and the illusion is complete. With the addition of  humor, the combination of leading edge suppliers and hard work the result is success.

What are some of the challenges you successfully overcame in developing your work on the project?

We were happy to work with partners who were truly open to challenging the way things are typically done. From a technical point of view, the challenges were to be found on the required sophisticated behavior of the animatronics when “shot” at and extremely high throughput for such a compact attraction. • • •