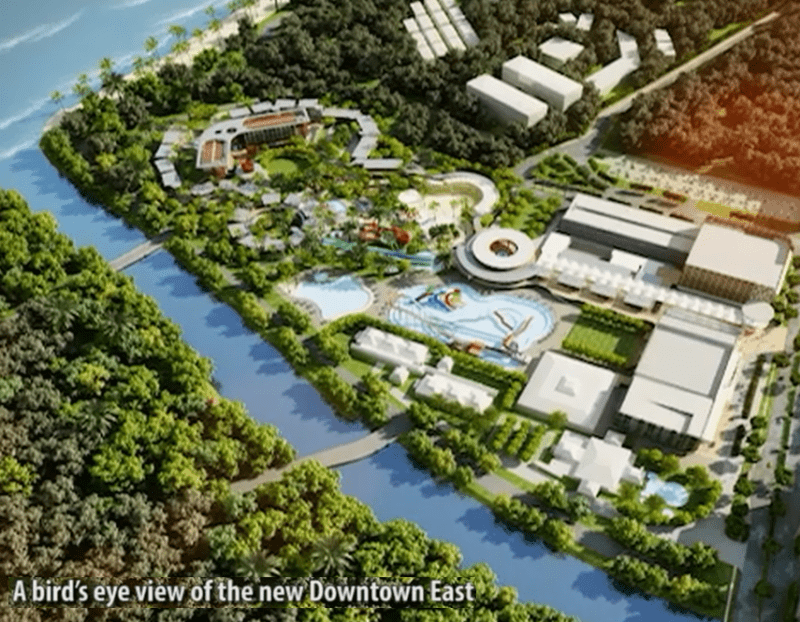 Waterparks are a central component of Asian attraction development strategy

Since the 1990s, the primary focus of themed entertainment destination development in Asia has centered on theme parks and cultural attractions. However, over the last decade as developers have attempted to manage capital costs and leverage the high levels of investment required to develop a large-scale destination resort, waterparks have become an increasingly attractive opportunity. Waterparks can be both the primary project driver as well as a strong second gate development opportunity to enhance the overall experience of a theme park resort destination complex. They can act as key resort drivers and can help establish a project as a multi-day destination by adding critical mass to extend length of stay, induce overnight stays on-site and increase average visitor spending.

Waterparks require significantly lower levels of development capital compared to theme parks (on a per attendee basis) and achieve higher operating margins, particularly as second gate attractions. Waterparks can also achieve stronger admission pricing relative to the required capital expenditure. Case in point is the highly successful Chimelong Waterpark in Southern China, which commands the highest admission pricing during peak season above existing theme parks. On average, waterparks have operating margins of 35%-50% or more. Waterparks adjacent to theme parks have even higher margins as marketing and management expenses are shared.

A family oriented product, waterparks typically perform very well with the local and regional resident market, visitors and resort guests, add to the appeal of a destination during fluctuations in weather patterns and allow for a scalable offering dependent on anticipated demand and climatic conditions.

During the last decade, Japan, Korea, China, and Indonesia have been the Asian market leaders in terms of numbers of parks and volume of visitors. While most of the waterparks in these markets are of the traditional type with wave pools and slides, some have hot-spring, spa and wellness components, and an increasing number of future projects are incorporating some level of theming, branding and intellectual properties, and hotel resort properties similar to the program of Center Parcs in Europe.

The following ranges give an overview of typical Asian waterpark characteristics:

Asian waterparks come in a variety of outdoor and indoor formats, including:

• Freestanding waterpark in a destination area: themed waterparks that do not include a lodging component, although the destination area is likely to have various surrounding accommodations, other theme parks and entertainment attractions nearby. Example: Sunway Lagoon (Kuala Lumpur, Malaysia); Chimelong (Panyu, China)

• Resort with waterpark feature: the waterpark serves as an amenity to the hotel/resort accommodations, which serve as the focal point of the development; the waterpark is principally available to hotel guests only and admission price is usually included in the room rate. Example: Bukit Merah Laketown Resort (Perak Darul Ridzuan, Malaysia) 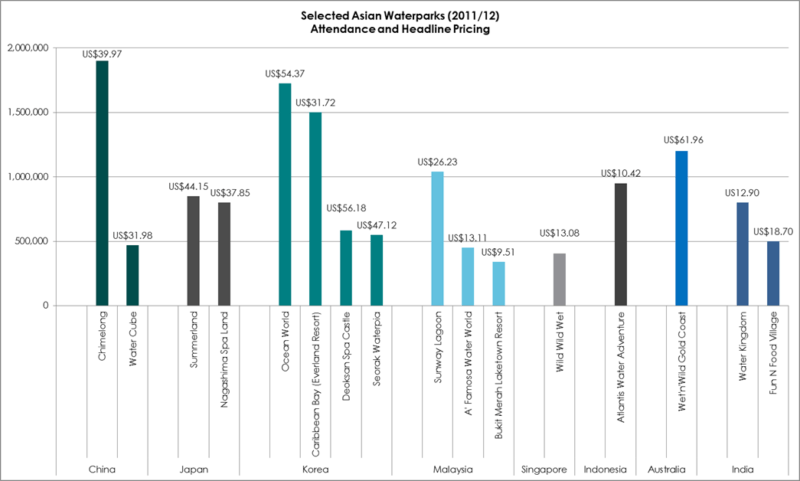 The Chinese waterpark industry is in the early stage of development with the majority of the regional and destination waterparks opened within the last 5-10 years. Leading Chinese waterpark operators include Chimelong, OCT Group, Haichang, and Happy Magic Watercube. Attendance to the major Chinese market waterparks range from 300,000 to 1.9 million with the highest being Chimelong Waterpark.

Bali Waterpark opened in 2011 in Fushun, China featuring a mixture of water themed attractions and reports that it will be one of the largest indoor/outdoor waterparks in China.

Waterparks are very popular among Koreans and are heavily visited by residents. In addition to a theme, these waterparks also have a hotspring and/or spa emphasizing health, rest and relaxation with saunas, Jacuzzis and other features. Typically a combination of indoor and outdoor features, the waterpark/spas take advantage of year round opportunities. These selected parks are either located in a destination area or are a destination waterpark with a resort/hotel component with other amenities surrounding the park.

As part of the upcoming Ocean Kingdom Theme Park Resort due to open on Hengqin Island in 2013, Chimelong Group will open a waterpark slated to be the largest in Asia. OCT will open two waterparks in 2013, one in Shanghai (12 hectares, RMB500 million/US$79 million Playa Maya waterpark) and a second in Yunnan province in a resort setting just outside Kunming.

In Chengdu, a 20,000 hectare-plus indoor waterpark, Paradise Island, is planned to open including multiple hotels (Intercontinental, Holiday Inn, other), spa facilities, food and beverage, large shopping mall, cinemas, and
other amenities. It will be located within the New Century Global Center mixed-use commercial complex, including an art performance center designed by Zaha Hadid

In Hong Kong, Ocean Park plans to open Water World as a second gate adjacent to the park combining the natural setting with pools and waterpark components and the on-site planned hotels.

Finally, Village Roadshow and Guangzhou-based R&F Properties recently announced plans to partner and create a US$550 million theme park destination resort in Lingshui, near Sanya, on Hainan Island which will also contain a branded Wet’n’Wild waterpark as a second gate and is due to open in 2015.

Southern Malaysia will experience significant growth in the waterpark market over the next few years with the opening of the LEGOLAND Malaysia waterpark in 2013 complementing the existing LEGOLAND theme park and Ocean Splash waterpark at Desaru Coast in 2014/15. The LEGO-themed water park is part of Themed Attractions Malaysia (TAR) overall RM720 million investment (US$230 million) in Nusajaya and Johor including an on-site LEGO-themed family hotel. TAR will also open Ocean Splash, a themed waterpark at the upcoming Desaru Coast resort on the southeastern coast of Peninsular Malaysia with close proximity to Singapore. Ocean Splash will be adjacent to the immersive Ocean Quest marine life park. TAR plans to invest RM267 million (US$87 million) in the combined 12+ hectare, Ocean Splash and Ocean Quest attractions.

In Singapore at Resorts World Sentosa, the Adventure Cove Waterpark is due to open at the end of 2012/early 2013. Adjacent to the new Marine Life Park and Universal Studios Singapore, Adventure Cove will feature Southeast Asia’s first hydro-magnetic roller coaster and feature integrated marine-life elements. Additionally, the Wild Wild Wet waterpark at Downtown East will double in size as part of a S$200 million (US$165 million), 5-year redevelopment of Downtown East by the waterpark’s owner NTUC Club. Phase 1 of the project includes the waterpark and a 400-room resort and phase 2 of the project comprises event venues and retail, dining and entertainment establishments.

Village Roadshow is planning to open the A$80 million (US$80 million+) Wet’n’Wild Sydney, Australia in December 2013. The 25 hectare waterpark will have 42 slides and attractions.

In Pattaya, Phuket, Thailand, the Cartoon Network Amazone waterpark is slated to open in 2013. Set on 5.6 hectares, developer Amazon Falls is planning an initial investment of 1 billion Thai Baht (US$32.5 million) and will feature the Network’s popular animated characters in a rainforest setting.

Going forward, waterparks have a highly positive outlook within the Asian attractions industry and strong growth potential. As evidenced by the development history of waterparks in the United States and Europe, waterparks are a key resort component and complementary to the main first gate. The waterpark presents a viable second gate opportunity for destination projects, extending length of stay and increasing visitor spending by offering a full day’s worth of activities to families beyond the traditional core theme park destination. By spurring an overnight stay and a second day of spending, waterparks can propel overall destination resort economics, not only diversifying the attraction offer to the customer, but also expanding the financial opportunity for the developer. ECA also expects to see more eco-resort development with water park components and self-contained family resorts such as the Center Parcs model in Europe and Great Wolf Lodge in the U.S. There will also be increased efforts to integrate theming and branding in Asian waterparks while balancing development costs and a focus on delivering a compelling water-based experience and attractions content. • • •

Joe Kleimanhttp://wwww.themedreality.com
Raised in San Diego on theme parks, zoos, and IMAX films, InPark's Senior Correspondent Joe Kleiman would expand his childhood loves into two decades as a projectionist and theater director within the giant screen industry. In addition to his work in commercial and museum operations, Joe has volunteered his time to animal husbandry at leading facilities in California and Texas and has played a leading management role for a number of performing arts companies. Joe previously served as News Editor and has remained a contributing author to InPark Magazine since 2011. HIs writing has also appeared in Sound & Communications, LF Examiner, Jim Hill Media, The Planetarian, Behind the Thrills, and MiceChat His blog, ThemedReality.com takes an unconventional look at the attractions industry. Follow on twitter @ThemesRenewed Joe lives in Sacramento, California with his wife, dog, and a ghost.
Share
Facebook
Twitter
Linkedin
Email
Print
WhatsApp
Pinterest
ReddIt
Tumblr
Previous articleFrom the archives: InPark Issue 44
Next articleBuilding the unseen