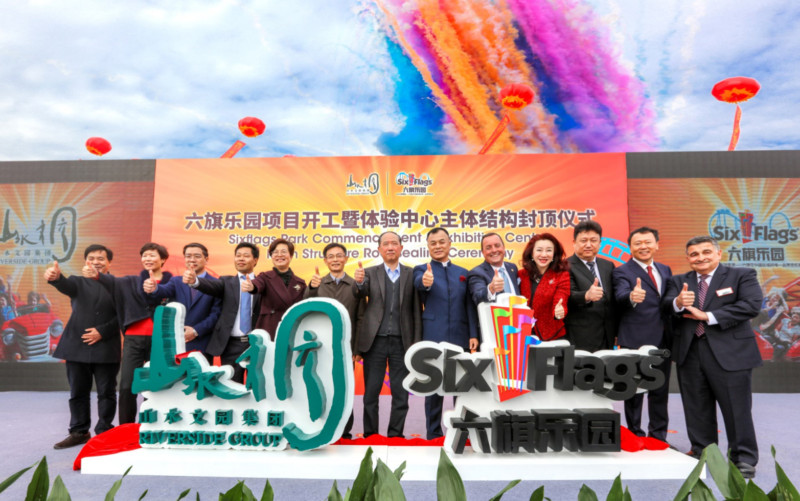 It is imperative today for LBE developers and operators to differentiate their products with unique experiences and IP. In a fast developing and increasingly competitive market, compelling attraction content and an operator’s ability to utilize it both to draw and entertain visitors is at the core of any successful LBE destination. (LBE=location based entertainment; IP = intellectual property.)

Established domestic operators tend to create their own themes, brands and characters and have limited interest in international IP for attraction projects – for example, Chimelong and Wanda Group in China. By comparison, newer domestic investors and developers entering the industry are increasingly interested in partnering with international developers, operators and IPs to bring internationally branded content that can help differentiate their destinations and extend their appeal beyond the regional market.

As a result, leading operating groups, such as Merlin Entertainments Group, Village Roadshow, Parques Reunidos, and iP2, among others are partnering with international IPs to improve their offer to developers throughout the region. The Novotown project in Hengqin (Zhuhai, China) exemplifies this phenomenon, where Zhuhai Hengqin Laisun Creative Culture City Co. Ltd. has partnered with Lionsgate Entertainment to provide the IPs and content, and with Village Roadshow to operate the planned 22,000-square meter indoor Lionsgate Entertainment World that will open at the end of 2018.

Asian markets offer varying levels of international IP inclusion. Japan exhibits the highest level, where Disney opened the first internationally branded theme park in Asia almost 35 years ago (Tokyo Disneyland; 1983). China is catching up quickly, though, with the recent opening of Shanghai Disneyland and upcoming projects from Universal Studios, LEGOLAND Parks, and Lionsgate, among others, in leading tier 1 and tier 2 cities.

What’s in the pipeline?

While Japan and Singapore have made international IP a fundamental tenet of their tourism offer, broader Asia is full of pipeline internationally branded LBE projects. ECA expects China, Japan and Malaysia to lead the way over the next decade in terms of these projects due to market dynamics (scale and income) and government support. One project that recently opened is LEGOLAND Japan in Nagoya, April 2017.

The following is a selection of projects that have been announced and begun to make progress in the planning and development process:

• SeaWorld recently announced a partnership with Zhonghong Group – intend to develop multiple projects for opening in 2020+, both theme parks and indoor LBE attractions

• There are several branded theme park/attractions under consideration in South Korea. India is considered the next emerging large-scale market for LBE development after China.

Who’s in the market?

In addition to the publicly announced projects and beyond the traditional licensors, a multitude of entities are exploring ways in which to extend their brand into Asia. These groups include:

• Merlin Entertainments and others – Operating groups like Merlin also have significant plans for rollout development in Asia that will utilize international IP. Merlin has announced plans for the development of 40 new Midway attractions globally by 2020, of which Asia will be a key focus with an expansion strategy based on ‘cluster’ locations where Merlin can achieve an operating cost, marketing and cross-selling advantage.

Integrated resorts and IP – who, what and where

• Malaysia – As shown by the inclusion of Universal Studios in Genting’s Resorts World on Sentosa Island in Singapore, internationally branded IP can play a critical role in expanding tourism drawing power for a city/country and in acquiring gaming license approval. Genting has also fully re-envisioned the theme park at Genting Highlands outside Kuala Lumpur (20th Century Fox World theme park) as part of the RM10 billion (USD2.3billion) Genting Integrated Tourism Plan in Malaysia.

• Japan – Japan is considering the approval of integrated resorts with final approval and city selection (Tokyo, Osaka, and Yokohama are the expected frontrunners) coming as soon as the end of 2017, and it is expected that IPs and themed attractions will play a central role in the winning bids.

• Philippines – The first IR opened in Manila, Philippines in 2013 and the City of Dreams Manila project, which opened in 2014, offers the 40,000-square foot DreamWorks branded DreamPlay children’s attraction.

• Macau – Macau, which has long had integrated resorts, recently began to include internationally branded IP attractions to diversify the guest offer with the opening of the Warner Bros. Batman 4D flight simulation ride at Studio City.

• Rest of Asia – Other markets across Asia, including Vietnam and Korea, are in talks to develop IRs with international IP. • • •

Based on ECA’s global and Asian industry experience, we have summarized key impacts that IP provides for LBE development in the Asia-Pacific region:

• Raises the performance threshold for developers by requiring a seasoned, professional operations team

About Entertainment + Culture Advisors (ECA) Entertainment + Culture Advisors (ECA) is focused on delivering strategic economic insights for attraction, entertainment and cultural projects worldwide. Based in Los Angeles and Hong Kong, the ECA team has worked extensively in Asia including Singapore/Malaysia (Southeast Asia) during the past 15+ years, including advising on attraction strategy, business planning and feasibility of theme park and indoor LBE attraction development. For further information on ECA please visit: www.entertainmentandculture.com

Joe Kleimanhttp://wwww.themedreality.com
Raised in San Diego on theme parks, zoos, and IMAX films, InPark's Senior Correspondent Joe Kleiman would expand his childhood loves into two decades as a projectionist and theater director within the giant screen industry. In addition to his work in commercial and museum operations, Joe has volunteered his time to animal husbandry at leading facilities in California and Texas and has played a leading management role for a number of performing arts companies. Joe previously served as News Editor and has remained a contributing author to InPark Magazine since 2011. HIs writing has also appeared in Sound & Communications, LF Examiner, Jim Hill Media, The Planetarian, Behind the Thrills, and MiceChat His blog, ThemedReality.com takes an unconventional look at the attractions industry. Follow on twitter @ThemesRenewed Joe lives in Sacramento, California with his wife, dog, and a ghost.
Share
Facebook
Twitter
Linkedin
Email
Print
WhatsApp
Pinterest
ReddIt
Tumblr
Previous articleHolovis: Real Time and Immersive
Next articleVekoma: Heavy Metal