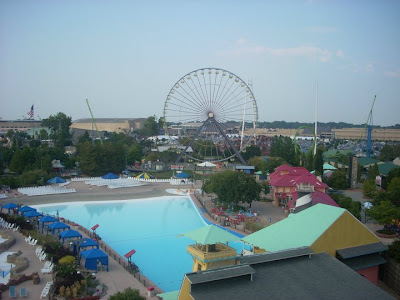 Commenting on KKRC’s proposal, Ed Hart remarked, “In addition to responding to the specific questions the state posed in the RFP, we included a detailed business, marketing, and financing plan, as well as an executive summary of that plan, so the state would have the most thorough explanation possible of our vision for Kentucky Kingdom. We are making all of this information available to the public and we encourage any other bidders to make their proposals public as well. After all, Kentucky Kingdom is owned by the taxpayers of Kentucky and they have a right to know what’s going on. As noted in a number of news reports, many people are concerned that the state’s decision-making process for Kentucky Kingdom has been less than transparent.”

The highlights of KKRC’s proposal are as follows:

Hart added, “Our intent is to return Kentucky Kingdom to its previous position as the region’s top ride park, situated on beautifully landscaped grounds. Only Kings Island will have significantly more rides – about 30% more. But since Kings Island’s attendance is three times greater than Kentucky Kingdom’s, their guests often wait in long lines for the rides. Our guests won’t have those long waits. That translates to greater guest satisfaction – and that’s what builds attendance.”

When asked about Governor Beshear’s indications that Kentucky Kingdom should perhaps be demolished to make way for a better use, Bruce Lunsford said, “The Governor wants to permit casino gambling in Kentucky so the state doesn’t lose revenue to Indiana, Ohio, and Tennessee. I think the same thought process should apply to theme parks. We don’t have casino gambling right now, but we do have a great theme park. We don’t want to demolish a valuable state asset and thereby surrender even more revenue to those other states.”

Since he has been involved for almost three years in an effort to reopen Kentucky Kingdom, Ed Hart was asked whether he is getting frustrated with the process. Hart responded, “I am concerned that the Fair Board and state economic development and tourism officials have not shown more urgency about reopening Kentucky Kingdom, especially since they have repeatedly declared to the media that it is their number one priority.”

Hart added, “Including our response to the RFP, we have submitted a total of four proposals to the state. The first two were submitted prior to September 30, 2011, when the Fair Board, chaired by Ron Carmicle, abruptly ended the discussions with my company. At Governor Beshear’s request, we gave a third proposal to Mary Lassiter, Secretary of the Executive Cabinet and State Budget Director, on August 7, 2012. Shortly thereafter, the Governor instructed the Fair Board to seek other bidders, but encouraged me and my partners to submit our proposal as well. It has been somewhat frustrating.”

Mary Moseley added, “Kentucky Kingdom is essential to Louisville’s hospitality industry. Many hotels and motels rely on business generated by the theme park. To lose the park or see it reduced to a smaller operation that would not encourage overnight stays would really be a missed opportunity for Louisville. How is it that the nation’s 16th largest metropolitan market is content to let its theme park sit idle?”

Ed Glasscock summed up KKRC’s position, saying “We feel the Louisville Convention & Visitors Bureau, the Louisville delegation to the state legislature, and other local and state officials should be more active in supporting efforts to reopen Kentucky Kingdom, especially since re-opening the park is in the best interests of our state and our local community. Our proposal provides both substantial start-up capital and a program of continued annual reinvestment, which will ensure the park’s success. We have a seasoned local operator in Ed Hart, who has a proven track record. And last but not least, my partners and I, being Louisville residents, will be responsive to the community.”

THE COMPLETE KKRC PROPOSAL CAN BE FOUND HERE ON IPM NEWSDOCS

Joe Kleimanhttp://wwww.themedreality.com
Raised in San Diego on theme parks, zoos, and IMAX films, InPark's Senior Correspondent Joe Kleiman would expand his childhood loves into two decades as a projectionist and theater director within the giant screen industry. In addition to his work in commercial and museum operations, Joe has volunteered his time to animal husbandry at leading facilities in California and Texas and has played a leading management role for a number of performing arts companies. Joe previously served as News Editor and has remained a contributing author to InPark Magazine since 2011. HIs writing has also appeared in Sound & Communications, LF Examiner, Jim Hill Media, The Planetarian, Behind the Thrills, and MiceChat His blog, ThemedReality.com takes an unconventional look at the attractions industry. Follow on twitter @ThemesRenewed Joe lives in Sacramento, California with his wife, dog, and a ghost.
Share
Facebook
Twitter
Linkedin
Email
Print
WhatsApp
Pinterest
ReddIt
Tumblr
Previous articleChance Rides to Manufacture 250 ft Tall Bussink Observation Wheel
Next articleHoliday World Announces 2013 Additions to Splashin’ Safari Including Rethemed Pilgrim’s Plunge