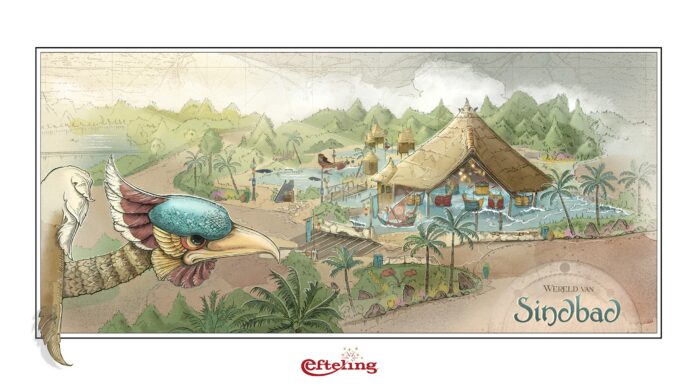 Efteling — the fairytale theme park in the south of Holland — will start adjusting a number of attractions in the park’s adventurous area of Reizenrijk this fall. This will be the first phase of a development plan for this whole area. With an investment of 2.8 million euros (US$3.5 million), the attractions Adventure Maze and Monsieur Cannibale will be adapted to become Archipel and Sirocco respectively. Both rides will be themed to Sindbad the Sailor (commonly spelled Sinbad), originating from the stories of “One Thousand and One Nights,” also popularly known as “Arabian Nights.”

“Recently, we received a positive decision from the Council of State, which clears the way for us to expand our theme park on the east side in the future. Of course, we are very happy about that, but due to the coronavirus pandemic, we have postponed the large expansion plans for the time being,” said Efteling CEO Fons Jurgens. “Therefore, we are now focusing on the park area adjacent to the planned area of expansion on the east side.”

The enterprising and wealthy merchant Sindbad the Sailor has been in the theme park since 1998. The indoor roller coaster Vogel Rok is an element from one of his seven sea voyages. Sindbad — and his seven adventurous sea voyages — is one of the most popular stories from “One Thousand and One Nights,” and therefore recognizable to a wide and diverse audience. Opposite Vogel Rok, from the end of 2021 onwards, two new elements from Sindbad’s sea voyages will be found.

Archipel: Today’s Adventure Maze will become an exciting island, where young explorers can brave the (play) elements and discover the surprises hidden there.

Sirocco: The spinning cauldrons of the current Monsieur Cannibale attraction become merchant boats. A whirlwind has started up at sea and everyone who sets foot on board embarks on a dizzying adventure until the storm subsides.

Lead designer Sander de Bruijn said about the project, “As a designer at Efteling, it is my goal to create a natural and fairytale environment providing a well-rounded experience through well-known fairytales and stories. The sea voyages of Sindbad the Sailor are a perfect stepping stone to create a logical connection within this part of the Efteling theme park and to further expand the theming of the indoor roller coaster Vogel Rok. This way, a more complete World of Sindbad is created and with that an adventurous experience for our guests.”

In the development and application of the stories of Sindbad the Sailor, Efteling was assisted by Richard van Leeuwen, lecturer in Islamic Studies at the University of Amsterdam. Richard van Leeuwen translated — first in 1993 — the authentic Arabic texts of the “One Thousand and One Nights.” He studied Arabic in Amsterdam and Damascus, Persian in Leiden, obtained a doctorate in historical research and published articles and books on “One Thousand and One Nights.” He won several awards for his work, including his translations. Richard van Leeuwen said about the cooperation with Efteling, “The used tales of Sindbad and his sea voyages contain a large reservoir of cultural characters. This offers many possibilities, that in combination with Efteling’s ambition to tell stories in an inclusive manner, are sure to create a positive image of the rich Arab culture.”