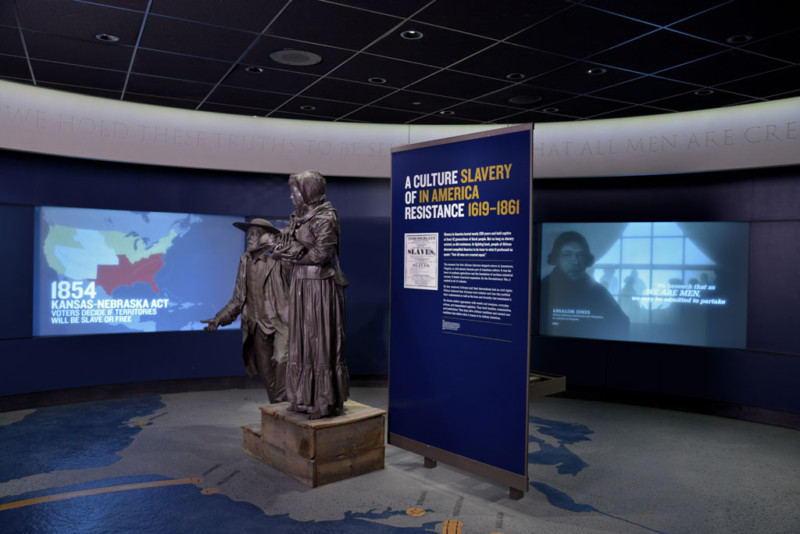 For the past 20 years, the National Civil Rights Museum has been located at the site of the former Lorraine Motel, where Martin Luther King, Jr. was assassinated.  Electrosonic worked closely with exhibition designers Howard+Revis Design Services on numerous new displays and exhibition spaces.

Visitors enter the museum at the Slavery & Culture of Resistance exhibit, where they wait for the orientation show in the Introductory Theater. The “Mapping Slavery and Resistance” exhibit features an ultra short-throw NEC projector and an 85 by 53-inch rear projection screen.

In the newly-enlarged Introductory Theater a 12-minute movie introduces visitors to the museum and recaps the history of the civil rights movement.  Electrosonic outfitted the theater with a 6,000-lumen, ceiling-mounted Christie 3 chip DLP projector, which makes an image on a 20 by 11.25-foot screen, which is part of a door, supplied and installed by L.A. Propoint.  At the end of the show, the screen, door assembly moves to usher visitors into the main exhibit area.

Electrosonic also provided the theater’s surround sound system and the AV system controller, which times and commands the show.  A control touch panel is next to a lockable wall-mounted box containing a hand-held paging mic for docents.  An FM wireless assisted listening system has also been supplied for visitors. 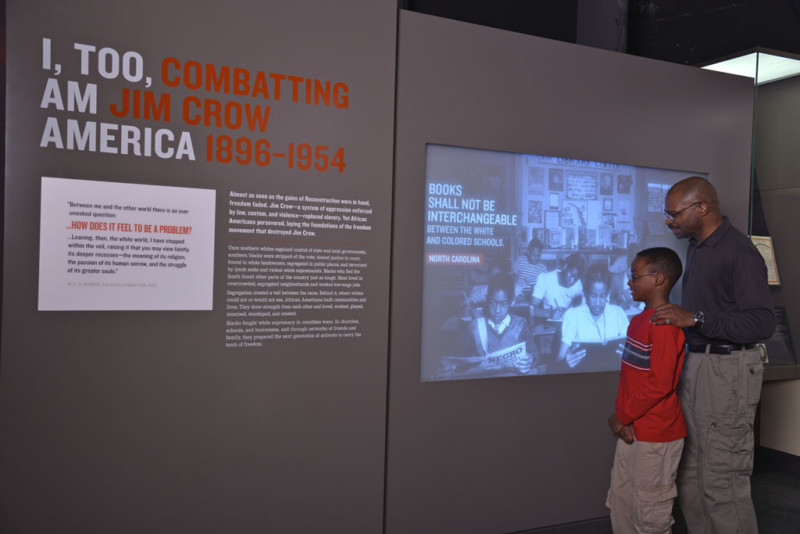 In addition to operating in film mode, the theater is equipped for presentations with a small portable rack featuring a Blu-ray player and AV switcher.  A custom plate enables connection to an Ethernet network and the VGA output of a laptop; remote control is provided on an Apple iPad.

The main exhibit area is packed with compelling displays conveying the struggles of the civil rights movement.  “Living Under Jim Crow” features 30 portraits, which deliver testimonials when touched.  “Brown Versus Board of Education” has a 67 by 50 inch front projection screen, a 3,000-lumen ultra short-throw NEC projector, and wall and ceiling-mounted speakers.  Three 55-inch monitors, in portrait mode, fitted with a multi-touch overlay frame help visitors engage in “Mapping School Desegregation” across the country.

“Albany Freedom Songs” is highlighted by a 6,000-lumen ceiling-mounted Panasonic projector, four wall-mounted speakers in the ceiling alcove and a 10 by 7.6-foot screen wall painted with Screen Goo.  A similar projector displays photos from the “Children’s Crusade” on a screen made from a special film applied to a glass substrate so images can be viewed from the front or back.

Four interactive stations, featuring mini PCs, Elo 15-inch touch screens, headphone amps and handsets, bring the “March on Washington” to life.  The momentous “Freedom Summer of 1964” is illustrated by a 3,000-lumen ultra short-throw NEC projector mounted below and behind a rear projection screen made of a rigid material with an image size of approximately 62 by 44 inches. 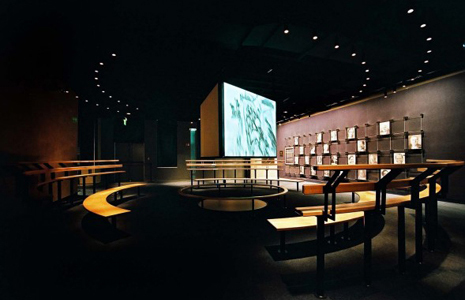 For “Join the Movement” Electrosonic installed four 55-inch ultra-narrow mullion monitors into a touch table with eight active mini array speakers in the table surround.  The four monitors are sourced by PCs and turned on and off by the AV control system.

Martin Luther King, Jr. makes his famed “Mountain Top Speech” on a 55-inch monitor and four ceiling speakers. Gospel singer Mahalia Jackson is heard over four ceiling speakers, which gradually increase in volume as visitors enter the space between the rooms where King and his guests stayed that fateful night in Memphis.

The museum tour ends almost as it began, this time in the new Ellipsis Theater where a 6,000-lumen 16:9 ceiling-mounted Panasonic projector displays images on a 183 by 103-inch wall-mounted screen.  One long speaker is installed under the screen along with eight ceiling speakers and two ceiling-mounted subwoofers.  An FM wireless assisted listening system is available for visitors.

1220 Exhibits was the exhibit fabricator; Cortina Productions and Second Story were the media designers and producers.

Joe Kleimanhttp://www.themedreality.com
Raised in San Diego on theme parks, zoos, and IMAX films, Joe Kleiman would expand his childhood loves into two decades as a projectionist and theater director within the giant screen industry. In addition to his work in commercial and museum operations, Joe has volunteered his time to animal husbandry at leading facilities in California and Texas and has played a leading management role for a number of performing arts companies. Joe has been News Editor and contributing author to InPark Magazine since 2011. HIs writing has also appeared in Sound & Communications, LF Examiner, Jim Hill Media, and MiceChat. His blog, ThemedReality.com takes an unconventional look at the attractions industry. Follow on twitter @themedreality Joe lives in Sacramento, California with his fiancé, two dogs, and a ghost.
Share
Facebook
Twitter
Linkedin
Email
Print
WhatsApp
Pinterest
ReddIt
Tumblr
Previous articleNew Mini-Land Celebrating the Joy of Fine French Cuisine and Rats to Open July 10 at Disneyland Paris Resort
Next articleDOME Ride Theater Next Gen Media Based Attraction to Be Unveiled by Attraktion! and Intamin at AAE Beijing