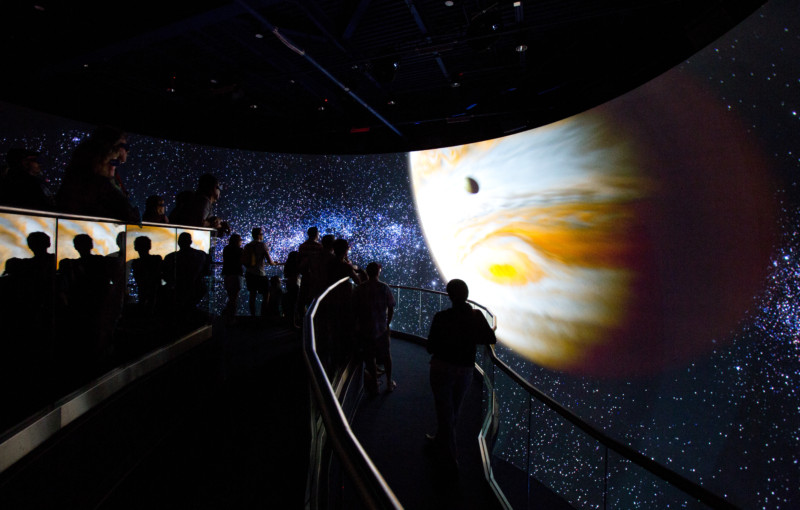 Electrosonic has a longstanding relationship with Kennedy Space Center Visitor Complex.  “We’ve worked on several attractions at the visitor complex including the Lunar Theater at the Apollo/Saturn V Center and Space Shuttle Atlantis,” says Electrosonic project manager Christopher Cooper.  “We worked closely with designer Falcon’s Treehouse on this latest project, which includes a 4D multi-sensory theater, as well as a host of other interactive exhibits and show areas.”

Heroes & Legends gives visitors a sense of what it was like to embark on the first human journeys into space.  By focusing on the pioneering efforts of the Mercury and Gemini astronauts, it provides background and context to enrich the guest experience across the entire visitor complex. 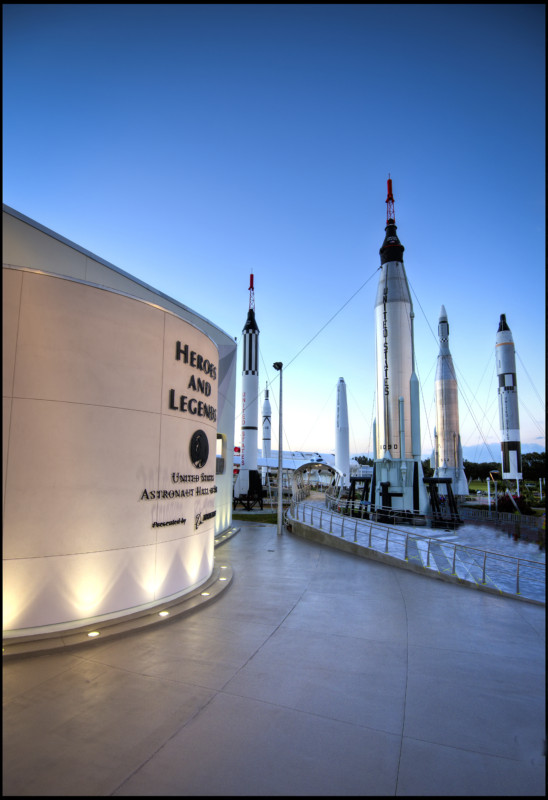 Visitors are greeted by a bas relief of the Mercury 7 astronauts on the façade of the building.  They enter and ascend a ramp where “What is a Hero?” unfolds.  The seven-minute multimedia presentation addresses what makes a hero – not only astronauts but greats like Martin Luther King Jr. and author Mark Twain.  A pair of ceiling-mounted Christie DWU851-Q projectors display live-action footage on two asymmetrical widescreens.  Diamond-shaped tiles around the room feature graphic imagery and hero portraits; models of rockets fill the center of the room.  During the show lighting effects reveal three hidden features: a bicycle, a full-size model robot from “Lost in Space,” and a school desk to complement the presentation.

Next, visitors see space exploration “Through the Eyes of a Hero,” in the 4D multi-sensory theater.  Fourteen Christie Boxer 4K30 projectors, in stereo (Left Eye/Right Eye) pairs, project a star field onto a roughly 220-degree screen before the show begins.  Then the seven-and-a-half-minute video show, complete with wind effects, gives visitors a sense of the danger and excitement of the first manned space missions through the spoken-word experiences of astronauts Alan Shepard, Neil Armstrong, John Glenn and Jim Lovell.

Electrosonic outfitted the Christie Boxers with custom Jenoptik lenses to accommodate the projectors’ placement close to the screen surface as well as the wraparound, concave shape of the screen itself.

Visitors exit onto a mezzanine with a Mercury-Redstone rocket suspended from the ceiling.  They descend to the first floor to “A Hero Is…” featuring a host of interactive exhibits and space program artifacts.  The former Mercury Mission Control Center is on display with a world map tracking John Glenn’s first orbital flight in 1962.  It features two Christie DWU851-Q projectors flanking the tracking board and an array of QSC point source speakers overhead. 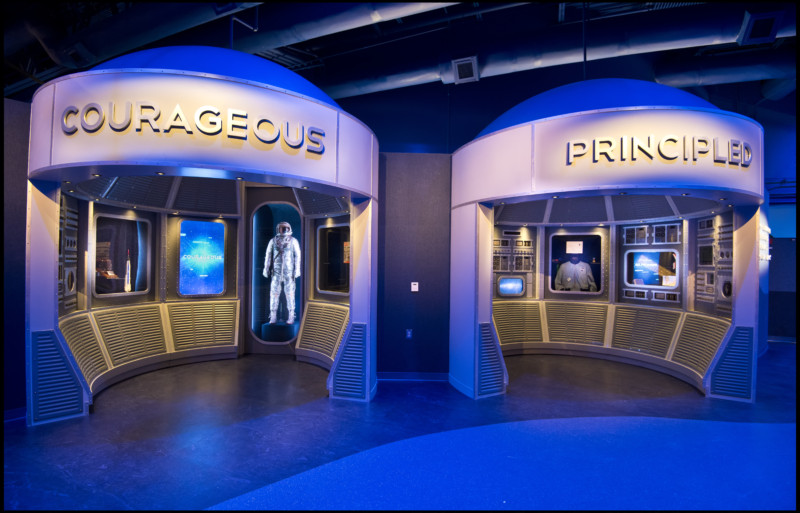 Nine stand-alone pods detail the attributes of a hero: Inspired, Curious, Passionate, Tenacious, Disciplined, Confident, Courageous, Principled and Selfless.  Visitors entering a pod trigger an IR camera and IR emitter, which prompt a touchscreen where they can call up video about artifacts related to the attribute.

Before leaving the area visitors see the actual Gemini IX-A capsule offering two distinct views of the space-flown vehicle. On one side they look through a Plexiglas window to the interior designed for two astronauts.  On the other side they peer through a custom viewing portal to see a holographic Pepper’s ghost effect showing astronaut Gene Cernan on a dramatic spacewalk.  Electrosonic achieved the impressive VFX with a Christie DWU851-Q projector and MirrorView angled, mirrored glass.  “The projection looks like an astronaut tethered and floating by the capsule,” says Cooper.  “In addition, archival footage and other media is mapped to the contour of the capsule and reflected off the glass.”

The U.S. Astronaut Hall of Fame completes the attraction.  A large bronze statue of Alan Shepard, the first American in space, is a focal point at the entrance.  The room’s walls are covered with plaques recognizing the 93 inductees to date.  Its centerpiece is a 10-foot diameter cylindrical rear-screen projection surface featuring five Christie DWU951-Q projectors.  Overhead are angled 70-inch NEC monitors; five touchscreen kiosks ring the projection surface.  A montage of images comprises a loop appearing on all the screens; visitors at the kiosks can select their favorite Mercury 7 astronaut for a simulated photo op.

Electrosonic employed an array of 7th Sense media servers for Heroes & Legends and the Hall of Fame, including Delta 2, Nano and Nucleus units as well as two custom Infinity servers for the 4D theater.

The Nassal Company supplied the millwork and metal work; Metal Masters provided custom projector stands and a custom frame for the specialty glass required for the Pepper’s ghost effect.

At Electrosonic, Toni Losier and Andrew Kidd were the account executives for the project and Tony Peugh was the senior programmer.

Joe Kleimanhttp://wwww.themedreality.com
Raised in San Diego on theme parks, zoos, and IMAX films, InPark's Senior Correspondent Joe Kleiman would expand his childhood loves into two decades as a projectionist and theater director within the giant screen industry. In addition to his work in commercial and museum operations, Joe has volunteered his time to animal husbandry at leading facilities in California and Texas and has played a leading management role for a number of performing arts companies. Joe previously served as News Editor and has remained a contributing author to InPark Magazine since 2011. HIs writing has also appeared in Sound & Communications, LF Examiner, Jim Hill Media, The Planetarian, Behind the Thrills, and MiceChat His blog, ThemedReality.com takes an unconventional look at the attractions industry. Follow on twitter @ThemesRenewed Joe lives in Sacramento, California with his wife, dog, and a ghost.
Share
Facebook
Twitter
Linkedin
Email
Print
WhatsApp
Pinterest
ReddIt
Tumblr
Previous article
Euro Attractions Show 2017 To Be Held in Berlin
Next article
LEGOLAND California Resort Grows With Groundbreaking for Second Themed Hotel