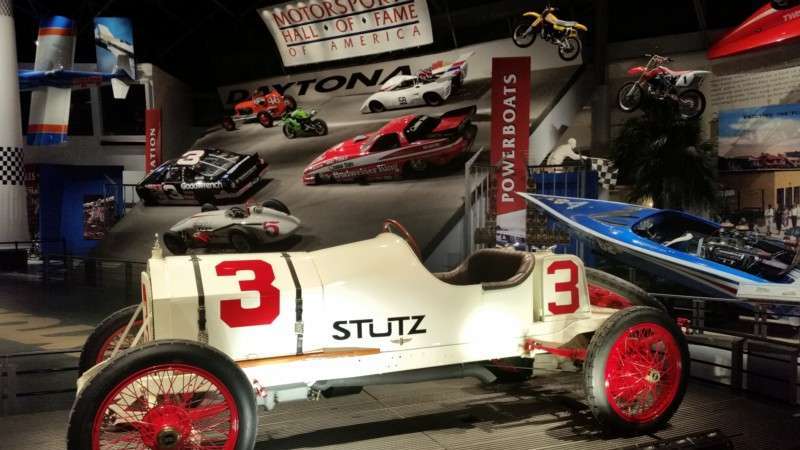 When a projection systems upgrade was required for the Motorsports Hall of Fame of America (MSHFA), Electrosonic was asked to design, install, program and commission projection and AV equipment for the Robert E. Petersen Theatre and the Great Moments exhibit.

The MSHFA is the only hall of fame encompassing the entirety of American motorsports, including cars, motorcycles, off-road vehicles, powerboats and airplanes.  Originally located in Novi, Michigan, the facility relocated to the Daytona International Speedway in Florida in 2016.

Electrosonic replaced the aging projector in the Robert E. Petersen Theatre with a 12,000 lumen Christie HD laser phosphor projector which displays three looped videos on the screen.  The videos showcase the Speedway and the 2017 Daytona 500, welcome visitors to the Hall of Fame, and pay tribute to Robert E. Petersen, who headed an auto-themed publishing empire that included Hot Rod and Motor Trend magazines.

Electrosonic also replaced a 20-year old PC-based control system with a Crestron CP3 system and easy-to-use iPad interface and installed a new QSC Core audio DSP system.  “By replacing equipment at the end of its life cycle we were able to shrink almost a full rack of gear to just about one-quarter of a rack,” notes Davidowitz, who programmed the new Crestron control system.

In addition, an upgrade was made to the sound system that plays racing-themed music for visitors following the queue line ramps up to the Petersen Theatre.  Electrosonic installed 14 QSC surface-mount speakers to boost the audio experience en route to the theatre’s presentations.

The Great Moments exhibit is a small theater with bench seating featuring a 30-minute looped video on the lives and careers of famous figures in motorsports history.  Electrosonic outfitted it with a new Panasonic HD projector and BrightSign HD media player. The exhibit is a stand-alone system that is automated to turn on and off with a built in scheduler within the BrightSign.

The upgrades to the MSHFA’s two theaters future-proof the spaces by facilitating the addition of other presentation sources and new control parameters, such as lighting control.

Joe Kleimanhttp://wwww.themedreality.com
Raised in San Diego on theme parks, zoos, and IMAX films, InPark's Senior Correspondent Joe Kleiman would expand his childhood loves into two decades as a projectionist and theater director within the giant screen industry. In addition to his work in commercial and museum operations, Joe has volunteered his time to animal husbandry at leading facilities in California and Texas and has played a leading management role for a number of performing arts companies. Joe previously served as News Editor and has remained a contributing author to InPark Magazine since 2011. HIs writing has also appeared in Sound & Communications, LF Examiner, Jim Hill Media, The Planetarian, Behind the Thrills, and MiceChat His blog, ThemedReality.com takes an unconventional look at the attractions industry. Follow on twitter @ThemesRenewed Joe lives in Sacramento, California with his wife, dog, and a ghost.
Share
Facebook
Twitter
Linkedin
Email
Print
WhatsApp
Pinterest
ReddIt
Tumblr
Previous article
INTERVIEW: Association of Children’s Museums Brings InterActivity to Pasadena
Next article
BIE and Shanghai Municipal Government Open World Expo Museum