Electrosonic Brings the British Parliament to Life in 360 Degree Theater 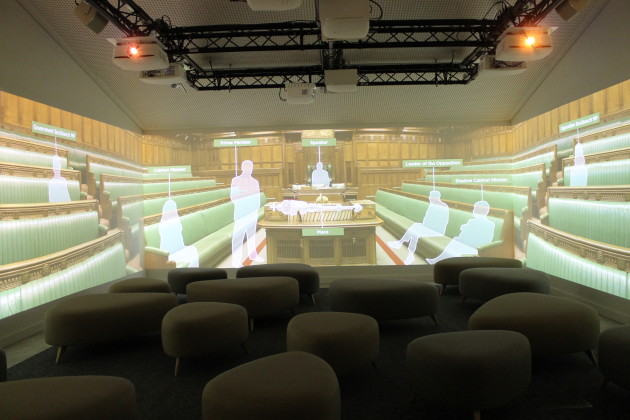 London, UK (December 15, 2015) – Monumental Parliamentary history has been brought to life using audio-visual technology in the new and highly captivating Parliamentary Education Centre. Electrosonic was responsible for the AV design and systems integration for the ‘Discovery Space’, located near the Palace of Westminster, London.

The centre, designed to connect young people with parliament and democracy, utilizes 360 degree projection technology to envelop students in a fast-paced experience that blends engaging content with spectacular visuals. Four Optoma projectors were ceiling mounted to facilitate the continuous video display around the walls, giving students a real feeling of actually being part of political history.

Electrosonic worked alongside Centrescreen for the visual content, which included a memorable and visually vibrant 15-minute production where historical events connected to each Chamber are depicted.

Students see events such as when the suffragettes fiercely protested in the House of Commons in 1908, and when the Duchess of Queensbury attempted to gain access to the House of Lords Chamber in 1739. The projection is accompanied by six Tannoy Di 5a powered speakers to create an immersive sound.

To ensure that all audiences ranging from key stage two to five respond positively to the show’s core messages, two versions of the film were created with differing levels of visual intensity and the language used. When entering the room, the desired show can be selected simply via an iPad.

As a result of the new Education Facility, the Houses of Parliament Education Service are expecting student visits to more than double in 2016 from 45,000 to 100,000.

“The Discovery Space is an outstanding visual experience that is the show piece of our new Education Centre,” commented Dr. Emma-Jane Watchorn, Head of Education at the Houses of Parliament. “We’re passionate about engaging young people with democracy, and the Immersive Space enables us to do that in a unique and engaging way.”

The Discovery Space is connected to the Electrosonic ESCAN remote monitoring service to support continuous operational reliability. In the event of a fault occurring with the AV systems, an alert will be created for the Electrosonic team to swiftly respond.

Joe Kleimanhttp://wwww.themedreality.com
Raised in San Diego on theme parks, zoos, and IMAX films, Joe Kleiman would expand his childhood loves into two decades as a projectionist and theater director within the giant screen industry. In addition to his work in commercial and museum operations, Joe has volunteered his time to animal husbandry at leading facilities in California and Texas and has played a leading management role for a number of performing arts companies. Joe has been News Editor and contributing author to InPark Magazine since 2011. HIs writing has also appeared in Sound & Communications, LF Examiner, Jim Hill Media, and MiceChat. His blog, ThemedReality.com takes an unconventional look at the attractions industry. Follow on twitter @ThemesRenewed Joe lives in Sacramento, California with his fiancé, two dogs, and a ghost.
Share
Facebook
Twitter
Linkedin
Email
Print
WhatsApp
Pinterest
ReddIt
Tumblr
Previous articlePHOTOS: Beyond the Screen at Disney’s Movie Palace
Next articleADG Work Showcased at Nine of USA Today’s Top 10 Indoor Waterparks