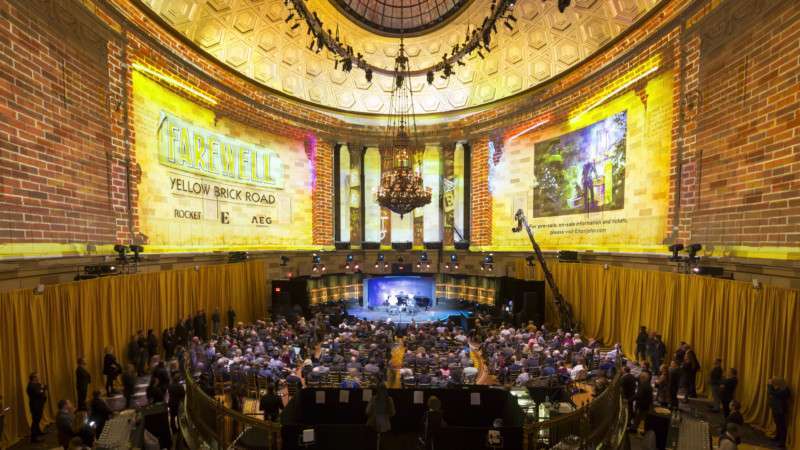 Elton John may be retiring from touring but not before he says good-bye to fans on a massive, 300-show worldwide tour dubbed, “Farewell Yellow Brick Road.”  John made the announcement at New York City’s Gotham Hall where event producers Spinifex Group called on WorldStage to projection map the walls and dome of the event space where John performed “Tiny Dancer” and “I’m Still Standing.”

Torrance, California-based Spinifex Group staged the entire event, created the media and opened the proceedings with an immersive VR experience of their own devising that provided a dynamic look back at the singer’s biggest hits.  Fans at the Troubadour in Los Angeles and a venue in London watched a live stream of the Gotham Hall event while thousands more tuned in on YouTube.

WorldStage was tasked with providing video projection mapping for Gotham Hall, a neo-classical building dating from the 1920s that once housed the Greenwich Savings Bank and now serves as an event space in midtown Manhattan.  The oval-shaped interior is a clear span with a coffered dome ceiling with a skylight at its apex.

“We projection mapped the walls, including the four architectural columns behind the stage, which comprised more than a 270º space,” says WorldStage Account Executive Lars Pedersen.  “We also mapped the dome up to the perimeter of the skylight, which had not been done at that venue before. The key was using an extremely accurate 3D model we had created from a laser scan of the interior space in order to locate the projectors and make sure all the intended surfaces were covered.”

The laser-scan model also provided the basis for content previsualization.  “We shared the model data with Spinifex and tested the content they created by loading it into the disguise media server platform before arriving on site,” says Pedersen.  “It was a collaborative effort between WorldStage and a number of Spinifex offices around the world.”

“Lars and the WorldStage guys were great to work with,” says Lang Walker, Technical Director at Spinifex.  “There was tight coordination between WorldStage, the disguise operators and our 3D team, and the result was an amazing job!”

At WorldStage Peter Smith and Carson Polan-Volpe were the Project Managers, Michael Kohler and Patrick Angle the disguise programmers, and Denis Alfonso and Juan Mateo the Projectionists.

Joe Kleimanhttp://wwww.themedreality.com
Raised in San Diego on theme parks, zoos, and IMAX films, InPark's Senior Correspondent Joe Kleiman would expand his childhood loves into two decades as a projectionist and theater director within the giant screen industry. In addition to his work in commercial and museum operations, Joe has volunteered his time to animal husbandry at leading facilities in California and Texas and has played a leading management role for a number of performing arts companies. Joe previously served as News Editor and has remained a contributing author to InPark Magazine since 2011. HIs writing has also appeared in Sound & Communications, LF Examiner, Jim Hill Media, The Planetarian, Behind the Thrills, and MiceChat His blog, ThemedReality.com takes an unconventional look at the attractions industry. Follow on twitter @ThemesRenewed Joe lives in Sacramento, California with his wife, dog, and a ghost.
Share
Facebook
Twitter
Linkedin
Email
Print
WhatsApp
Pinterest
ReddIt
Tumblr
Previous article
SeaWorld Orlando Announces First Details for Sesame Street Themed Land
Next article
Electrosonic Brings Bible’s Impact to Life at Museum of the Bible