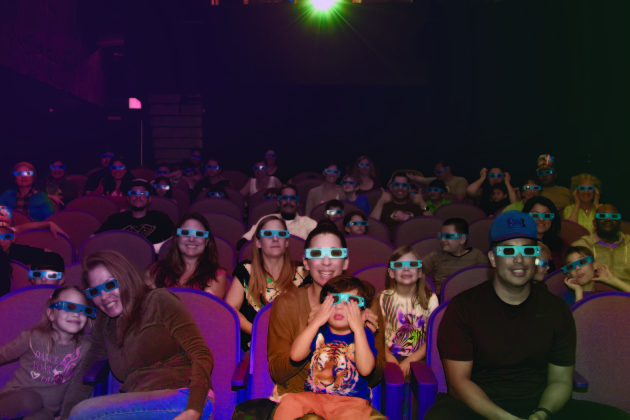 [dropcap color=”#888″ type=”square”]W[/dropcap]hen the management of the Discovery Cube, the interactive science museum in Santa Ana, California, took on the challenge of converting an uncompleted children’s museum into its new Los Angeles campus, one of the challenges it faced was turning a small space that had originally been designed as a black box theater for live performance into a 4D cinema, combining 3D digital projection with in-theater effects.

As the audiovisual system provider, Edwards Technologies Inc. (ETI) sought a solution that would be simultaneously simple and elegant, powerful and user-friendly. At its heart is the Apple Mac Pro – a cylindrical computer 10 inches tall, 6½ inches wide, and weighing just 11 pounds. As David Skoog, ETI’s Project Engineer on the theater points out, “We pioneered a way to condense everything into a computer that small.”

With the Mac Pro as a central processor, large racks of equipment were no longer needed for the 4D Theater’s systems. At Discovery Cube LA, this made it easy to transition what had originally been designed as a lighting and sound control booth with limited space for running live shows, into a projection booth with room to move around.

Even though it’s a 4D cinema, there is no need for a projectionist in the booth. The entire theater operates with ETI’s innovative Videro platform, a cloud-based system currently in use in retail, hospitality, and attractions operations worldwide. Brian Edwards, founder of ETI, said “What we’ve done with this theater is a radically different approach to 4D cinema.”

The Mac Pro interfaces through Videro to the theater operator, distributor, and ETI’s remote monitoring facilities, which operate 24 hours per day, 365 days per year. The theater features nWave iContent films, a format that enables the entire nWave library to be stored in high definition on the Mac Pro, with new titles downloadable through Videro.

One of the advantages of nWave iContent, according to Janine Baker, Senior Vice President at nWave Pictures Distribution, is the ease of uploading and downloading content. “The films are loaded with encrypted software into the Mac Pro and we can easily lock and unlock the films per the terms we negotiate with our clients.” 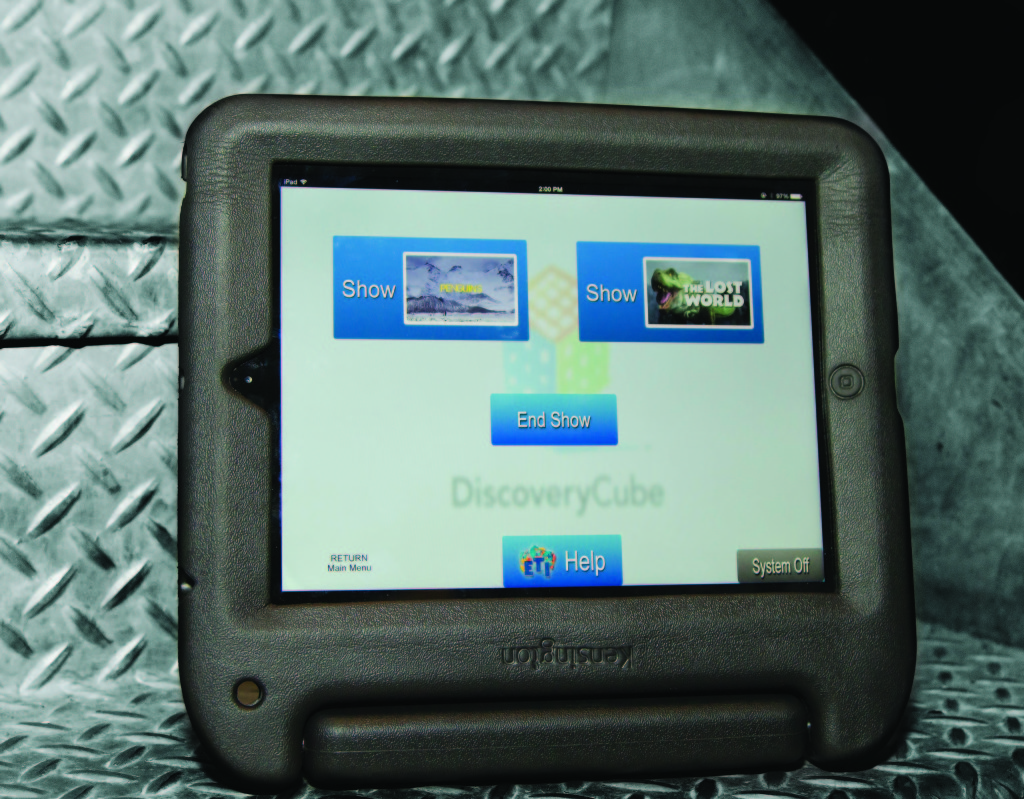 Exhibitors have easy access to and control of the 4D Theater system through computers and handheld Apple devices, such as the iPad. Ms. Baker points out that an advantage to exhibitors is that they can “go through the app and see what’s on the screen at any time and know what’s going on in the theater.” Theater control is also offered through a simple iPad interface, making operation easy for any member of the museum’s staff.

Other system components, such as the Medialon show control system used for in-theater effects, the Dante 7.1 audio system, and the left- and right-eye feeds for the 3D projector, are all fed through and controlled by the Mac Pro through individual ports.

The system is designed to be compatible with any projection system. For Discovery Cube’s 70-seat 4D Theater, ETI specified the NC1100L projector from NEC. According to Richard McPherson, Senior Product Manager for NEC, this DCI-compliant (meaning it’s ready and certified to project first-run Hollywood films) laser-phosphor projector was designed for the vast majority of theaters with smaller auditoriums: “There’s little to no maintenance needed, the projector provides consistent levels of color and brightness, and this is the only DCI-compliant laser phosphor projector on the market.” 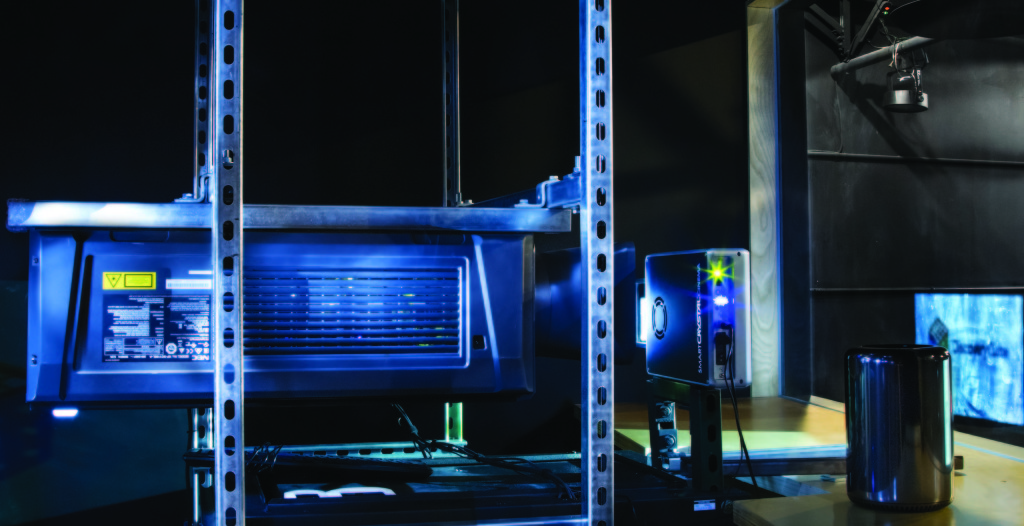 The projector maintains a steady brightness level internally and because of multiple laser diodes installed, if one goes down, the system will compensate. Because of the use of laser light projection, the unit can operate up to 20,000 hours and does not require any bulb changes as with traditional film or digital projectors. Additionally, being a laser light projector, less heat is emitted. This eliminates the need for exhaust ducts, and the projector can even be hung upside down in a theater, eliminating a projection booth. 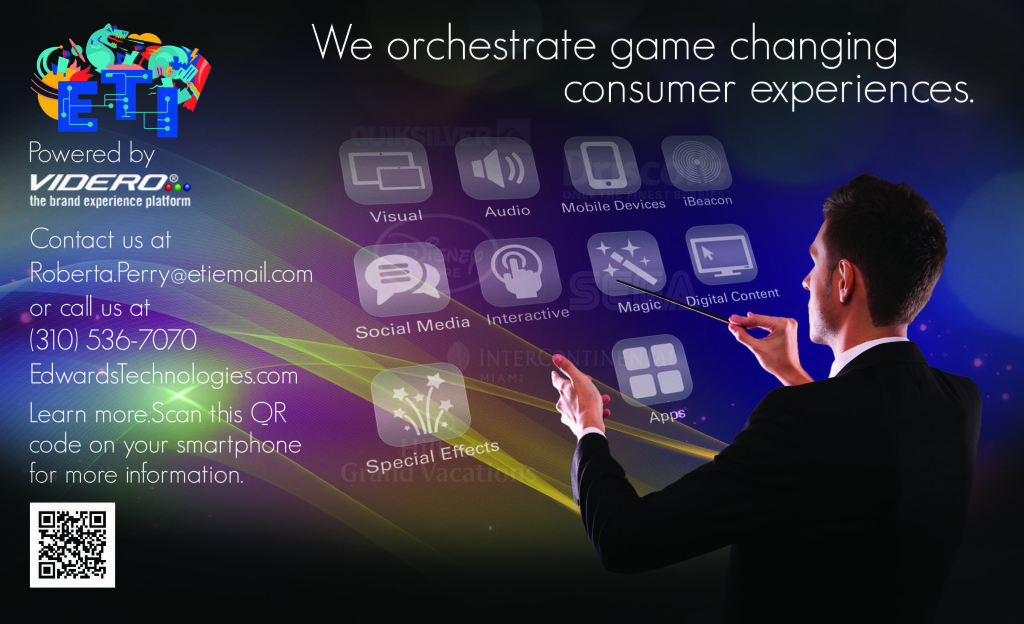 Auxiliary video can be played via a Crestron switcher attached directly to the projector. Potential media sources include Blu-ray, and high definition internet services streaming over Apple TV. Laptops can also be wired into the system through a connection in the theater or can transmit via Apple TV’s AirPlay feature. iPads and iPhones can also transmit or mirror content on the theater’s screen in the same fashion. All auxiliary features can be controlled via the same simple iPad interface used for 4D programs. 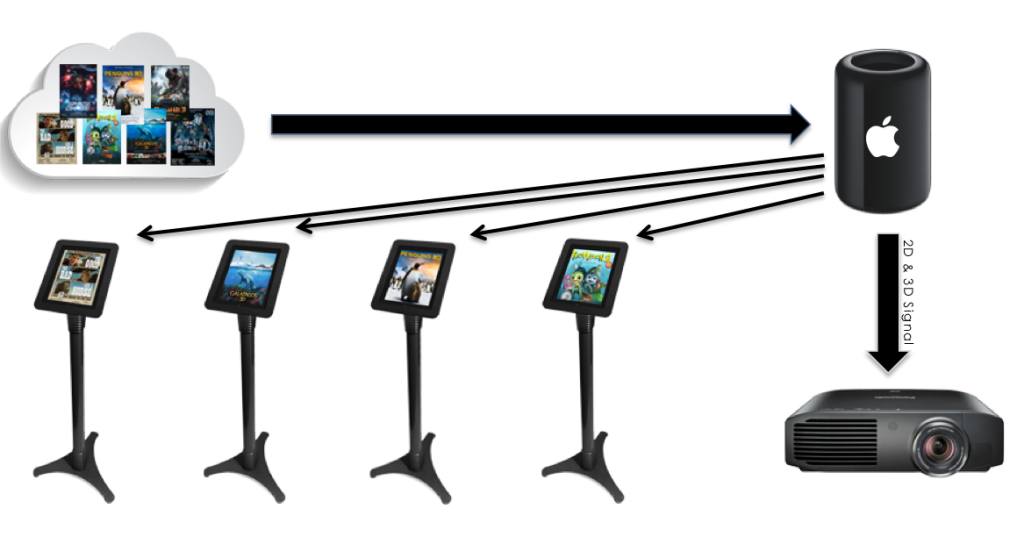 A unique feature in development for future theaters that takes advantage of Apple technology and the Videro cloud is the nWave iContent preshow. nWave Pictures develops a number of interactive games to accompany its educational films. According to Ms. Baker, “In the past, we’ve seen iPads with games at venues, but since they’re running on the iPads themselves, if something happens, you’re down a unit. With this system, the games will be streamed in real time to the iPads, which can be set up in the queue area, from the Mac Pro, and they’ll be monitored by ETI from their control system, so if something’s going wrong with an iPad, they usually will know in advance.”

Baker finds the same advantage in the 4D systems that ETI provides its clients. “I love the 24-hour service. If something happens in the theater, you don’t have to wait days for the hardware people to show up. Sometimes, ETI will know before the client does if something’s wrong with the system, and they are able to fix it immediately.”

The package seems well-suited to Discovery Cube as a science museum that looks to engage audiences with educational and entertaining content on modern platforms. “When we were thinking about a 4D theater, we knew we wanted the latest and greatest,” says Joe Adams, CEO of Discovery Cube. “When we saw what ETI had to offer, we knew we had found it.”

nWave Pictures has long been a fixture in the attraction and museum film industries. Founded by Ben Stassen, a graduate of the USC School of Film and Television, nWave began by producing computer animated films for ride simulators in the early 1990s. The company later entered into giant screen distribution, building a library of original titles such as “3D Mania” and “Haunted Castle” and also distributing films from other producers.

With the company background in specialty cinema for entertainment and education markets, and the increasing number of digital 3D/4D theaters in museums and attractions, it was a natural step for nWave Pictures Distribution, headed by Janine Baker, to expand its offerings, making all of the company’s content – giant screen films, attraction films in 3D and 4D, and ride films – available to operators through the nWave iCloud.

nWave’s strategy for museums, zoos, and aquariums has proven very successful. “We try to program both a film that parents can watch with very young children, along with a more adventuresome film for teenagers,” says Baker. At Discovery Cube LA, the playlist is currently split between “Lost World 3D” – a computer animated adventure from British animation house Red Star – and “Penguins 3D” from Atlantic Productions. 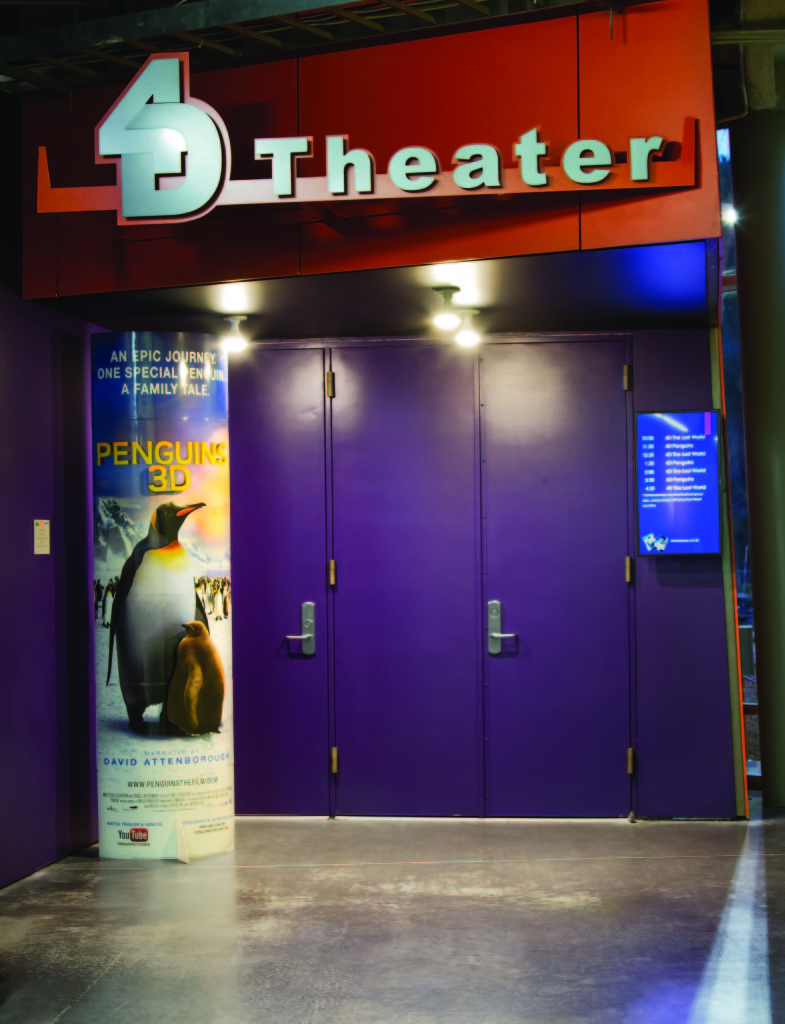 Jennifer Lee Hackett, formerly of the Smithsonian and National Geographic Cinema Ventures, is nWave Pictures’ new Director of Sales and Distribution for the Americas. Eric Dillens, Chairman of nWave Studios, said, “In our efforts to expand our sales reach across multiple exhibition platforms, Jennifer brings a unique perspective, having served as both a buyer and seller of filmed content in the commercial and institutional markets.”

For seven years, a $21.8 million building sat vacant at Hansen Dam, some 20 miles north of downtown LA.  The building had been constructed as a partnership between the city and the Los Angeles Children’s Museum, which had planned to move there from its downtown location. Although the city paid for and constructed the building, the Children’s Museum Foundation was unable to secure funding for the exhibits and operation of the new location. 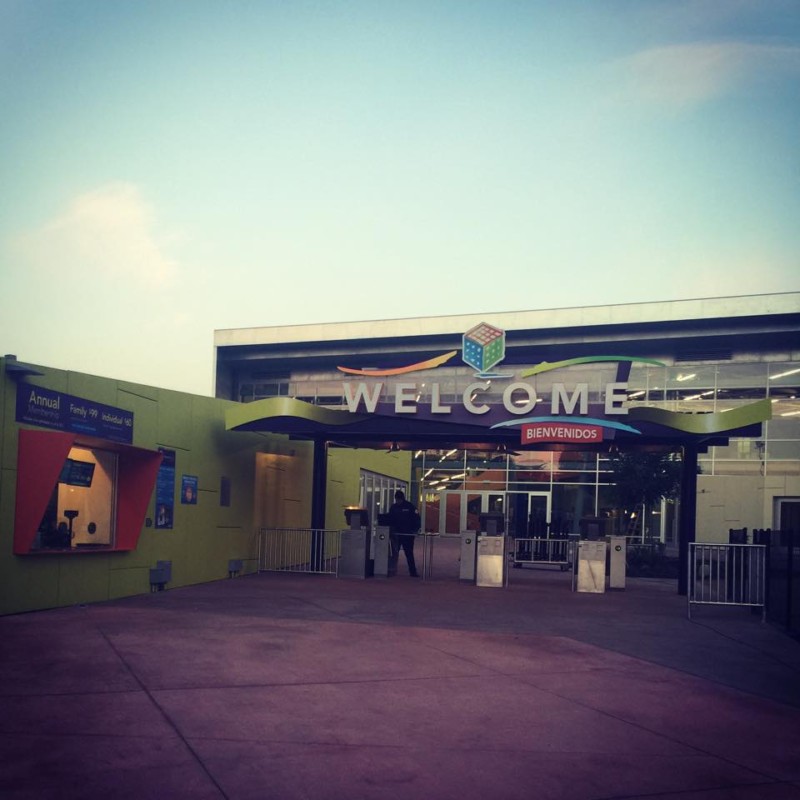 Discovery Cube LA was born when the city approached Discovery Cube, operator of an established, successful children’s science center in Santa Ana, just south of Disneyland. Under the guidance of Joe Adams, a former Disney executive, the Santa Ana campus is currently in the midst of a three-phase redevelopment and expansion that will see its size and offerings dramatically increase.

For the Los Angeles location, Adams instituted a number of layout changes to optimize operations. This included moving the ticketing booth outside, and enlarging the gift shop. “People like to take their time and browse,” said Adams.

According to Adams, 20% of the exhibits at Discovery Cube LA are duplicates of ones at the Santa Ana campus, while the remaining 80% are original to the new museum. In addition to ETI, Discovery Cube brought in leading museum and attraction designers and fabricators to create and build exhibits for Discovery Cube LA, including Lexington, Mad Systems, Cinnabar, and BaAM Productions.

From their respective locations, the two museums are able to attract and serve visitors from all of Los Angeles and Orange County, along with portions of surrounding counties. Since opening in October 2014, attendance has been excellent, according to Adams, and the future looks promising.

Joe Kleimanhttp://wwww.themedreality.com
Raised in San Diego on theme parks, zoos, and IMAX films, Joe Kleiman would expand his childhood loves into two decades as a projectionist and theater director within the giant screen industry. In addition to his work in commercial and museum operations, Joe has volunteered his time to animal husbandry at leading facilities in California and Texas and has played a leading management role for a number of performing arts companies. Joe has been News Editor and contributing author to InPark Magazine since 2011. HIs writing has also appeared in Sound & Communications, LF Examiner, Jim Hill Media, and MiceChat. His blog, ThemedReality.com takes an unconventional look at the attractions industry. Follow on twitter @ThemesRenewed Joe lives in Sacramento, California with his fiancé, two dogs, and a ghost.
Share
Facebook
Twitter
Linkedin
Email
Print
WhatsApp
Pinterest
ReddIt
Tumblr
Previous articleSheikh Mohammed Announces “Museum of the Future” for Dubai
Next articleAAM and Center for the Future of Museums Release TrendsWatch 2015 as Free Download