Sheikh Mohammed Announces “Museum of the Future” for Dubai 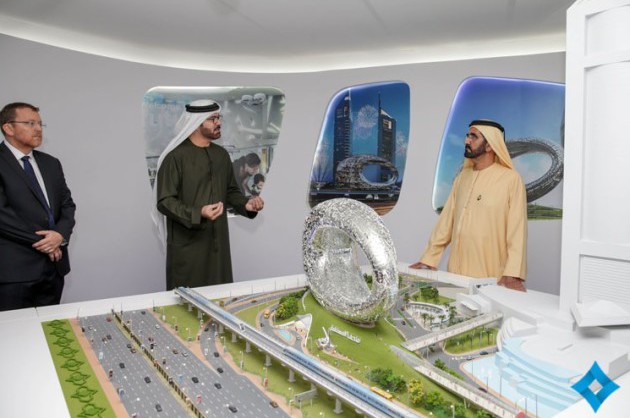 Dubai, UAE — UAE Vice President, Prime Minister and Ruler of Dubai His Highness Sheikh Mohammed bin Rashid Al Maktoum has launched the “Museum of the Future” project that will include innovation labs in healthcare, education, smart cities, energy, transportation in addition to a museum for prototypes. The museum is also expected to produce futuristic inventions and support the UAE’s mission to be a global innovation hub. The iconic museum will open in 2017.

Located adjacent to Emirates Towers, the Museum will encompass 3D printing into its construction process.

Speaking at the launch ceremony, His Highness Sheikh Mohammed bin Rashid Al Maktoum said: “The future belongs to those who can imagine it, design it, and execute it. Here in the UAE we think differently. While others try to predict the future, we create it”.

Sheikh Mohammed added: “The world is entering a new era of accelerated knowledge and great technological revolutions. We aim to lead in that era, not to follow and lag behind. The Museum of the Future is the first step of many to come, marking the beginning of great achievements”.

His Highness concluded: “The President, His Highness Sheikh Khalifa bin Zayed Al Nahyan, has declared 2015 to be the year of innovation in the UAE. Today we show how serious and committed we are to that mission by turning the UAE into a major international destination for innovators”.

The museum’s motto, “See the future, create the future”, reflects a new approach to government innovation. Rather than just displaying exhibits or publishing reports, the new institution will use design, technology prototyping and foresight to create real examples of change. The Museum is the first of its kind, and represents a leading example of entrepreneurial governments embracing change and creating futuristic visions for a better world.

The Museum will host a group of innovation labs focusing on health, education, smart cities, energy and transport in addition to a permanent section on future innovations in all fields. It will provide a platform to demonstrate and test the latest inventions from world-leading tech giants and up-and-coming start-ups, as well as collaborations between companies and leading research institutes and universities.

The creation of the museum reflects Sheikh Mohammed’s vision that a new approach is required for fast-moving, dynamic, and uncertain times in order to create long-lasting innovations that benefit both organizations and society.

Once fully functioning, the Museum will become a major centre for anticipating future trends in all scientific and technological fields, collaborating with governments from all over the world to develop solutions for their current and future work and service challenges.

Joe Kleimanhttp://wwww.themedreality.com
Raised in San Diego on theme parks, zoos, and IMAX films, InPark's Senior Correspondent Joe Kleiman would expand his childhood loves into two decades as a projectionist and theater director within the giant screen industry. In addition to his work in commercial and museum operations, Joe has volunteered his time to animal husbandry at leading facilities in California and Texas and has played a leading management role for a number of performing arts companies. Joe previously served as News Editor and has remained a contributing author to InPark Magazine since 2011. HIs writing has also appeared in Sound & Communications, LF Examiner, Jim Hill Media, The Planetarian, Behind the Thrills, and MiceChat His blog, ThemedReality.com takes an unconventional look at the attractions industry. Follow on twitter @ThemesRenewed Joe lives in Sacramento, California with his wife, dog, and a ghost.
Share
Facebook
Twitter
Linkedin
Email
Print
WhatsApp
Pinterest
ReddIt
Tumblr
Previous articleUS Thrill Rides Proposes 32 Story Observation Tower and Gondola Ride for New Orleans Waterfront
Next articleBig Experience: Small Package — ETI’s elegant 4D solution powers Discovery Cube LA theater