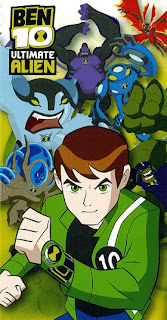 In a move that will delight tens of thousands of youngsters, Europe’s first ever Ben 10 roller coaster ride will open at Drayton Manor for Easter 2011, following an exclusive deal between the park and Turner CN Enterprises, the brand’s licensor.

Ben 10 is a hugely popular children’s programme, broadcast on Cartoon Network, which follows the adventures of 10-year-old Ben Tennyson, who is able to turn into a variety of alien superheroes, each with unique powers, thanks to his mysterious Omnitrix watch.

The exciting new roller coaster will be part of an amazing Cartoon Network Street, which will include a fully branded restaurant and shop, selling Ben 10 merchandise and products relating to other shows on Cartoon Network.

Children and their parents will get to revel in the world of Ben 10 even before they get on the ride with queue entertainment. Full details of the ride will be unveiled closer to the launch.

Colin Bryan, Managing Director of Drayton Manor Theme Park, said: “Drayton Manor has a reputation for firsts. We opened Europe’s first Thomas Land£ in 2008, and we have Europe’s first stand up rollercoaster (Shockwave), as well as the world’s first stand up tower drop ride (Apocalypse). “Drayton Manor first opened to the public in 1950. Over the past 61 years we have always invested in first class rides and attractions to ensure our visitors have the best possible day out. This is why I am confident that this new Ben 10 themed rollercoaster will be an amazing and popular addition to the park.”


Turner CN Enterprises’ UK Licensing Director Graham Saltmarsh said: “We’re thrilled to be launching a Ben 10 roller coaster ride in the UK, which quite literally is set to take the brand to new heights!  It’s very much in line with the action and excitement that fans associate with their hero and a fantastic profile-raising event, which enables us to create another touch point for Ben 10 fans to interact with their favourite character.”

Judith Rubin
Judith Rubin ([email protected]) is a leading journalist, publicist, strategist, blogger, content marketing specialist and connector in the international attractions industry. She excels at writing about all aspects of design and technical design, production and project management. Areas of special interest include AV integration and show control, lighting design and acoustics, specialty cinema, digital video and world’s fairs. Judith has ties to numerous industry organizations. From 2005-2020 she ran communications, publications and social media for the Themed Entertainment Association (TEA). In 2013, she was honored with the TEA Service Award. She was development director of IMERSA, and co-chair of the 2014 IMERSA Summit. She was publicist for the Large Format Cinema Association in the 1990s, now part of the Giant Screen Cinema Association (GSCA) and has also contributed to the publications of PLASA, IAAPA and the International Planetarium Society. Already making her mark as a magazine and book editor, Judith joined World’s Fair magazine in 1987, which introduced her to the attractions industry. Launching as a freelancer in the mid 1990s she has contributed to dozens of publications and media outlets including Funworld, Lighting&Sound America, Sound & Communications, Urban Land, The Raconteur and The Planetarian. She joined InPark in 2010. Judith earned a Bachelor of Fine Arts from Pratt Institute. She has lived in New York City and the San Francisco Bay Area, and now makes her home in Saint Louis, where she is active in the local arts and theater community.
Share
Facebook
Twitter
Linkedin
Email
Print
WhatsApp
Pinterest
ReddIt
Tumblr
Previous articleMuseum of Science, Boston, to Reopen Charles Hayden Planetarium
Next articleTop Five IPM News Stories for 2010

Gateway Galaxy to Handle All Ticketing at Drayton Manor