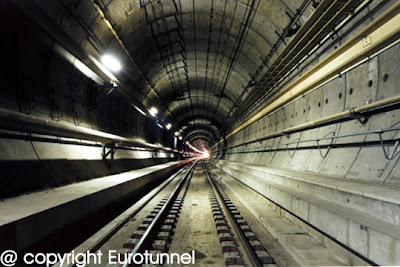 Paris, France (March 6, 2012) /BUSINESS WIRE/ — In line with its ambition to innovate and to improve customer service, Eurotunnel, in partnership with French mobile operators, will install a 2G (GSM 900,DCS1800) and 3G (UMTS 2100) GSM-P telephone system which will allow Le Shuttle and high speed passenger train customers to use their mobile telephones inside the Channel Tunnel, in time for the Olympic Games.

Offering a wi-fi service 100 metres below sea level, to the almost 20 million customers who travel through the 53km of the Channel Tunnel every year is a world first.

The installation, which will cost of €14 million, has been made possible by the signature of an agreement, today 06 March 2012, at the French Ministry for the Economy, Finance and Industry by Eurotunnel and the telecoms operators in France, Bouygues Telecom, Orange SFR and Free1.

The installation of this additional, mobile telecommunications service has been made possible as Eurotunnel is already in the process of installing the latest version of GSM-R2 railway signaling equipment. The choice of the same equipment supplier for both GSM-P and GSM-R, Alcatel-Lucent, will ensure the compatibility of the infrastructure and enable costs to be controlled whilst accelerating the installation. The French operators will provide an extension of their 2G/3G coverage through the South running tunnel (running France-UK) via a transmitter cable and optical repeaters positioned every 750 metres. The North running tunnel (UK-France) will be covered by British operators after the Olympic Games.

Eric Besson, the French Government minister responsible for the Digital Economy stated: “This agreement means that from now on customers travelling through the Channel Tunnel will be able to use the full range of 2G and 3G mobile communication services. I am delighted with this achievement. I would like to thank Eurotunnel for their initiative, the major French mobile operators for their enthusiasm and Alcatel-Lucent for their savoir-faire in delivering the technical solution.”

Jacques Gounon, Chairman and Chief Executive Officer of Eurotunnel stated: Eurotunnel, the vital link between the UK and France, is proud to commit to this investment which will enable the connection of peoples, nations and cultures in this time of instant communications. Eurotunnel is sure that enabling mobile communications from below the waves will be an attraction for many customers.”

Joe Kleimanhttp://wwww.themedreality.com
Raised in San Diego on theme parks, zoos, and IMAX films, InPark's Senior Correspondent Joe Kleiman would expand his childhood loves into two decades as a projectionist and theater director within the giant screen industry. In addition to his work in commercial and museum operations, Joe has volunteered his time to animal husbandry at leading facilities in California and Texas and has played a leading management role for a number of performing arts companies. Joe previously served as News Editor and has remained a contributing author to InPark Magazine since 2011. HIs writing has also appeared in Sound & Communications, LF Examiner, Jim Hill Media, The Planetarian, Behind the Thrills, and MiceChat His blog, ThemedReality.com takes an unconventional look at the attractions industry. Follow on twitter @ThemesRenewed Joe lives in Sacramento, California with his wife, dog, and a ghost.
Share
Facebook
Twitter
Linkedin
Email
Print
WhatsApp
Pinterest
ReddIt
Tumblr
Previous articleDollywood Raises $37,000 For Eagle Rehabilitiation With Wild Eagle Ride Auction
Next articleNew Exploratorium Location on San Francisco’s Historic Waterfront On Target for 2013 Opening