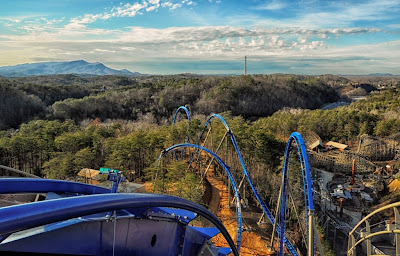 Headquartered at Dollywood, the AEF rehabilitates and breeds birds of prey under permits from the U.S. Fish & Wildlife Service and The Tennessee Wildlife Resources Agency. Dollywood is home to Eagle Mountain Sanctuary, a 30,000-square-foot aviary which is maintained by the AEF and houses the country’s largest presentation of non-releasable bald eagles.

Wild Eagle’s innovative floorless design allows riders to experience the sensation of flight. Riders are seated four abreast in a forward-facing position, with two riders seated on the “wings” along either side of the coaster’s track with nothing but air above and below them.

Perched on the park’s highest peak, Wild Eagle rises 21 stories into the sky. Taking off from the Wilderness Pass area, riders travel the coaster’s massive 3,127-foot track as it dives, drops, twists and turns. Traversing the mountainous terrain, Wild Eagle reaches a top speed of 61 miles per hour and maneuvers four inversions including a giant loop, a “zero-G” roll, and a giant flat spin.

Joe Kleimanhttp://wwww.themedreality.com
Raised in San Diego on theme parks, zoos, and IMAX films, InPark's Senior Correspondent Joe Kleiman would expand his childhood loves into two decades as a projectionist and theater director within the giant screen industry. In addition to his work in commercial and museum operations, Joe has volunteered his time to animal husbandry at leading facilities in California and Texas and has played a leading management role for a number of performing arts companies. Joe previously served as News Editor and has remained a contributing author to InPark Magazine since 2011. HIs writing has also appeared in Sound & Communications, LF Examiner, Jim Hill Media, The Planetarian, Behind the Thrills, and MiceChat His blog, ThemedReality.com takes an unconventional look at the attractions industry. Follow on twitter @ThemesRenewed Joe lives in Sacramento, California with his wife, dog, and a ghost.
Share
Facebook
Twitter
Linkedin
Email
Print
WhatsApp
Pinterest
ReddIt
Tumblr
Previous article
Carnival Cruise Line’s Carnival Destiny to Undergo $155 Million Makeover and Expansion
Next article
Eurotunnel to Offer Cell Service in Channel Tunnel For Passengers Headed to London Olympic Games