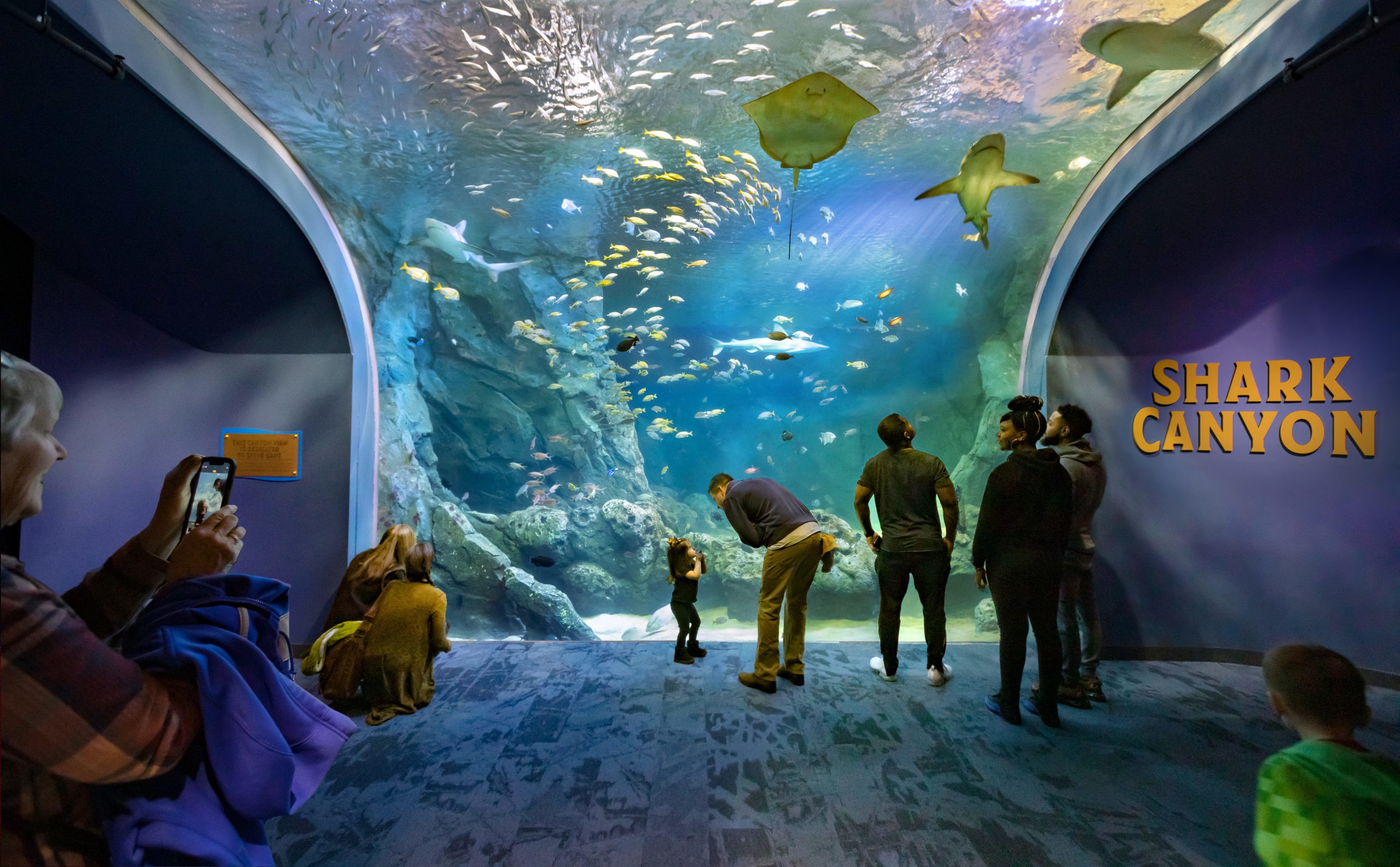 ABOVE: The St. Louis Aquarium at Union Station. Photo courtesy of EXP.

Aquariums are fascinating. They have their own unique and distinguishing characteristics, aquatic specifics and hidden stories. Visitors to aquariums are mesmerized by marine life and their designed environments. For our part at EXP – as mechanical, electrical and plumbing (MEP) engineers – we are fascinated by constructing the building systems of aquariums to host the animals and protecting their safety outside their natural habitat.

Part of a downtown revival

In January 2020, the St. Louis Aquarium at Union Station opened to the public as the centerpiece of a $187 million family entertainment complex at the historic train terminal. St. Louis Union Station began train operations in 1894; in the early 1900s was one of the busiest passenger terminals in the country, and ceased train operations in 1978. It now joins a number of celebrated developments expanding and upgrading the leisure options in downtown St. Louis – including the St. Louis Arch, the National Blues Museum and Ballpark Village. St. Louis based Lodging Hospitality Management (LHM) acquired and has been renovating the Union Station property for several years; in 2014 its indoor projection mapping show, the Grand Hall Experience, was recognized with a TEA Thea Award.

Due to the pandemic, the new St. Louis Aquarium was obliged to temporarily close in early 2020, as were many venues around the country, but re-opened in June and is currently operating with timed ticketing and new protocols in place.

Designed by PGAV Destinations, the new, 120,000-square-foot St. Louis Aquarium is home to more than 13,000 animals and celebrates regional history and local river culture. PGAV Destinations designed the new Aquarium to celebrate St. Louis’s past and present, showcasing the city’s global impact via the nearby Missouri and Mississippi Rivers. Visually rooting the visitor experience at the Aquarium in early train travel, the journey transports visitors to the Mississippi to learn more about the animals found in St. Louis, then heads downriver to see unique creatures from around the world’s waterways and oceans.  A simulated train ride takes guests to the confluence of the Mississippi and Missouri rivers narrated by St. Louis native and actor John Goodman.

Our team at EXP was proud to have joined PGAV Destinations in this achievement, having provided the MEP, fire protection and low voltage design services for this renovation of historic Union Station.

We joined PGAV’s team early in the design process and were briefed on the story they envisioned and the historical elements to dictate the structure of the new experience. We brought our prior experience on other world-class animal and aquatic attractions, including Georgia Aquarium, Ripley Entertainment and SeaWorld.

When people think of aquariums, we certainly hope they do not think about fire protection, mechanical, electrical or plumbing systems. Mostly invisible to the guest, these are integral services to ensure their protection and the protection of the marine species housed in the facility. Our teams have gained a strong foothold in the industry as MEP leaders. This role is our home base, where we excel for our clients and deliver world-class solutions. As a multidisciplinary engineering firm with over 3,500 employees across North America, 75 of whom are dedicated to entertainment, we know our way around an aquarium and MEP systems are foundational elements to the success of a project, whether an aquarium, theme park or other visitor attraction. Our role is to deliver these services to enhance the end-goal – the guest experience. No one wants a “fishy” situation.

At the St. Louis Aquarium at Union Station, the MEP systems and fire protection required more intricacy than a typical building project – and resulted in a large, complex scope. For the St. Louis Aquarium, we would be responsible for systems that managed more than one million gallons of water.

With every highly themed environment we work in a big part of our role is to support the story.  Sometimes we support the story by playing an active part where our systems are front and center.  More often, we best support the story by integrating our systems into theming and rockwork. In the new aquarium, our close relationship with PGAV Destinations helped to establish a ‘hide and seek’ of systems and ensure we were up-to-code with every element. In addition, the combined expertise supported triple checking the minimal risk to aquatic life.

Aquariums are fascinating design achievements. They are the combination of interacting MEP systems, Aquatic Life Support Systems, multidisciplinary design and construction achievements and creativity. The St. Louis Aquarium puts versatility and innovation on full display, along with 13,000 animals. We were extremely proud to have been on the team to make this come to life.

With a mission to understand, innovate, partner and deliver, EXP provides engineering, architecture, design and consulting services to the world’s built and natural environments. Today, thousands of EXP professionals across North America provide the passion and experience needed to deliver successful projects around the world. For more information, visit www.exp.com.