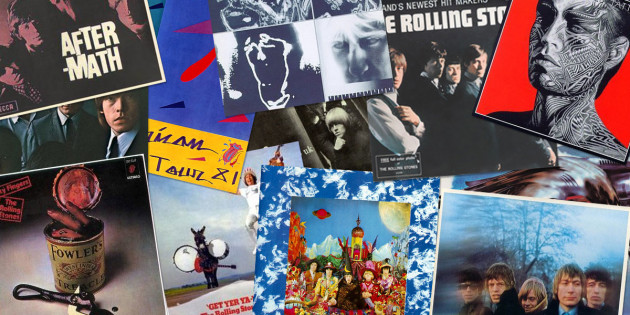 London, UK (July 1, 2015) — The Rolling Stones will stage their first ever major exhibition at London’s prestigious Saatchi Gallery, opening to the public on April 6 2016 until September 2016.  EXHIBITIONISM will be the most comprehensive and immersive insight into a group described by critics as ‘The Greatest Rock ‘n’ Roll Band’, taking over nine themed galleries spread across two entire floors at the prestigious Saatchi Gallery in London. Tickets for EXHIBITIONISM go on sale to the public next week on Friday 10 July 2015 at 9am via www.stonesexhibitionism.com and 10am from Saatchi Gallery.

As well as over five hundred Rolling Stones important and unseen artifacts from the band’s personal archives, the exhibition will take the public through the band’s fascinating fifty year history, embracing all aspects of art & design, film, video, fashion, performance, and rare sound archives. At the heart of the exhibition is of course the Stones musical heritage that took the group from being a hard working London blues band in the early 1960’s to becoming inspirational cultural icons adored by millions.

DHL is proud to be the Presenting Partner of EXHIBITIONISM – The Rolling Stones first ever global touring exhibition.

Over five decades the Stones have shaped popular culture, often in their own image, and this exhibition will look back through every facet of the band’s career to offer a unique perspective that only the bands own archive can provide. EXHIBITIONISM will be the largest touring experience of this kind ever to be staged by a band or artist, and continues the proud tradition by the band of groundbreaking innovation combined with the highest production values.

EXHIBITIONISM has taken three years of meticulous planning and will offer a comprehensive insight into the band in a way that has never before been attempted.  The exhibition is an interactive tour through the band’s vast artistic oeuvre, and includes original stage designs, dressing room and backstage paraphernalia; rare guitars and instruments, iconic costumes, rare audio tracks and unseen video clips; personal diaries and correspondence; original poster and album cover artwork, and unique cinematic presentations.  Collaborations and work by the vast array of artists, designers, musicians and writers will be included in the exhibition – from Andy Warhol, Shepard Fairey, Alexander McQueen, and Ossie Clark to Tom Stoppard and Martin Scorsese.

Mick Jagger commented, “We’ve been thinking about this for quite a long time but we wanted it to be just right and on a large scale. The process has been like planning our touring concert productions and I think that right now it’s an interesting time to do it.”

Keith Richards commented, “While this is about The Rolling Stones, it’s not necessarily only just about the members of the band. It’s also about all the paraphernalia and technology associated with a group like us, and it’s this, as well as the instruments that have passed through our hands over the years, that should make the exhibition really interesting.”

Ronnie Wood said, “The scene was great down the King’s Road in the 1960’s. That was where you went to hang out to watch the fashions go by. So it is appropriate that our EXHIBITIONISM will be housed at the wonderful Saatchi Gallery.”

Charlie Watts added – ‘’It’s hard to believe that it’s more than fifty years since we began and it is wonderful to look back to the start of our careers and bring everything up to date at this exhibition.’’

Gordon Innes, CEO London & Partners, the Mayor’s official promotional company for London said, “It’s fantastic that London is set to host the world’s first international exhibition celebrating what is arguably the world’s greatest Rock and Roll band. The Stones are synonymous with London and what better setting than the Saatchi gallery to bring the band’s incredible journey to life.”

EXHIBITIONISM is promoted and presented by Australian company iEC (International Entertainment Consulting) with the full participation of Mick Jagger, Keith Richards, Charlie Watts and Ronnie Wood. The immersive exhibition will use nine different rooms spanning over 1,750 square meters, each with its own distinctly designed environment, that will show how the band has changed the way we experience rock and roll.

The exhibition will start with an introductory ‘Experience’, giving visitors a look back at the high points of the band’s career through a new film, with a high-octane soundtrack. It will then be all the way back to the band’s beginnings and take you on a remarkable journey that made them the Greatest Rock n Roll Band in the World

Tickets for the exhibition will go on sale to the general public on Friday 10 July 2015 at 9am via www.stonesexhibitionism.com or 10am at Saatchi Gallery. It is planned that following the London exhibition,EXHIBITIONISM will visit eleven other global Cities around the world over a four year period. The international tour will be proudly presented by DHL. Visit www.stonesexhibitionism.com for more information.

Joe Kleimanhttp://wwww.themedreality.com
Raised in San Diego on theme parks, zoos, and IMAX films, InPark's Senior Correspondent Joe Kleiman would expand his childhood loves into two decades as a projectionist and theater director within the giant screen industry. In addition to his work in commercial and museum operations, Joe has volunteered his time to animal husbandry at leading facilities in California and Texas and has played a leading management role for a number of performing arts companies. Joe previously served as News Editor and has remained a contributing author to InPark Magazine since 2011. HIs writing has also appeared in Sound & Communications, LF Examiner, Jim Hill Media, The Planetarian, Behind the Thrills, and MiceChat His blog, ThemedReality.com takes an unconventional look at the attractions industry. Follow on twitter @ThemesRenewed Joe lives in Sacramento, California with his wife, dog, and a ghost.
Share
Facebook
Twitter
Linkedin
Email
Print
WhatsApp
Pinterest
ReddIt
Tumblr
Previous articleMohegan Tribe and Incheon International Airport Announce Long Anticipated Casino Resort
Next articleHettema Group Reaches New Heights With Opening of One World Observatory