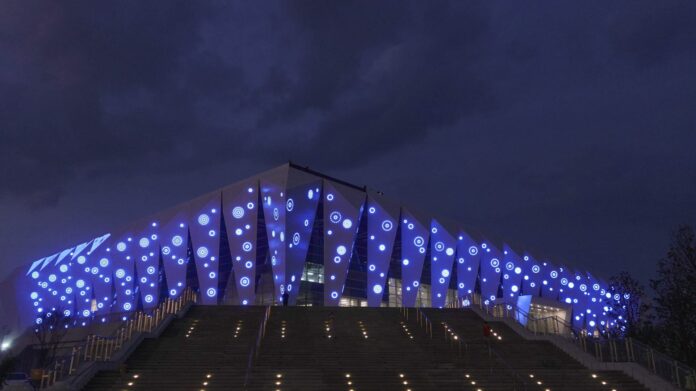 As the largest sports venue in the Shaanxi Province of Northwest China, the Xi’an Olympic Centre Stadium is due to host the opening ceremony and track and field competitions for China’s 14th National Games in September.

With an immense size of 866,667 square meters (9.3 million square feet), the newly built venue boasts three main zones: the stadium, with 60,000 seats; the gymnasium with 18,000; and the natatorium with 4,000. A venue of this size required a colossal audio system that could meet the ambitious needs of the stadium throughout the upcoming National Games and beyond. The responsibility of designing a high-quality audio system spanning across these three zones was given to Powersoft’s Chinese distributor EZPro.

“The brief we were given was to create a world class audio system, that was advanced, stable, cost effective and flexible,” commented Yongjun Jiang, EZPro’s technical manager for the project. “With the system working as an entertainment, vocal and emergency audio system, it was vital we used the best in the business to create the most reliable and impactful system possible. For us, this meant using top brands with the best technology on the market, including Powersoft.”

“Speech comprehension was the most significant aspect of the audio requirements, with the upcoming games and competitions held in the venue relying heavily on commentary,” explained Yongjun Jiang. “The stadium and natatorium adopt a distributed layout to ensure coverage to all the seats, while we opted for a more centralized lay out for the gymnasium, as it’s a smaller venue.”

The immense system is supported by ArmoníaPlus, Powersoft’s system design software which has been devised to allow for simplistic control of complicated installations. The software allowed EZPro to speed up the initial system commissioning phase, thanks to its speaker pre-set models, and has continued to be an essential part of the system control.

“The clear and intuitive user interface of ArmoníaPlus is a crucial asset to the installation for daily system operation,” said Yongjun. “The offline editing functions, quick set up and group control functions are extremely practical for the install.”

The entire installation spanned just over a year and was completed in July 2020. “Overall we were really pleased with how the installation turned out,” said Yongjun. “Everything went exactly as we planned, and the delivery and final result have been commended by the client.”

Powersoft aids in audio challenges of immersive Doctor Who experience