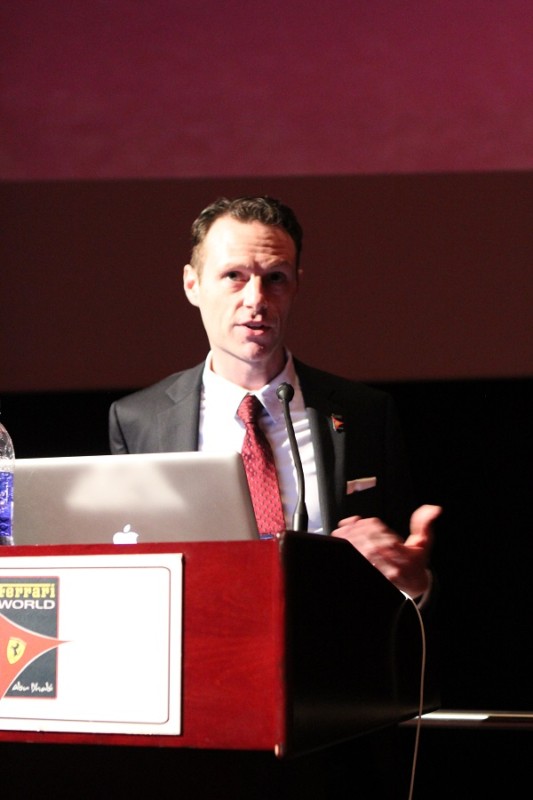 “Story Builder” George Walker, creative director for Farah Leisure Parks, the company responsible for the development of theme parks and projects on Yas Island, was interviewed by InPark co-editor Judith Rubin at the IAAPA Attractions Expo in Orlando.

You departed Los Angeles for the UAE about two years ago to join Farah Leisure as art director for Ferrari World Abu Dhabi. Tell us about your promotion and your responsibilities.

About six months in, I was named creative director – and am excited to be at the creative helm for Farah Leisure projects on Yas Island. I have been fortunate to be recognized for my hard work and for the opportunity to work with renowned brands such as Ferrari.  As part of our great project development team, it is an honor to have been given more projects and more responsibility.

Ferrari World and Yas Waterworld are Farah’s two existing leisure properties. Farah has plans to position Yas Island as a major destination resort for the region, with more projects in the near and distant future. We are all excited that more money is being invested – it is an exciting time to be in the UAE.

What brought you to the IAAPA Attractions Expo in Orlando this year?

I attended along with four others from the Farah Leisure project development team, primarily to meet with vendors. It’s an excellent opportunity to see everyone here in the same place and time zone – to see the latest and greatest products and companies both on and off the exhibit floor.

What more can you tell us about Farah Leisure’s projects and plans?

The Ferrari World expansion project will be the first one out of the gate, adding about seven new experiences and attractions, including everything from environmental enhancements to cutting edge, never-been-done-before, high tech and thrilling attractions. We already have the fastest rollercoaster, but we’re going to add a couple more “-ests” to the list. The expansion is expected to significantly increase sales and the park’s capacity. The objective is to firmly reinforce Ferrari World’s place on the global tourism map.

What is Farah Leisure’s target in terms of regional and international positioning?

There is friendly competition between Abu Dhabi and Dubai, of course, but more importantly, we recognize that our audience is the world. I am excited to be among those pioneering many theme design techniques in the region, but high caliber themed entertainment is not necessarily new to the sophisticated world travelers we are trying to attract. We look at the Disney and Universal developments, and at the great European parks in addition to our competition in Dubai. We know that we need to be able to compete in a world market to draw guests here.

What are some of the primary challenges you face in achieving those goals?

I recently gave a talk on this subject at the Dubai Hotel Show with my colleague, technical director Mike Haimson. One of the biggest challenges is conveying how to put the “magic” into the bricks and mortar. The UAE has many skilled people who have built great things, but they are more familiar with traditional construction practices. A leisure resort needs to apply the tools of entertainment in the hotels as well as the attractions – to be part of the reason people want to come back for a repeat visit.

Traditional construction involves creating something that has a basic function, such as getting from one side of a bridge to the other. With theme design, the function is emotion. And so, whether it be a themed resort or theme park, your creative/technical team is your “heart.” They understand the story, and they must be allowed to lead and drive the process. Your guests will thank you for it by keeping those turnstiles spinning.

You also need to know your audience. Just because you can build a thing, doesn’t mean it makes business sense to do so. Once you understand the business model and have identified your target audience, you can better focus on the best story you should endeavor to create.

Any advice for themed entertainment professionals who want to work in the region?

Patience and an open mind are required, because you will need to be able to both learn and teach as you go.

Tell us something about your training and background.

I graduated from USC film school. They taught me two things that I apply every single day. First, how to balance egos and ideas to get the best product out of a team. The secret is that it can’t be about your idea – it has to be about the best idea. Everyone should rally behind whoever is directing, to make that idea the best it can be.

Second, I learned how to manage the creative process. A great idea is a starting place, but there are many practical and management considerations to get the idea out of your head and into reality.

I attribute my success to the fact that I approach the creative process with build-ability at the core. I refer to myself as a “story builder” because I believe it is critical to have ideas that also meet the needs of the business, realities of budget, schedule, resources, and sometimes basic physics!

In an industry where so much is left on the design shelf, I have the benefit of having worked on many projects that reached completion. I believe that having field experiences – like those that found me covered in cement and carving rockwork on a scaffold in Anaheim, for example – has given me the ability to approach the design dialog in the boardroom with greater reality and respect for the design and construction process. I am grateful for those experiences and have seen the benefit that this knowledge has brought to the development of my projects.

I have always been interested in evolving theme design. I see a not-too-distant future where some breakthroughs are achieved and themed vacationing moves into an exciting tangential direction.