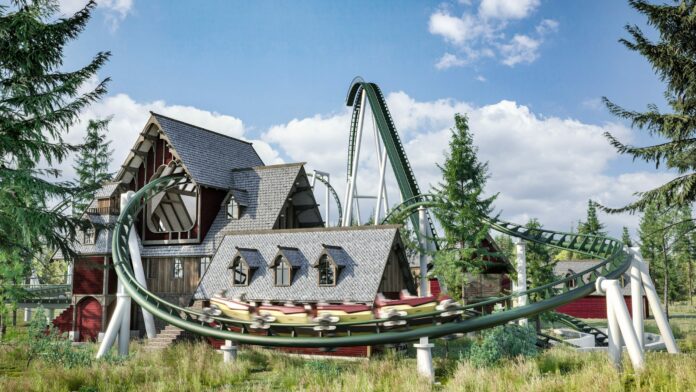 Denmark’s Fårup Sommerland, located in northern Jutland, has today unveiled Fønix (Phoenix), a brand-new roller coaster designed to be the largest and fastest amusement park ride in the country. The ride will stand at 40 meters (131 feet) tall, reach speeds of up to 95 kilometers an hour (59 mph), and feature a “stall loop” element.

Fårup Sommerland is expecting Fønix to rise up and overlook the entire park by April 2022.

“This is an historic day for us here at Fårup Sommerland,” said Niels Jørgen Jensen, CEO of Fårup Sommerland. “We are extremely proud to finally unveil our plans to develop and build Denmark’s largest and fastest roller coaster, which will be ready for our guests next year. We’ve been working on it for a long time, and I look forward to see our guests enjoying what it has to offer.”

Fønix will also feature a “stall loop” — a spectacular element combining classic looping with the inverted stall into one unique element. In this element the train is forced into an overhead position by half a loop followed by an inverted camelback where the riders experience a period of 2.5 seconds of weightlessness before entering the second half of the loop combined with a twist.

The king of Scandinavian airtime

“This is one of the first times the world gets to see and experience a truly unique roller coaster design. We expect the stall loop, as well as all the other exciting Fønix elements, to become a magnet for many roller coaster lovers and enthusiasts all around the world,” said Jensen. “At the same time, we also encourage Danish and international guests to come and experience Fønix. We promise it’ll be a breathtaking and fun ride you won’t forget.”

Vekoma Rides is the brains behind Fønix’s unique design and construction. Total investment of this project is approximately DKK 100 million (US$ 16 million), making it the park’s largest-ever single investment. The second largest was back in 2013 when roughly DKK 44 million (US$ 7.9 million) was invested into building Orkanen, a popular suspended family coaster.

According to Jensen, this investment will likely be one of the biggest in the Danish tourism industry for 2022, something he believes is necessary to attract guests and tourists back to Denmark.

“The tourism industry has been hit hard by the pandemic. It’s extremely important for big tourism players like ourselves to invest in new and exciting attractions. This will ultimately create long-term competitive advantages, which will ultimately push the industry back on to safer ground during and after the pandemic,” said Jensen.