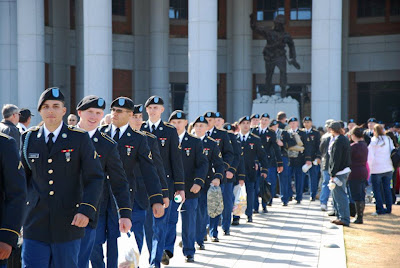 “With this coin, the Infantry adds silver to its blue,” said United States Mint Associate Director for Sales and Marketing B.B. Craig. “U.S. Army Infantry soldiers represent the highest American ideals of citizenship, and our hope is that this Infantry Soldier Silver Dollar will connect Americans to those ideals — courage, pride, sacrifice, sense of duty and the history of the Infantry.”

As special recognition of today’s ceremony, the 198th Infantry Brigade’s distinguished honor graduate, the drill sergeant for this cycle and each of the close to 200 graduating infantrymen were presented the 2012 Infantry Soldier Silver Dollar by active duty and retired command sergeants major. Following the ceremony, the commemorative silver dollar coins were available for purchase at several locations at the National Infantry Museum and Soldier Center.

The coin’s designs are emblematic of the courage, pride, sacrifice, sense of duty and history of the Infantry. The obverse (heads side) features a modern Infantry soldier on rocky ground charging forward and beckoning the troops to follow, symbolizing the “Follow Me” motto of the Infantry. Inscriptions are LIBERTY, IN GOD WE TRUST and 2012. The representation of the contemporary soldier captures the essence of the Infantry’s motto.

The reverse (tails side) features the crossed rifles insignia, the branch insignia of the Infantry. The insignia is a universally recognizable symbol of the Infantry, as all members wear it. Inscriptions are UNITED STATES OF AMERICA , ONE DOLLAR and E PLURIBUS UNUM.

As authorized by P.L. 110-357, the United States Mint is producing up to 350,000 commemorative coins in both proof and uncirculated qualities. Customer demand will determine the ratio of each version produced. Surcharges collected from sales of the commemorative coins are authorized to directly benefit the National Infantry Foundation.

Customers may purchase the 2012 Infantry Soldier Silver Dollar at the United States Mint’s secure Web site, www.usmint.gov/catalog, or at 1-800-USA-MINT (872-6468).

The United States Mint, created by Congress in 1792, is the Nation’s sole manufacturer of legal tender coinage and is responsible for producing circulating coinage for the Nation to conduct its trade and commerce. The United States Mint also produces proof, uncirculated and commemorative coins; Congressional Gold Medals; and silver, gold and platinum bullion coins.

Joe Kleimanhttp://wwww.themedreality.com
Raised in San Diego on theme parks, zoos, and IMAX films, InPark's Senior Correspondent Joe Kleiman would expand his childhood loves into two decades as a projectionist and theater director within the giant screen industry. In addition to his work in commercial and museum operations, Joe has volunteered his time to animal husbandry at leading facilities in California and Texas and has played a leading management role for a number of performing arts companies. Joe previously served as News Editor and has remained a contributing author to InPark Magazine since 2011. HIs writing has also appeared in Sound & Communications, LF Examiner, Jim Hill Media, The Planetarian, Behind the Thrills, and MiceChat His blog, ThemedReality.com takes an unconventional look at the attractions industry. Follow on twitter @ThemesRenewed Joe lives in Sacramento, California with his wife, dog, and a ghost.
Share
Facebook
Twitter
Linkedin
Email
Print
WhatsApp
Pinterest
ReddIt
Tumblr
Previous article3net Releases Comprehensive Shooting Guide for 3D Monitors and Displays
Next articleCedar Fair Retains Spencer Stuart for Board of Directors Review