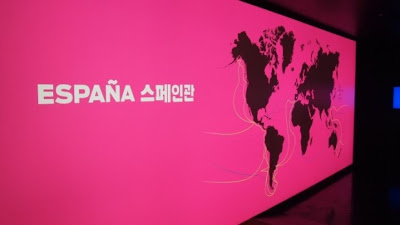 The Organizing Committee of the Expo announced that 15 countries that use Spanish as an official language including Spain, Argentina and Columbia would hold a series of cultural events inside the Expo marking the“Spanish Language Day”on Saturday, June 23rd.

The “Spanish Language Day”has been celebrated on the first Saturday at the beginning of each Summer since 2009 by countries in the Spanish-speaking region, with the aim of promoting Spanish culture around the world. In this year, Spain, Argentina, Columbia, Ecuador, El Salvador, Guatemala, Equatorial Guinea, Honduras, Mexico, Nicaragua, Panama, Paraguay, Peru, Dominican Republic and Uruguay hold the festival.

“Spanish Language Day” will begin with an official ceremony in participation of ambassadors, government representatives and pavilion directors of the participating countries in the Expo Digital Gallery(EDG) at 10:30 am, and a promotional video showing images related to seven Spanish words—Hola (Hello), Gracias (Thank You), Agua (Water), Vida (Life), Oceano (Ocean), Fiesta (Festival), Amigo (Friend)—will be shown to the public on the 218-meter-wide EDG screen.

Visitors will be invited to Spanish language classes twice on the day, from 11am to 2pm and from 3pm to 5pm in each of the 15 countries’ pavilions, along with Latin dance classes featuring Flamingo and Tango in the Spain and Argentina Pavilions.

A Spanish song contest will add to the festivity in front of Spain Pavilion starting at 2pm.

Participants in the events will also be entertained by grand prize drawing events with give-aways suc as dinner coupons for two at restaurants of Spain and Peru Pavilions.

Inigo Alvarez Miranda, the Spanish PR director, said that “as evidenced by the worldwide popularity of the Spanish novel ‘Donkihote’, there exists no boundary in literature and language,” and that “we hope that Spanish Language Day will be celebrated not just by Spanish-speaking countries but also by all participating nations and visitors to the Expo, making it a truly global festival.”

Joe Kleimanhttp://wwww.themedreality.com
Raised in San Diego on theme parks, zoos, and IMAX films, InPark's Senior Correspondent Joe Kleiman would expand his childhood loves into two decades as a projectionist and theater director within the giant screen industry. In addition to his work in commercial and museum operations, Joe has volunteered his time to animal husbandry at leading facilities in California and Texas and has played a leading management role for a number of performing arts companies. Joe previously served as News Editor and has remained a contributing author to InPark Magazine since 2011. HIs writing has also appeared in Sound & Communications, LF Examiner, Jim Hill Media, The Planetarian, Behind the Thrills, and MiceChat His blog, ThemedReality.com takes an unconventional look at the attractions industry. Follow on twitter @ThemesRenewed Joe lives in Sacramento, California with his wife, dog, and a ghost.
Share
Facebook
Twitter
Linkedin
Email
Print
WhatsApp
Pinterest
ReddIt
Tumblr
Previous articleUAE Designed Robot Welcomes Visitors to Country’s Pavilion at Yeosu EXPO 2012
Next articleMary Kay Museum Listed "Top Sight to See in Dallas" in Recent Poll