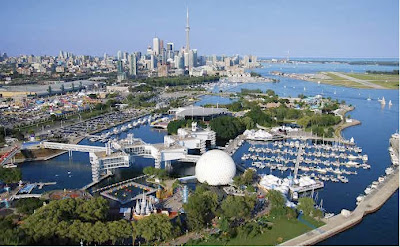 The report cites the amusement park mentality of the facility as being unable to sustain attendance, resulting in annual losses.  It recommends removal of amusement rides and the waterpark, noting that these services are now offered by other entities in the greater Toronto market, including Canada’s Wonderland and White Water Kingdom, that were not present at the time of Ontario Place’s opening.

In place of the current attractions, the Panel recommends a year-round open admission park that offers a combination of retail, higher education, and residential development, wilderness areas with open access to the waterfront for all, and public meeting spots for festivals, concerts, and other events.  The Panel noted that Ontario Place has continued to operate under an audience model of families with young children when in fact the demographics of the Toronto market has shifted towards seniors and also immigrant populations, which currently comprises 1/3 of Toronto residents.  The new plan takes into effect needs and interests for both of these groups.

The report mentioned that Cinesphere opened in 1971, housing the world’s first permanent IMAX projector.  It recommends that the Cinesphere building, along with accompanying pods, be retained for their historical architectural significance and that new architectural designs compliment them.  However, the future of IMAX operation, which ceased when Ontario Place was suddenly closed on February 1, 2012, was not included.

The Panel has recommended against including a casino in the plan, although a hotel and resort was mentioned as a viable possibility.

Joe Kleimanhttp://wwww.themedreality.com
Raised in San Diego on theme parks, zoos, and IMAX films, InPark's Senior Correspondent Joe Kleiman would expand his childhood loves into two decades as a projectionist and theater director within the giant screen industry. In addition to his work in commercial and museum operations, Joe has volunteered his time to animal husbandry at leading facilities in California and Texas and has played a leading management role for a number of performing arts companies. Joe previously served as News Editor and has remained a contributing author to InPark Magazine since 2011. HIs writing has also appeared in Sound & Communications, LF Examiner, Jim Hill Media, The Planetarian, Behind the Thrills, and MiceChat His blog, ThemedReality.com takes an unconventional look at the attractions industry. Follow on twitter @ThemesRenewed Joe lives in Sacramento, California with his wife, dog, and a ghost.
Share
Facebook
Twitter
Linkedin
Email
Print
WhatsApp
Pinterest
ReddIt
Tumblr
Previous articleJeremy Railton on media-based attractions
Next articleGold Rush in Danish amusement park