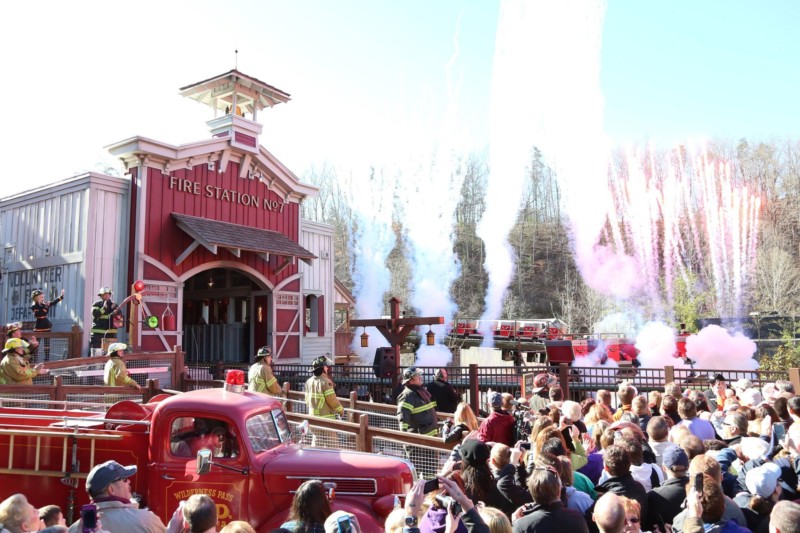 [quote]FireChaser Express celebrates our heroes—firefighters—and it reminds the rest of us that we can all be heroes if we’ll just step up and help others, whether it’s in a small way or a big way.” — Dolly Parton[/quote]

Pigeon Forge, TN, USA — Already home to a number of innovative family attractions, Dollywood theme park added to its roster with the debut of FireChaser Express, the nation’s first dual-launch family coaster that travels both forward and backward.

Boasting a 39-inch minimum height requirement, FireChaser Express invites families to enjoy the exciting journey as a group. Perched 12 stories above the park’s Wilderness Pass area, FireChaser Express launches twice, blasting riders forward and backward on a winding 2,427-foot track. The coaster is projected from the loading station traveling from zero to 16 mph in just 1.1 second. Near the end of the ride, a backward launch from zero to 20 mph in two seconds sends FireChaser Express hurtling back to the station in the opposite direction.

“My new FireChaser Express has folks goin’ in all different directions, and that’s going to be a lot of fun but it teaches an important lesson, too,” Dolly Parton said.

Volunteer recruits are invited to climb aboard FireChaser Express as it launches from Station 7 in Dollywood’s Wilderness Pass on a thrilling adventure to save the Smokies from potential fire hazards. Along the way, guests flash across mountainous terrain, through giant fire towers, and dodge fallen telephone poles and crashed rockets. During the excursion, guests discover Crazy Charlie Cherriebaum’s Gas & Fireworks Emporium, a haphazard roadside stand that proves fireworks, gasoline and lightning do not mix. After a surprise explosion, FireChaser Express is launched backward, through another section of track, ultimately delivering recruits to Station 7 in reverse.

FireChaser Express celebrates the volunteer-based fire departments of the 1940s which protected the neighboring Great Smoky Mountains National Park. During this time, firefighting trains were a common sight throughout the park. FireChaser Express’ passenger trains are themed to celebrate all firefighters who bravely battle perilous blazes to ensure the safety of others.

Dollywood opened its 29th season with a spectacular lineup of entertainment as part of Festival of Nations, now through April 21. Mother Africa and La Danza de Colombia highlight the festival, which includes impressive displays of cultural activities and authentic cuisine from around the globe.

FireChaser Express is the latest addition to The Dollywood Company’s list of unique new rides. In March 2012, Dollywood opened the $20 million Wild Eagle, the country’s first wing coaster. In 2013, Dollywood’s Splash Country followed with the addition of RiverRush, Tennessee’s first and only water coaster.

Joe Kleimanhttp://wwww.themedreality.com
Raised in San Diego on theme parks, zoos, and IMAX films, InPark's Senior Correspondent Joe Kleiman would expand his childhood loves into two decades as a projectionist and theater director within the giant screen industry. In addition to his work in commercial and museum operations, Joe has volunteered his time to animal husbandry at leading facilities in California and Texas and has played a leading management role for a number of performing arts companies. Joe previously served as News Editor and has remained a contributing author to InPark Magazine since 2011. HIs writing has also appeared in Sound & Communications, LF Examiner, Jim Hill Media, The Planetarian, Behind the Thrills, and MiceChat His blog, ThemedReality.com takes an unconventional look at the attractions industry. Follow on twitter @ThemesRenewed Joe lives in Sacramento, California with his wife, dog, and a ghost.
Share
Facebook
Twitter
Linkedin
Email
Print
WhatsApp
Pinterest
ReddIt
Tumblr
Previous article170 Family Entertainment Center Professionals Attend IAAPA’s FEC Las Vegas Event
Next articleSennheiser Names Two Area Sales Managers