First F1 Simulators to be Installed at Orlando’s WhirlyDome 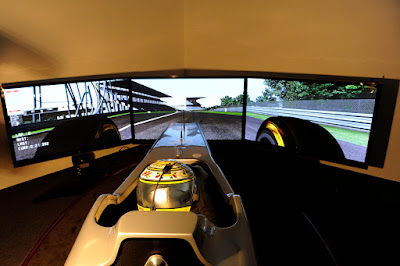 San Anselmo, CA, USA (April 16, 2012) /PRWEB/ — Just a few weeks before the first F1 simulator SYM 026 arrived in Florida, to be installed at Orlando’s newest attraction, the WhirlyDome, the Ferrari Auto SpA asked to have a SYM 026 installed at the company’s historic raceway in Fiorano, Italy on the occasion of the yearly meeting with the team’s major sponsor, the financial group Santander.

The excitement was high when Evotek Engineering srl, the small Italian advanced automotive research and design company received the call from Ferrari, the automotive company behind the iconic F1 team that has won more Formula 1 grand prizes than any other team in the history of this sport. Scuderia Ferrari and its main sponsor, Santander, had just announced at the time that their partnership would continue through 2017, and Ferrari wanted to have the best F1 simulator available to entertain and engage their guests.

In a world where corporations are willing to pay good money to associate their brands with the trademark symbol of Ferrari, the cavallino rampante (prancing horse), the request by Ferrari to feature one SYM 026 at the important yearly meeting with the team sponsors, is tantamount to a platinum, real life endorsement by the most recognizable F1 team in the world.

There is a reason that Scuderia Ferrari made this choice. The body shell of the SYM 026 is built to the exact specifications of the 2011 F1 by the FIA (Fédération Internationale de l’Automobile, or International Federation of Automobile, in French), which is the governing body for world’s motor sport.

The SYM 026 Professional version is dedicated to professional racing drivers and / or racing teams. The software installed in this version is the most complex and complete, as it processes all the same data that is processed live, during real races in real time. This includes the amount of gas used and wheel status, among others. In order to provide reliable data, the graphic rendition of the raceways is obtained by scanning the real tracks several times, then processing the various takes. In addition to providing unparalleled high definition, the data thus extrapolated, provides the team engineers and the driver with reliable and realistic information.

The SYM 026 Training version was designed specifically for car racing schools, and it is the only model that features a modified platform. The software used in this version is the same as that used in the Virtual Game one.

The SYM 026 Virtual Game version is dedicated to the entertainment industry, and has two software differences compared to the Professional version.

First of all, the proprietary software was stripped of the features which provide the technical information to the engineers. This data would be incomprehensible and distracting for the game player. However, the tracks and the hardware are the same used by professional drivers, so the visual and physical experiences are exactly the same.

Evotek Engineering is working with rFactor to add their software to the Virtual Game version of the SYM as well. Though the graphic quality of the raceways is lower compared to that provided by the proprietary software, by installing also what is currently the standard used by all simulators for entertainment, it allows for racing with a wider variety of cars and raceways, such as the INDIE tracks.

In addition, the SYM 026 platforms can be networked together through the Racing Center, allowing for virtual races and competitions among riders.

The SYM 026 Static version is basically the Virtual Game platform without the motion card and the three motors which provide the realistic motion of the car race. It can be easily converted.

The opportunity to experience the SYM 026 in the US is just weeks away at the Whirly Dome in Orlando, Florida.

About Evotek US, LLC
Evotek US, LLC was founded in California in 2010 to import and distribute the innovative products created by Evotek Engineering srl in the US, starting with the elegant, minimalist 4Lock for Apple iPhone, and now the SYM 026.

About WhirlyDome
The WhirlyDome, Orlando’s newest and perhaps most unique attraction, is set to open its doors in late April and will introduce Orlando to the world’s first totally mechanized team sport, WhirlyBall, as well as the F1 Racing Simulator, SYM 026, the first of its kind in North America. WhirlyDome will also be the home of Lazer Frenzy, Laser Tag, self-serve bowling, an array of arcade games and live entertainment. Not only WhirlyDome be a place to play, it will also be a place to relax and unwind while enjoying a drink, lunch or dinner at Bloodhound Brew Pub & Eatery. Bloodhound Brew is a casual pub featuring local specialty craft beers and a full menu made from scratch with both indoor and outdoor seating.

Joe Kleimanhttp://wwww.themedreality.com
Raised in San Diego on theme parks, zoos, and IMAX films, Joe Kleiman would expand his childhood loves into two decades as a projectionist and theater director within the giant screen industry. In addition to his work in commercial and museum operations, Joe has volunteered his time to animal husbandry at leading facilities in California and Texas and has played a leading management role for a number of performing arts companies. Joe has been News Editor and contributing author to InPark Magazine since 2011. HIs writing has also appeared in Sound & Communications, LF Examiner, Jim Hill Media, and MiceChat. His blog, ThemedReality.com takes an unconventional look at the attractions industry. Follow on twitter @ThemesRenewed Joe lives in Sacramento, California with his fiancé, two dogs, and a ghost.
Share
Facebook
Twitter
Linkedin
Email
Print
WhatsApp
Pinterest
ReddIt
Tumblr
Previous articleRare Chance to Drive Exotic Cars with Racing Legend Christian Fittipaldi at WDW
Next articleGive Kids the World Reaches 2 Million Hours of Volunteer Service