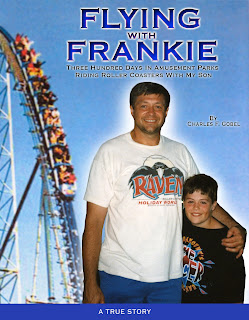 In 1994, Charlie Gobel and his son, Frankie, took their first roller coaster ride together, and they are still at it. Members of the American Coaster Enthusiasts Club since 1996, it’s doubtful many father and son duos have spent more days in amusement parks riding roller coasters together than they have: over 300! Charlie has just written a book chronicling their adventures called Flying With Frankie- Three Hundred Days In Amusement Parks Riding Roller Coasters With My Son, and here is an excerpt from it.

“Please, Dad, can we go on the roller coaster, just one time?”

It took me a few seconds to fully grasp what my boy was trying to convey to me at that moment, but eventually I got his drift. It appeared as if Frankie and I had just stumbled across the park’s big wooden roller coaster, Rolling Thunder, for the first time that day, and a certain pint-sized someone had very strong designs on taking that thrill ride for a spin.

“Because I said so!”

And I meant every syllable. It was nine o’clock at night and way too late to ride a roller coaster. We had already spent ten hours at the park, and I was way too tired to wait on line to hop on this big, wooden monstrosity. I wasn’t exactly young, and after I had trudged miles and miles all day long, I was way too achy to take a coaster jaunt. And unbeknownst to anyone but me, I was also way too chicken. 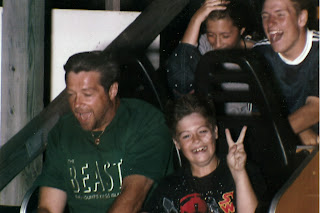 I actually grew up right outside of a major amusement park, the renowned Palisades Amusement Park inCliffside Park, New Jersey, and had hundreds of opportunities as a kid to ride the thrill spot’s humongous wooden roller coaster. And I didn’t even ride it once. No one could get me up on top of that thing, not even the fifteen year-old and very alluring Sandra DeBoise, and she could be pretty persuasive. I was scared senseless of taking a ride on a roller coaster back then, and I doubted my acrophobic tendencies had taken a turn for the better over the years. I was not about to take on Rolling Thunder, anytime, anyway, or anyhow soon.

Doesn’t he ever get tired or worn out or just plain bored with always trying to get his way? I mumbled to myself, as Frankie gibbered so frantically about needing to ride this ride that it almost sounded as if he was speaking in tongues. But I was still having no part of it, until I noticed a way I could actually get him to pipe down and teach him a lesson at the same time. Perfect. 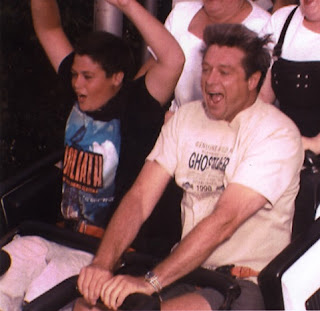 I observed that Rolling Thunder had a minimum height requirement to ride the ride, as most coasters did, and this frantic bone crusher’s was forty-two inches. My son was only five years old, and he was maybe thirty-eight inches short. There was no way anyone with a clear conscience would jeopardize the safety of my boy and let him on to ride this silly thing. I was extremely confident that the diligent and well-trained ride attendants would be very strict. They’d measure Frankie, say “Sorry little fella,” and then throw us off. My son would proceed to have a conniption fit, and then we’d happily go home.

This did have the makings of such a great plan. Unfortunately, what I hadn’t accounted for in my little scheme was the fact that all of the ride attendants were teenagers, and it was pretty common knowledge that teenagers just loved to flirt and hang all over one another. That’s what this group was doing when we got to the front of the line for the ride, and none of them cared the slightest bit how tall my little Frankie was, nor did they have the time or inclination to measure him. I could have walked on that roller coaster with Mini-Me at that point, and we were going for a spin.

Obviously, I wasn’t about to cowardly back out of the unlikely adventure at that late stage of the agony, so off we went into the wild, black yonder- a vertically challenged and very excitable five year-old boy, and his hyperventilating, near old-geezer of a dad- taking their very first roller coaster ride together. And maybe a minor miracle had just taken place.

As the roller coaster screeched back into the station at the tail end of that frenetic ride, with Frankie’s nonstop laughter still ringing in my ears, I just knew this was not going to be our first and only coaster ride together.

When I immediately got a glimpse of the joy and rapture on my son’s face, as the coaster car came to a jolting halt, I had a feeling the two of us were going to come back to this place again…..really soon.

As we exited the attraction, and Frankie blathered on so feverishly about his love for the thrill ride that it made his earlier pleas to ride seem more like silent prayers, I sensed my boy had just discovered a new and favorite pastime. 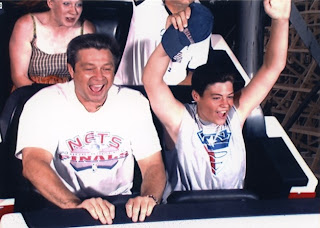 And when he caught his breath just long enough to beg, “Please Dad, can we go on again? Dad, Dad….just one more time?,” I had a sneaking suspicion the two of us were about to spend a lot more time in amusement parks. And my suspicions were quickly confirmed.

That single, solitary coaster ride on that steamy night in August, hooked the two of us forever on amusement parks and the pleasures associated with riding the amazing scream machines they were home to. Somehow my fear of heights had miraculously disappeared, and after Frankie had gotten his very first taste of coaster riding, he couldn’t wait for his next journey on a “flying” machine. So off we went.

Over the next fifteen years, Frankie and I traveled by car, by plane, and even sleeper-car train to all parts of the country to ride roller coasters of all sizes and heart-thumping capabilities.

We ultimately got to spend over three hundred days together in an amusement park of some type, drove thirty-five thousand miles in each other’s company to forty distinct parks in sixteen different states, screamed to thousands of coaster rides, and shared in enough belly laughs over the course of our zany trips to fill up a dozen laugh tracks for the syndicated Seinfeld show. 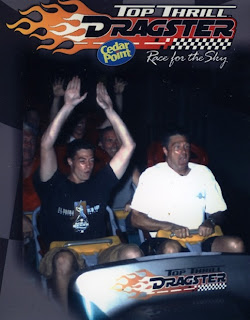 The inevitable divorce from Frankie’s mom eventually shed the “inevitable” part of the tag, and brought along with it the standard trappings of hardship and despair. But our mutual love of riding roller coasters, as well as the steadfast bond we developed because of it, made sure we never went all too long without being by each other’s side.

Flying With Frankie is our story.

From the Introduction to the book, Flying With Frankie- Three Hundred Days In Amusement Parks Riding Roller Coasters With My Son.

Charlie and Frankie are on their way to Canada’s Wonderland in August to ride Leviathan. Follow them on www.flyingwithfrankie.com