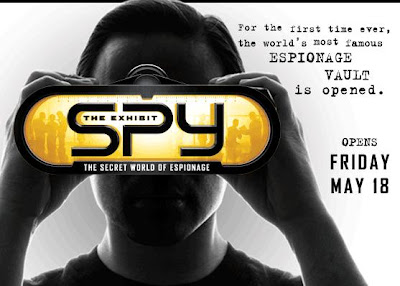 New York, NY, USA (May 8, 2012) /PRNewswire/ — Forget what you think you know about spies and the tools they use. The newest interactive attraction headed for Discovery Times Square, SPY: The Secret World of Espionage, offers visitors the first-ever public exhibition of treasures from the collections of the CIA, the FBI, the National Reconnaissance Office (NRO), and H. Keith Melton, the renowned author, historian, and international authority on spy technology. Visitors will see real gadgets and real artifacts from spies and spy catchers. They will observe real spy technologies, and learn the real tools-of-trade, some recently declassified. Arriving to New York City on May 18, 2012 for its world premiere, SPY grants guests unprecedented access into the real world of espionage.

SPY’s extensive collection of espionage-related artifacts, both historic and contemporary, will illustrate the fascination behind the world of spies. Many of the artifacts on display at SPY come straight from the unparalleled 10,000-plus personal artifact collection of H. Keith Melton, author of several books on the subject, including the best-selling The Ultimate Spy and the forthcoming Spy’s Guide to New York City . The remaining artifacts come straight from the collections of some of the world’s leading intelligence agencies, including the CIA, the FBI and the NRO. There has never been a shortage of intrigue in the world of spies, and the artifacts and interactives in SPY vividly tell their stories, past and present, through actual tools, technologies, and testimonials.

Among the extraordinarily rare items are:

Of particular interest to New Yorkers will be artifacts, video surveillance tapes, and other items from the collection of the FBI related to “Ghost Stories,” the infamous Anna Chapman Russian spy case that beguiled New Yorkers and, indeed, all Americans just two years ago. The case is arguably the most successfully foiled clandestine operation in contemporary American history, and visitors will see shocking, recently declassified surveillance videos of the undercover Russian spies in New York City, along with many of their personal belongings and tools.

But even before this case, the Big Apple has long been a hotbed of spy activity in the United States, making it the ideal location for the exhibition. To honor the world premiere of SPY in New York City, H. Keith Melton has published a new book entitled, Spy’s Guide to New York City, which takes readers through a tour of spy activities and their locations in the Big Apple.

“It is extremely unusual for the general public to get any glimpse into the real world of espionage, let alone this kind of immersive real experience,” said Melton, an adviser to US intelligence agencies on historical espionage equipment. “The work of the intelligence community today truly influences the news headlines of tomorrow, yet it’s a world that remains a mystery to most people. Nowhere in the world can the general public see what we reveal in SPY.”

In addition to the fascinating artifacts, SPY will allow visitors the unique opportunity to experience first-hand the technologies and tools utilized by intelligence agencies across the globe. Visitors will see and hear from real spies telling their personal stories, including from Oleg Kalugin, the former head of KGB Counterintelligence in Washington.

Visitors to SPY will find an educational, entertaining introduction to spy skills and techniques that have not previously been displayed, Melton noted. “New York will get a thrill equivalent to opening an envelope marked ‘top secret.’ Espionage is so much more than what you see on TV – there are real dangers and incredible technologies involved, and SPY lets you experience it all. For the general public, visiting SPY will be a once-in-a-lifetime opportunity.”

Visitors to SPY won’t have to crack a code to find out how invisible ink, listening devices, and subminiature cameras have been utilized for surveillance and information-gathering. The exhibition will unveil all of these secrets and more, allowing visitors to become a clandestine agent for a day and learn how to create a disguise, navigate through security laser beams, see through walls, and monitor New York City by satellite.

SPY opens on May 18, 2012 at Discovery Times Square, located at 226 West 44th Street. The interactive exhibition is open Sunday – Thursday, from 10am – 8pm, and Friday – Saturday, from 10am – 9pm, with the last allowed entry 45 minutes prior to closing each night.

About Spy: The Secret World of Espionage
Presented by BASE Exhibitions, a division of Base Entertainment, Spy: The Secret World of Espionage is a once-in-a-lifetime opportunity to step inside the real world of intelligence. Forget what you think you know about spies from movies and novels, where fantasy usually gets mixed in with only a few kernels of truth. This interactive new exhibit will take you beyond the fiction and Hollywood drama and put you face to face with the fascinating truth behind the scenes. Encounter real stories and actual gadgets revealed for the first time ever from the CIA vault. Experience what it’s like to be a spy firsthand by creating your own disguises, altering your voice, and navigating laser beams. Plus, gain exciting new insights into how intelligence really works – how science and technology play a major role, and discover how the men and women who do this kind of work shape the course of history every day.

BASE Entertainment (Producer)
BASE develops, produces and manages intellectual properties generated for live entertainment stages in North America, Asia and Brazil. BASE’s current production activity includes the following productions in Las Vegas: Peepshow at Planet Hollywood, Phantom at The Venetian, Jersey Boys at The Paris, Absinthe at Caesars Palace and Defending the Caveman at Harrah’s. In addition, BASE operates the Showroom and The Theatre for the Performing Arts at Planet Hollywood in Las Vegas. At Marina Bay Sands in Singapore, BASE programs both the Grand Theater, previously home to both The Lion King and Wicked, and the Sands Theater. In Brazil, BASE, with Geo Eventos, opened Priscilla Queen of the Desert in Sao Paulo in March 2012. In 2013, BASE will premiereBarry Levinson and Sheryl Crow’s new musical Diner on Broadway. Spy: The Secret World of Espionagerepresents the premiere museum quality exhibition developed and presented by BASE. BASE Entertainment’s headquarters are in New York, and its founders include industry veterans Brian Beckerand Scott Zeiger.

Bright Lights Educational Foundation (BLEF) is a non-profit organization with the mission to provide financial assistance to help disadvantaged students attend iconic, educational, and entertaining exhibits that tell the greatest human stories from history and the curriculum and lesson plans to support the experience.

Joe Kleimanhttp://www.themedreality.com
Raised in San Diego on theme parks, zoos, and IMAX films, Joe Kleiman would expand his childhood loves into two decades as a projectionist and theater director within the giant screen industry. In addition to his work in commercial and museum operations, Joe has volunteered his time to animal husbandry at leading facilities in California and Texas and has played a leading management role for a number of performing arts companies. Joe has been News Editor and contributing author to InPark Magazine since 2011. HIs writing has also appeared in Sound & Communications, LF Examiner, Jim Hill Media, and MiceChat. His blog, ThemedReality.com takes an unconventional look at the attractions industry. Follow on twitter @themedreality Joe lives in Sacramento, California with his fiancé, two dogs, and a ghost.
Share
Facebook
Twitter
Linkedin
Email
Print
WhatsApp
Pinterest
ReddIt
Tumblr
Previous articleParade and Nighttime Spectacular Officially Open May 8 at Universal Studios Florida
Next articleCongress Going Wild with AZA Visit