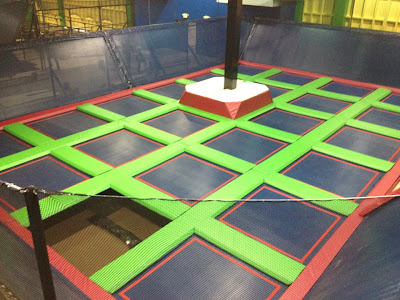 Redlands, CA, USA (December 11, 2012) /Marketwire/ — An old image can be hard to forget, but owners of Splash Kingdom, located where Pharaoh’s Adventure Park once was, are urging former patrons of Pharaoh’s to do just that with a visit to the Splash Kingdom entertainment complex. New management has spent a year overhauling and improving the property, and developing Splash Kingdom Waterpark and the brand new SkyTown Indoor Trampoline Park unveiled in November. Splash Kingdom/SkyTown has replaced Pharaoh’s and offers a double dose of clean, family friendly fun with no trace of the former rough edged park.

The vision for the new parks was put into motion by the Splash Kingdom management when they took over the park one year ago. The seasoned team includes senior management from Orange County’s Wild Rivers Waterpark which earned a family-friendly reputation during its 25+ years of operation.

The new owners and management team have completed dramatic improvements to the property this year, including the 18,000 square foot Cast-Away Cove wave pool and doubling the outdoor seating and shade. Splash Kingdom also started their successful Summer Adventure Camps program for children 7-12. Within the past six months, the park has provided group accommodations for the Boy Scouts, churches, schools and corporate banquets/parties. After the successful Jeremy’s Camp concert (a popular Christian Rock band) this year, management plans to host a family-focused summer concert series in 2013.

Patrons who want to experience the difference at Splash Kingdom can visit the property’s fun park with bumper boats, arcade and more, or visit the all-new SkyTown that is open now. SkyTown offers a 12,000 square foot wall-to-wall trampoline arena with The Pit (foam pit to jump/flip into), Dodgeball, Slam Basketball and the Main Jumping Courts. SkyTown is the only trampoline park of its kind in the heart of the Inland Empire. Many have already visited SkyTown since the grand opening just weeks ago in November. SkyTown hosted fifteen birthday parties this past weekend and is fast becoming the premier birthday party destination for kids of all ages.

“I couldn’t believe the transformation of Splash Kingdom/SkyTown,” said Natalie Gorges of Redlands. “There has been such a negative image of this location when it was that Pharaoh’s place, but so many of my friends told me I had to go because it had completely changed! They were right! The new owners have earned back my trust and we all have season passes — our entire family!”

“The Pit rocks!” according to Matt Roque, 17, from Redlands. “The foam pit is really cool. My favorite though is the Slam Basketball courts. With the trampolines, I can now dunk big time! They have dodgeball teams here too. Some friends and I are going to get a team together and join the league.”

SkyTown is open now. Splash Kingdom Waterpark will reopen for the summer season in May 2013. Splash Kingdom/SkyTown is situated in the “Heart of the Inland Empire,” just off Interstate 10 (San Bernardino Freeway) at California Street in Redlands, California.

About Splash Kingdom/SkyTown
Splash Kingdom Waterpark was founded and built in 1995 and located in Redlands, the heart of the inland Empire. The entertainment complex is 20 acres and located directly off the 10 freeway. The property includes a waterpark and the all-new SkyTown Trampoline Park, family fun center (Go-Karts, Bumper Boats and Miniature Golf), an arcade, birthday rooms and state of the art banquet, lounge and special event facilities. Since opening the doors, over 4 million guests have visited Splash Kingdom and the park employs more than 500 each year. Splash Kingdom/Sky Town’s goal is to provide a safe, fun and clean family entertainment experience that benefits the local community and residents.

Joe Kleimanhttp://wwww.themedreality.com
Raised in San Diego on theme parks, zoos, and IMAX films, InPark's Senior Correspondent Joe Kleiman would expand his childhood loves into two decades as a projectionist and theater director within the giant screen industry. In addition to his work in commercial and museum operations, Joe has volunteered his time to animal husbandry at leading facilities in California and Texas and has played a leading management role for a number of performing arts companies. Joe previously served as News Editor and has remained a contributing author to InPark Magazine since 2011. HIs writing has also appeared in Sound & Communications, LF Examiner, Jim Hill Media, The Planetarian, Behind the Thrills, and MiceChat His blog, ThemedReality.com takes an unconventional look at the attractions industry. Follow on twitter @ThemesRenewed Joe lives in Sacramento, California with his wife, dog, and a ghost.
Share
Facebook
Twitter
Linkedin
Email
Print
WhatsApp
Pinterest
ReddIt
Tumblr
Previous articleMichelle Larson Named New President of Chicago’s Adler Planetarium
Next articleResorts World Sentosa Grand Opening 7 December 2012 – PHOTOS