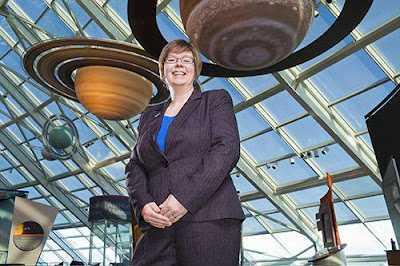 Chicago, IL, USA (December 11, 2012) — The Board of Trustees of the Adler Planetarium has elected accomplished astrophysicist and experienced academic leader Michelle B. Larson, PhD, as president. Dr. Larson will become the Adler’s ninth leader and the first female president of America’s First Planetarium. Her appointment begins January 1, 2013.

As president, Dr. Larson will oversee a 21st century space science center that includes the institution’s landmark museum complex, exhibition galleries and three theaters; a robust research enterprise; one of the world’s leading collections documenting the history of science; and an award-winning education and outreach program. Annually, more than 470,000 people visit the Adler, making it one of Chicago’s leading tourist attractions.

“Michelle’s career in research and university leadership has focused on actively engaging the public in science,” said John W. Estey, President and CEO of S&C Electric Company and Chairman of the Adler’s Board of Trustees. “Her passion for science literacy in today’s technology-driven world, and her dedication to finding innovative ways to make science exciting and accessible for everyone made her a clear choice to lead the Adler in the 21st century.”

“I am honored to have been selected to lead the Adler Planetarium,” said Dr. Larson. “The Adler is an international leader in astronomy research and public engagement and I look forward to working with the museum’s talented staff to advance the understanding of space science and engage all visitors in actively exploring our Universe.”

Dr. Larson currently serves as Vice Provost and Professor of Physics at Utah State University where she works collaboratively with deans, department heads, and vice presidents to deliver exceptional programs of instruction and research. She is engaged in activities that strengthen the interaction between the university and the public. These activities include the creation of a Science, Technology, Engineering, Education, and Math (STEM) Center, and a popular science outreach program, Science Unwrapped that explains the day-to-day, inner workings of modern research and engages the public in meaningful, hands-on activities.

Prior to joining Utah State University in 2006, Dr. Larson was the deputy director of the Center for Gravitational Wave Physics at Pennsylvania State University where she worked to build understanding of gravitational physics and awareness of recent progress in gravitational wave research among the public, educators, students, and scientists of all disciplines.

She also served as the deputy director of NASA’s Montana Space Grant Consortium where she coordinated research and education activities with the faculty and students at 24 affiliate campuses and partners. Dr. Larson was funded by NASA in the Space Sciences Laboratory at the University of California – Berkeley where she worked on several programs that brought the science of NASA missions to the public.

A native of Anchorage, Alaska, Dr. Larson received her undergraduate and graduate degrees in physics from Montana State University. Her postdoctoral work in high-energy astrophysics was completed at the California Institute of Technology.

On her move to the Midwest, Dr. Larson said, “The spirit of Chicago is evident in its people. This is a world-class city with first-rate cultural institutions. My family and I are excited to become a part of this vibrant community.”

She is married to Shane Larson, PhD, also an astrophysicist, and they have one daughter.

Russell Reynolds Associates conducted the search for the new president.

The Adler Planetarium – America’s First Planetarium – was founded in 1930 by Chicago business leader Max Adler. A recognized leader in public learning, the Adler inspires young people – particularly women and minorities – to pursue careers in science, technology, engineering, and math. Scientists, historians, and educators at the museum inspire the next generation of explorers.

Joe Kleimanhttp://wwww.themedreality.com
Raised in San Diego on theme parks, zoos, and IMAX films, InPark's Senior Correspondent Joe Kleiman would expand his childhood loves into two decades as a projectionist and theater director within the giant screen industry. In addition to his work in commercial and museum operations, Joe has volunteered his time to animal husbandry at leading facilities in California and Texas and has played a leading management role for a number of performing arts companies. Joe previously served as News Editor and has remained a contributing author to InPark Magazine since 2011. HIs writing has also appeared in Sound & Communications, LF Examiner, Jim Hill Media, The Planetarian, Behind the Thrills, and MiceChat His blog, ThemedReality.com takes an unconventional look at the attractions industry. Follow on twitter @ThemesRenewed Joe lives in Sacramento, California with his wife, dog, and a ghost.
Share
Facebook
Twitter
Linkedin
Email
Print
WhatsApp
Pinterest
ReddIt
Tumblr
Previous articleCandidate Dossiers for EXPO 2020 Submitted to BIE
Next articleFormer Pharaoh’s Adventure Park Continues Operation as Splash Kingdom and SkyTown