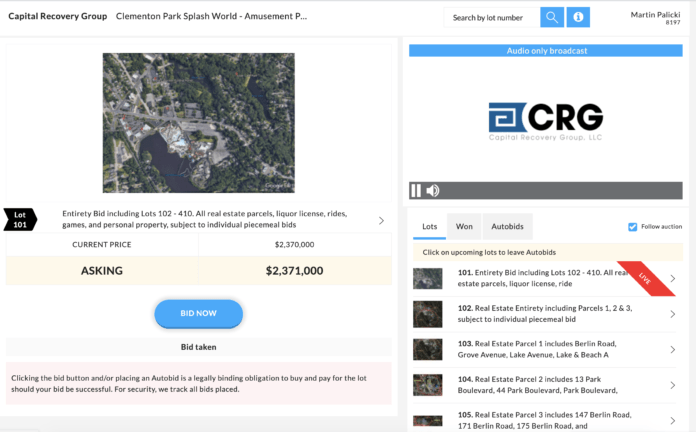 During an online auction on March 23, 2021, Clementon Park was sold to a single bidder for $2.37 million. The identity of the buyer remains unknown. [March 25, 2021 UPDATE: The Philadelphia Inquirer is reporting that the owner of Indiana Beach has purchased the park and intends to reopen it later this year.]

The process for the auction involved an initial bid for the entire property, including all real estate and assets. After some initial confusion surrounding who was eligible to bid for the entire lot, it was determined there was only one eligible bidder and they were given the option to adjust their bid.

Once their bid was set at $2.37m the auction continued through the park’s 250+ lots of property, including everything from the park’s Hell Cat roller coaster to turnstiles, picnic benches, and themed statues.

As IPM learned, in auctioneer parlance this refers to “breaking the bulk.” The bulk is the bid price for the entire property. Breaking the bulk means the individual lot bids exceed that bulk bid price, making a piecemeal sale more valuable to the seller.

At the end of the individual lot auction, the auctioneer consulted with the park receiver and attorneys before announcing that, pursuant to the rules and regulations of the auction, the entire lot would be sold to the single bidder for $2.37 million (plus additional fees and taxes).

Shortly thereafter, IPM received word from Fresh Development LLC founder Melvin Brown Jr. that his group was not behind the winning bid. According to Brown, some last-minute investor issues complicated and ultimately derailed their bid. Brown also indicated from his sources that the successful bidder intended to reopen the facility as an amusement park, though that remains unconfirmed.

As with any transaction of this size and complexity, much remains uncertain. InPark will continue to report and update as we learn more about Clementon Park’s future.