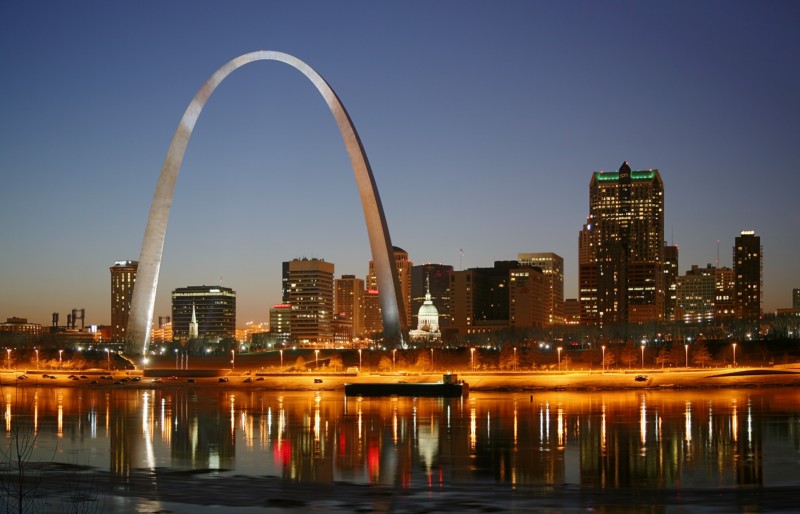 The famous tram ride to the top of the Gateway Arch in St. Louis, Missouri, USA is currently undergoing improvements, along with the extensive revamping of many other features making up the visitor experience in and around this destination attraction. We looked into the engineering details.

The Gateway Arch is ranked as the tallest man-made monument in the United States at 630 feet high, and it is also one of the most recognizable. This icon and international tourist destination was designed by the famous, visionary modernist architect Eero Saarinen. For the half-century it has existed, the Arch has also offered one of the most famous rides in the world. This is no standard elevator: the monument’s shape called for a unique, custom tram system to bring visitors to the observation deck at the top.

Upwards of 926,500 tickets are sold annually for the tram ride. After decades of service, major components vital to this system are being updated or replaced to ensure continued safe operation for years to come.

The Arch resides on a National Park Service (NPS) site known as the Jefferson National Expansion Memorial along the Mississippi River in downtown St. Louis. Accompanying the trams are other attractions residing either below the Arch or within a short walk nearby. These include a museum with exhibits about the historic westward expansion, a riverboat cruise and the Old Courthouse – an historic landmark best known as the site of the first two trials of the Dred Scott case.

The tram upgrades are independent of a continuing transformation of the grounds and facilities, known as the CityArchRiver project, but are occurring on a partially overlapping timeframe. Major changes to the grounds include a park spanning from the Old Courthouse to the Arch and a new, more inviting visitor center entrance that leads to the trams, museum, theater, and Arch Store. The park is significant as it covers a highway that had formed a barrier between downtown and its icon.  Other highlights include new and refreshed museum exhibits, landscape improvements and accessible pedestrian pathways.

While October 2015 marked 50 years since the completion of the Arch structure, another related milestone will occur in 2017. July 1967 marked the opening of the tram within the north leg (the south leg tram would open later in 1968). The tram system, designed by Richard B. Bowser, is an engineering marvel, all the more impressive considering the short time within which it was conceived and the constraints involved. (No less fascinating – and worth the reader’s further investigation – is the story that took Bowser from concept to contract.)

Each five-passenger cylindrical cabin or capsule starts out hanging below an overhead track and eventually rides above the same track, due to traveling along the curvature of the Arch leg. Similar to a Ferris wheel, leveling is constantly needed to keep passengers upright during their trip. The capsule rotation to remain level is handled by mechanical and electrical sensors with gravity assist. This motion is probably one of the more memorable aspects of the ride, together with the novelty of the original passenger capsules.

A peek out the tram door windows while in motion will reveal a set of stairs that lets you know you are moving, but no outside reference points are visible to help indicate height at any moment until arriving at the top. The journey is mild and gradual. Ascent time is approximately four minutes while the return trip is slightly shorter, although distance traveled is the same. Visitors can take in the views from the observation deck for as long as they like. At full capacity with both trams operating, throughput is more than 400 passengers per hour.

While the improvements to the museum exhibits, grounds and guest services are highly visible, the upgraded Gateway Arch tram ride will not seem any different in the spring of 2017 from the riders’ perspective. It was a goal to maintain the experience. New hoisting components and controls are out of sight of the visitor. Project construction like this is an intense effort and has required many hours by all, especially NPS support staff.

Scheduled for replacement or upgrade were portions of the trams’ electrical system and mechanical equipment responsible for hoisting tram capsules to the apex. Chance Baragary P.E., PMP, Project Director, Gateway Arch Construction at Bi-State Development (BSD) described how replacing aging equipment in such a confined location is easier said than done. “The space constraints have been the biggest challenge since the beginning of design: finding and designing suitable equipment and controls to fit into the tight spaces along with moving new components up and removing demo materials from the top,” said Baragary.

The main components for which functionality was being replaced resided at the top either near or under the observation deck, itself being the narrowest part of the structure. The existing motor-generator (MG) sets, DC motors, and controls that set the trams in motion were removed for a more modern set-up. The old system was swapped out for smaller AC motors, an additional 2:1 gear box, and variable-frequency drives (VFD). Additional programmable logic controllers (PLCs) and an existing PLC will integrate with these new components. “These upgrades will make use of modern technologies and reduce difficulties of sourcing replacement parts, since replacement parts for the original equipment were often difficult to find,” said Baragary. “A project goal was to have as many off-the-shelf parts as possible, but due to the unique applications necessary many components are still somewhat custom in nature.”

Much of the new equipment is housed in a more accessible location than before. Newly constructed platforms in each leg are the home for the VFDs and PLC equipment, but the AC motors remain at the top in the same location as the retired DC motors. The new platforms are accessed via existing traditional service elevators that rise approximately 300 feet in both legs.

Additional new elements will enhance functionality. “Another feature we added as part of this MG project is a separate 7.5hp “inching motor,” said Bargary. This is not for use in normal operation, but allows for a very slow creep of the tram if necessary for maintenance or emergency operation. The inching motor does not rely on the VFD or PLC to enable function, but is rather hardwired in and has a supplemental drive system (the additional mechanical advantage enables movement with such a small motor). “Unrelated to our current MG project there were also new egress platforms recently constructed within the legs,” said Bargary. “Safety of both visitors and employees has always been priority one, and these recent changes supplement the systems that already provided a very safe operation.”

Last but not least is the implementation of a new brake. Under normal operation the PLC/VFD/motor combination stops the tram’s motion, followed by brake sets to lock down the tram while loading and unloading. Unlike the previous brake which actually stopped motion, the new brake does not set until tram movement has ceased. The new braking system is fully integrated with the existing tram and counterweight speed governors, numerous tram position sensors, and door and leveling safeties from an on-board PLC.

The team, safety and ticketing

The NPS and BSD teamed with Maida Engineering, Inc. (Philadelphia) for the new design and equipment specifications; The Harlan Company (St. Louis) was general contractor for the project. Maida is no stranger to the Arch tram system as its engineers performed a thorough evaluation in 2005 and were also involved in a previous PLC implementation.

Maida and the NPS Tram Mechanics spent months figuring out how to best accomplish the project goals. An established relationship had already existed between BSD and the NPS as BSD was responsible for issuing bonds used for the design and construction of the trams. BSD serves both Missouri and neighboring Illinois with multiple enterprises such as local public transportation, a nearby airport, as well as the Gateway Arch trams and riverboats. Per Baragary, “Maintenance and operation of the Gateway Arch trams are a service of one of the Enterprises within BSD. BSD has a long-standing partnership with the National Park Service, with BSD running the trams since commissioned.”

Established parameters are followed operation-wise. Daily inspections are performed, several system interlocks are present to maintain proper operational speed, and E-stop protocols remain in place. Emergency generators are employed to assist during a power outage to prevent a tram from stalling anywhere between load areas.

An upgrade to ticketing and new exhibits in the load zones will complement tram-related changes. New ticketing software by the coincidentally aptly-named Gateway Ticketing Solutions offers same-day online sales and other features not previously available. Sarah Clarke, Acting Director of Operations, Gateway Arch at Bi-State Development said, “Visitors have already responded very positively to our new ticketing system, as online sales have increased from 12% in 2014 to 32% in 2016. We’re also in the process of implementing a brand new, responsive web store which will offer visitors user-friendly access from their computer or mobile device.”

Clarke touched on other aspects of what guests can expect in the new experience, which seems likely to help drive up future visitation numbers. “A top priority for the new tram tour is for visitors to feel a part of an immersive experience prior to boarding the tram. For example, each visitor must be assigned a boarding pass designating their tram car, but during that process, we don’t want visitors to simply feel like they’re waiting in line. Visitors will be greeted by their tour guide and led through a guided audiovisual experience for the first 20-30 minutes of their tour. Animations and an interactive quiz show have been developed to tie 1960s events and technology together with the building of the Gateway Arch.”

On an international scale, the refresh of the Gateway Arch monument and surrounding features comes at a time when observation attractions of various kinds are rising fast and altering city skylines around the world. On the local scale, it is complemented by numerous improvements and new attractions in downtown St. Louis over the past few years, such as the recently opened National Blues Museum, Ballpark Village, CityGarden and Peabody Opera House. The Arch has stood the test of time as a unique, innovative structure, icon and destination attraction and augurs well for the future of its city and region. • • • 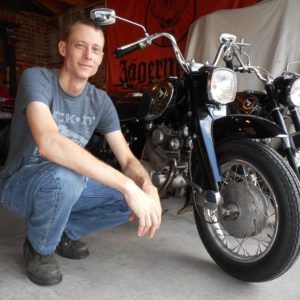 Kevin Dazey has a mechanical engineering background and works in R&D at a manufacturing company in St. Louis. He writes about ride engineering, roller coasters and related topics for InPark. Kevin’s passion for roller coasters and amusement parks began early, while growing up in northeast Ohio near Sea World, Geauga Lake, Cedar Point, and Kennywood. To date, he has visited 41 parks and ridden 235 roller coasters. Besides a fondness for the attractions industry Kevin enjoys maintaining a collection of vintage motorcycles and ATVs. Email: [email protected]

Joe Kleimanhttp://wwww.themedreality.com
Raised in San Diego on theme parks, zoos, and IMAX films, InPark's Senior Correspondent Joe Kleiman would expand his childhood loves into two decades as a projectionist and theater director within the giant screen industry. In addition to his work in commercial and museum operations, Joe has volunteered his time to animal husbandry at leading facilities in California and Texas and has played a leading management role for a number of performing arts companies. Joe previously served as News Editor and has remained a contributing author to InPark Magazine since 2011. HIs writing has also appeared in Sound & Communications, LF Examiner, Jim Hill Media, The Planetarian, Behind the Thrills, and MiceChat His blog, ThemedReality.com takes an unconventional look at the attractions industry. Follow on twitter @ThemesRenewed Joe lives in Sacramento, California with his wife, dog, and a ghost.
Share
Facebook
Twitter
Linkedin
Email
Print
WhatsApp
Pinterest
ReddIt
Tumblr
Previous articleBuilding a Better Attractions Industry in Asia
Next articleRick West, TPA and Midsummer Scream