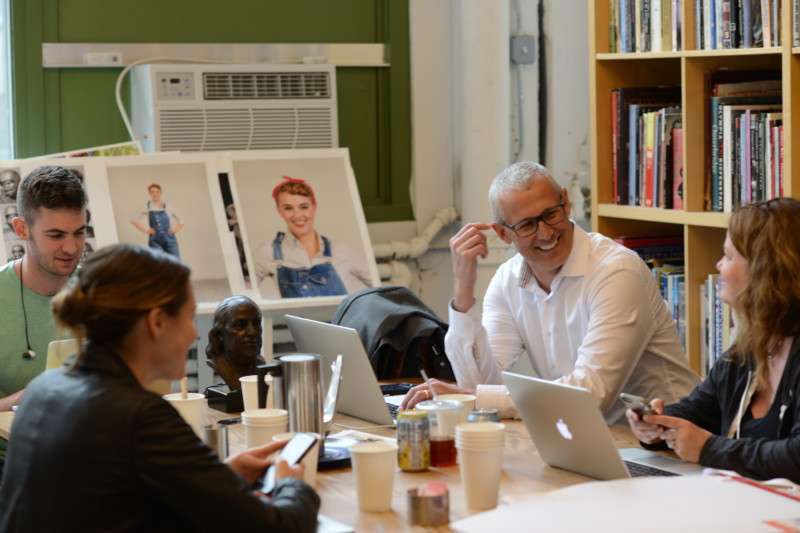 Who knew? The folks at Lagoon Amusement Park knew. “Geoff always had it in him, even when he was 14. We all knew, ‘this kid’s gonna do something great.’”

That’s what Lori Capener says when she talks about Geoff Thatcher today.

Many in the attractions industry first learned the ropes in various facets of park operations in their student years, and from age 14, until his graduation from Brigham Young University with a degree in journalism, young Geoff worked at Lagoon Amusement Park in Farmington, Utah.

He embarked on a newspaper career, but missed the world of the park. “I was used to a place where people were happy and wanted to make others smile,” said Geoff.

ABOVE PHOTO: Geoff Thatcher working with producers from The Brand Experience at StudioEIS, a sculpture studio in Brooklyn in May 2017. Geoff launched his own company, Creative Principals, in July 2017. Photo Credit: Elliot Schwartz.

It had gotten into his blood. Geoff has a knack for creating long lasting relationships, and in the years since leaving Lagoon, has remained in close touch with Capener, who recently retired as art director of the park, and was Geoff’s former supervisor. She and others from the park administration have followed Geoff’s career with interest. They weren’t all that surprised to see him move out of journalism and take his skills back into the industry that had won him over.

Capener described teen Geoff as a “go-to guy, a great kid who worked really hard and did a lot of things for the park. Other than the food I don’t think there’s anything he didn’t touch. He drove our train, served as lifeguard and deck hand to our old, million-gallon pool before we had a waterpark, worked with the animals at the small zoo. He got ready in spring, cleaned up in fall, worked in water areas and merchandise. He could be counted on to do just about anything; he was creative and helpful, and always there when you needed him. He was always ready and willing to do whatever new thing came down the chute, and he was good at motivating others. He was rarin’ to go.”

At least some of these qualities – along with his affection for the industry – showed through when, for a Cincinnati paper in 1994, Geoff interviewed Keith James of Jack Rouse Associates (JRA) for a story (James is now president and CEO of the company). That meeting led to a job offer. Geoff stayed seven years with JRA, and his last title at the company was senior writer and producer.

At Lagoon, Geoff had absorbed everything he could about the operations side of amusement parks; at JRA, he would be exposed to the creative side of the business at one of the top design firms in the industry.

It was a time when “story first” became the rallying cry of themed entertainment; when storytelling was recognized as the primary driver for the creation of visitor attractions.

“Jack Rouse inspired us all to put story first,” said Shawn McCoy, a colleague who started at JRA close to the same time as Geoff, and is now vice president of the firm. “It was a big deal in the 1990s, and it’s a big deal now. Our job is to be audience advocates. Geoff gets that.”

In 2002, Geoff transitioned into the related and growing field of brand experiences and enriched that sector with the storytelling approach that informs successful themed entertainment projects. His new clients appreciated his positive, enthusiastic attitude and laser-focused dedication, just as his former clients had. “Geoff is passionate, hardworking and high-energy,” said McCoy. “He understands about protecting a brand and a character and an IP. But the thing that makes Geoff one of the best at what he does is that he can get to the heart of a story – the emotional takeaway.”

Geoff achieved success with his branding clients – such as Honeywell, Lockheed Martin, Kaiser Permanente, IBM, and University of Phoenix – by applying what he calls The Experience Model. By now, this model may be so embedded in the themed entertainment community that it’s almost taken for granted, but Geoff Thatcher doesn’t. “The Experience Model and the deeper psychology behind it is something really special,” he said. “It’s genius. Give me any experience that doesn’t work right; I can apply this model and find what’s missing.”

The Experience Model has five parts: Icon = Attract, Queue = Trust, Pre-show = Inform, Main Attraction = Internalize, Exit Experience = Act. In the corporate branding world, the formula materializes somewhat differently from an entertainment attraction – it’s story, sequence and flow that matter. “We forget sometimes that a queue isn’t just about a line; it’s about creating an experience where you can build anticipation in the mind of the visitor, and – most importantly – trust,” said Geoff. “And where retail often represents the exit experience in a theme park attraction, in a brand experience it could well be a briefing room where a deal is closed.”

By 2008 – and after a brief stint working on the opening ceremonies of the 2007 Rio Pan American Games as a video producer – Geoff was executive creative director of The Brand Experience. He stayed there until June 2017.

Over the years, brands and IP have assumed a new prominence in entertainment attractions, taking three-dimensional form as part of multifaceted, multiplatform licensing and sponsorship schemes. This evolution has led Geoff back to the heart of the attractions industry and to renew some former working relationships. “I’ve been fortunate to work with JRA, Granaroli Design & Entertainment, Balich Worldwide and The Producers Group on a number of amazing projects since June.,” he said. “It’s felt very natural to return – it’s been fantastic! I love brainstorming, conceptualizing, sharing ideas, working within great teams, and meeting the objectives no matter how fast the pace or intense the deadlines. We’ve won some pitches and delivered on some very successful projects.”

Now, as founder and Chief Creative Officer of his own company, Creative Principals, Geoff is poised to continue on this path.

“Geoff took the storytelling approach into the brand space, and now he’s back helping apply it for branded and IP experiences in the themed entertainment space,” said McCoy. “It goes both ways. Brands and IP are now actively on board for storytelling experiences in a new way; that helped take Geoff full circle, back to the entertainment world, delivering the power of story to the brand and vice versa.”

Adult Geoff Thatcher today brings the same enthusiasm to his work that teenage Geoff Thatcher brought initially, years ago, to Lagoon Amusement Park – whether it was cleanup, feeding the animals or writing titles for training slideshows. “The thing about a park is that you work long hours, and do whatever comes your way,” said Capener. “Not every teenager wants to do that; that’s why Geoff was such a find. Today, he is doing exactly what he should be doing.” •

Creative leadership and the pitch

One of Geoff’s key strengths is the pitch. “The pitch and the presentation are something I excel at and love to do,” he said. “I love to go up against the best in the industry – I love the experience whether I win or lose (but of course I most love winning). I find it joyful, and on a personal and professional level, it’s just very rewarding to do this work. My strength is in creative leadership. I’m a big fan of words and meaning – I am a writer, storyteller, creative director, and art director who works with designers. The reason my company is named Creative ‘Principals’ is that a principal is a leader – someone who excels at what they do. If you have a project that needs creative leadership, that’s where I want you to call me. I can put the team together and bring the pitch. My career is about taking projects from concept to reality.

“Whether I work as a hired creative gun for a larger agency, or directly with a client, the bottom line is these experiences still need to be designed. My clients include design firms, production companies, ad agencies, fabricators and the end client – any group that might be putting together an RFP. I’m obviously very well suited to work on a brand project, but museums and theme parks are also primary markets.”

For more information, visit creativeprincipals.com. Geoff will be attending the 2017 IAAPA Attractions Expo in Orlando this November; you can connect with him on Instagram, Twitter and LinkedIn or email at [email protected]

Kaiser Permanente is one of many clients for whom Geoff put The Experience Model into practice, during his tenure with The Brand Experience. The Kaiser Permanente Center for Total Health endeavors to educate industry leaders, employers and health care consumers about “total health,” a perspective that includes how someone interacts with their environment, their community and other socio-economic factors in addition to clinical care. “Geoff has a great mind; he can really help translate what the bigger vision is by a CEO or CFO, and bring it down to a conversation that anyone can understand and convey what the major areas of focus are for an organization,” said

Keith A. Montgomery, Executive Director at Kaiser Permanente Center for Total Health. The Center had been open about four years when they brought in Geoff and Brand Experience. “It was not really telling our story,” said Montgomery. “Geoff helped us think about what kind of story we wanted to tell and convey what we meant about total health. He conducted interviews with executives across Kaiser Permanente. He led discussions and design charrettes and helped us refine key messages and think about how to deliver them.”

The Center reopened in 2015 with an event for the Surgeon General. “We are more than competitive now,” says Montgomery. “It helps us share what we’ve learned and engage in bigger conversations not only around healthcare delivery but the big picture of health. We are reaching the next generation of healthcare leaders, and more than 95% of visitors rate us highly.” The 15,000-square-foot facility is receiving more than 5,000 visitors and hosting more than 200 meetings a year.

“Story first” clearly worked for this client. “Get your message down, get your story straight and then figure out the right way to engage people,” said Montgomery.

Joe Kleimanhttp://wwww.themedreality.com
Raised in San Diego on theme parks, zoos, and IMAX films, InPark's Senior Correspondent Joe Kleiman would expand his childhood loves into two decades as a projectionist and theater director within the giant screen industry. In addition to his work in commercial and museum operations, Joe has volunteered his time to animal husbandry at leading facilities in California and Texas and has played a leading management role for a number of performing arts companies. Joe previously served as News Editor and has remained a contributing author to InPark Magazine since 2011. HIs writing has also appeared in Sound & Communications, LF Examiner, Jim Hill Media, The Planetarian, Behind the Thrills, and MiceChat His blog, ThemedReality.com takes an unconventional look at the attractions industry. Follow on twitter @ThemesRenewed Joe lives in Sacramento, California with his wife, dog, and a ghost.
Share
Facebook
Twitter
Linkedin
Email
Print
WhatsApp
Pinterest
ReddIt
Tumblr
Previous articleTruly, virtually, Birdly
Next articleMedia playback – Are you being served?